Secretly Republican – the Orthodox Jewish Revolution and Its Opposition 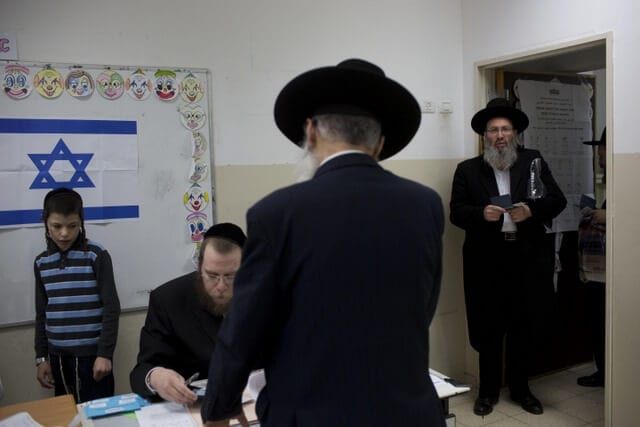 As we are now past Labor Day and have embarked on what is traditionally the start of the season when more people actually begin to pay serious attention to politics, it is perhaps time to remark on a quiet revolution which has been in process over the last 30 years or so, among what has long been a key Democrat constituency. I am speaking of the Jewish vote.

Since roughly the late 1960s, there has been a massive religious revival taking place within the American Jewish community. Known in Jewish circles as the ba‘al tëshuva movement (ba‘al tëshuva being the Hebrew expression for “penitent”), literally hundreds of thousands of American Jews are exploring their roots and returning to Orthodox Jewish practice with the help of numerous outreach organizations and efforts, both local and national in scope. Along with this phenomenon, there is also the simple fact of natural increase among the Orthodox Jewish population: we tend to have much larger families than is the American norm, with an average of 5 – 6 children per family. For both these reasons, the Orthodox Jewish population, across all its various camps (defined in terms of dress, acceptance or rejection of Zionism, etc.), is the only part of the American Jewish community which is actually growing.

The Jewish love affair with the Democrats began in the depths of the Depression with the election of 1932 and the New Deal; before that, there had been a great deal of Jewish support for Republican candidates. Throughout most of the intervening decades, the chief differences between the Democrats and the Republicans had been over the size and scope of government and government spending, and the management of that spending.

Then the conservative movement spearheaded by William F. Buckley began to have its effect, first with the nomination of Barry Goldwater in 1964, then with the “Reagan Revolution” of the 1980s. As the Republican Party has become more conservative, the Democratic Party has correspondingly become an increasingly centrally controlled tool of the ideological Left wedded to policies ever more destructive of the American civil society which the Constitution presupposes, ever more inimical to the principles of Biblical morality.

I am often asked in conservative and Republican circles how and why it is that Jews seem so adamant to support a party, the Democrat Party, that in fact support policies which are the antithesis of Biblical morality. When I reply that the fact is that a majority of Orthodox Jews do not support those policies, I then get socked by a follow-up question: How is it that the largest concentration of Orthodox Jews in the U.S is to be found in a belt along the East Coast stretching from Boston to Baltimore, and yet these states are so unreservedly under Democrat control?

The answer to this is complicated. The leadership of Orthodox Jewish communities tends to be pragmatic and apolitical. The agenda of the rabbis is to encourage ever greater levels of knowledge and observance of Jewish law and custom, striving for greater holiness in their communities; aside from the possible tax-exemption issues for synagogues and other institutions, political controversies tend to get in the way and divide congregations. To the extent that communal organizations, such as Agudath Israel of America (of which I am a proud member of over 40 years’ standing), seek to influence government decisions and policies, they tend to work with the government which is already in power whenever possible. That said, Agudath Israel has always been famous for maintaining cordial relations with elected officials of both parties. When the Republicans took over Congress in 1994, other Jewish organizations who had been in bed only with the Democrats found themselves at sea. The Aguda had contacts with Republican legislators who were now chairing committees and setting the agenda.

So the issues of major importance to religious Jews at the national level are often not the same at the state and local level, and the political responses are not the same. There are state legislators (for example, long-serving New York Assemblyman Dov Hikind and New York state Senator Simcha Felder) who are quite conservative on many points, but feel that they must run as Democrats to get elected (much like now nationally famous Milwaukee County Sheriff David Clarke). It is only because Felder, though a Democrat, caucuses with the Republicans that the GOP has control of the New York State Senate at present.

Most recently, the state and local Democrat parties in the northeast (and elsewhere) have come more and more under the centralized control of the national party, and this has prompted a “second look,” as it were, at traditional political loyalties, the quiet revolution to which the title of this piece refers. But this “second look” at the Republicans is hampered by some local conditions.

Take the saga of Rockland County, New York, as an example. Beginning some 25 years ago, the demographics of this suburban county began to change noticeably, with a massive influx of Orthodox Jews and especially chassidic Jews, whose dress, customs, and adherence to the Yiddish language make them very visible and set them apart even from other Orthodox Jews.

The result of this influx has been a corresponding (obviously voluntary; they sold their homes for attractive prices) outflow of the previous inhabitants of the county, and has caused a measure of backlash, which has frequently turned ugly, among those who have remained behind. This has taken the form of zoning battles in the attempt to make it unattractive, if not impossible, for synagogues, religious schools or an eiruv (a symbolic enclosure making it possible for Orthodox Jews to carry objects between residences and synagogues on the sabbath) to be established. Though most of these battles have been fought in the courts and religious accommodation has generally prevailed, hard feelings and resentments have not abated.

The local Republican Party, frustrated by decades-long domination of New York politics by the Democrats, has short-sightedly seized on this animosity as an issue, and has recklessly exploited it in ways far more worthy of the identity politics we ordinarily associate with the Democrats, trying to stymie what should be a natural alliance of socially very conservative voters with strong national security wishes with the Republican Party.

A major flashpoint has become the East Ramapo Central School District in the county. The district’s residents are overwhelmingly Orthodox Jews, and a very high proportion of them are chassidim. This has resulted in two eventualities which are in fundamental conflict: First, of the 33,000 or so children resident in the district, all but about 9,000 attend private schools; and second, most of the members of the school board are Orthodox Jews.

A certain degree of tension stems from the nexus of several facts, which can be presented briefly and laconically:

This, as you might imagine, has caused a toxic mix, with numerous vociferous (though largely unsubstantiated) cries of cronyism, favoritism and neglect of the public schools in favor of the private yeshivoth. A movement has arisen demonizing Orthodox Jews in general and chassidim in particular, calling itself the “Block the Block Vote” (from the claim that chassidim vote Democratic in lockstep), with strong anti-Jewish overtones (the adherents of the movement disclaim anti-Semitism since some of their members are secular Jews who, for whatever reasons, resent the Orthodox influx). The local Republican Party has seized on this as an issue in local elections, and the poison has begun to make itself felt in the state legislature as well.

As a result, rather than amending the state funding formula to address the unforeseen problems caused by conflicting state laws in this unique district, the state legislature has imposed a fiscal monitor on the duly elected school board to report on all the board’s decisions. In an uneasy, last-minute compromise, the monitor was not given veto power over those decisions as had originally been demanded.

This is another example of frustration at the fringe of the Republican Party and the general replacement of data, logic and sober analysis with raw anger; this is the sort of frustration driving the prominence of Donald Trump and the other two unvetted, amateur candidates, and driving such highly qualified Washington outsiders as Rick Perry and now Scott Walker out of the running.

We should all be very concerned.

Why Are Jews Liberal?