The COVID school closures once championed by Randi Weingarten and her American Federation of Teachers are being memory-holed as public opinion stiffens against further extreme measures.

It was just last week that AFT chief Weingarten was siding with teachers demanding more school closures and more half days because they “need to take a break from stress.”

In May of this year, Weingarten was caught using her weight with the Biden administration to change CDC guidance on school closures, remote work concessions, and more.

Weingarten and other union officials have lobbied for schools to remain virtual at least in part. The AFT even reportedly had influence over the Biden administration’s guidance for reopening schools. AFT and other teachers unions also bankrolled Democrat lawmakers this past year for continually keeping schools closed.

At the time, Weingarten was claiming to believe that “We can and we must reopen schools in the fall for in-person teaching, learning and support. And we must keep them open fully and safely five days a week.”

Her actions since then give the lie to those words. “Don’t let Randi Weingarten whitewash her role in school closures” was Karol Markowicz’s advice last summer, and it holds true today.

It was almost amusing — almost — when local AFT-affiliated unions were pushing “Wealth Taxes, Charter School Bans, and Medicare for All Before Schools Can Reopen.”

What does any of that have to do with COVID? Nothing, but any excuse will do to push Weingarten’s agenda of less work and more money.

Educators across the country are burnt out, overwhelmed, and under-resourced, resulting in a massive teacher shortage that leaves students without permanent teachers in their classrooms and parents, caregivers and other school staff struggling to fill in the gaps. pic.twitter.com/OWuEbzHHO2

But now, Weingarten is using the power of her AFT union plus the AFL-CIO to memory-hole all that and re-write history, Oceania-style.

Also for our VIPs: Good News Out of South Africa DESTROYS the Omicron Narrative 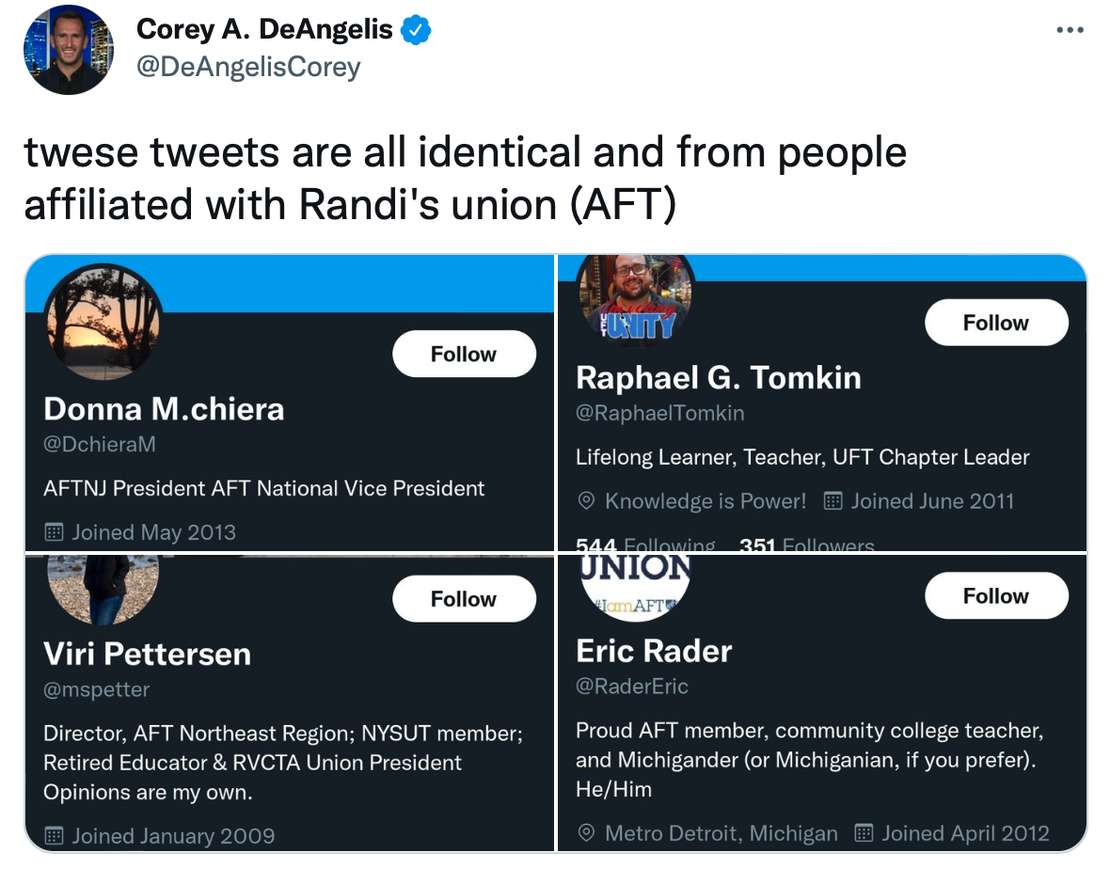 “AFL-CIO is also promoting the propaganda. They’re the largest federation of unions in the U.S.,” tweeted DeAngelis. “Randi’s AFT is one of their member unions.”

Today’s AFT pushback against reality is due to a debunked (and widely ridiculed) New York Times column from last week.

Here’s what David Rutz had to say about that:

Michelle Goldberg, a left-wing voice on the Times’ largely progressive columnist roster, called Weingarten “misunderstood” and said the president of the American Federation of Teachers was the unfortunate target of “anger at public schools.”

Parents across the country have been frustrated by the damage done to students by lockdowns and remote schooling, and Weingarten’s about-face on school openings after threatening strikes in 2020 if certain safety measures were not met has been fiercely criticized.

Plus: “As recently as this summer, Weingarten was noncommittal, saying we’re ‘going to try’ to open schools fully, five days a week.”

Putting all the pieces together, here’s what seems to have happened.

NYT’s Goldberg provided air cover for Weingarten’s claims as parents around the nation have had it up to here with closures and half days. When Goldberg was called out, Weingarten’s big-union machinery geared up into action on Monday to push the false narrative even harder.

Because the Left has no shame. When busted, they rarely back off but instead double down.

Here’s a bust so clear-cut that it’s impossible for a sane person to believe it might work.

But no one ever accused the Left of a surplus of sanity.