Notice I wrote “officially.” We’ll circle back to that in a moment.

You know, when I saw deranged Congresscritter Pramila Jayapal (D-Drug Induced State) make this claim over the weekend, I figured it was just a member of America’s second-least intelligent class (just ahead of journalists) spouting off nonsense that just happened to be more nonsensical than usual.

Like that time AOC wore a “Tax the Rich” gown to one of America’s most blatant tax write-off events.

It’s more like When a Stranger Calls: The “zero dollars” meme is coming from inside the White House. 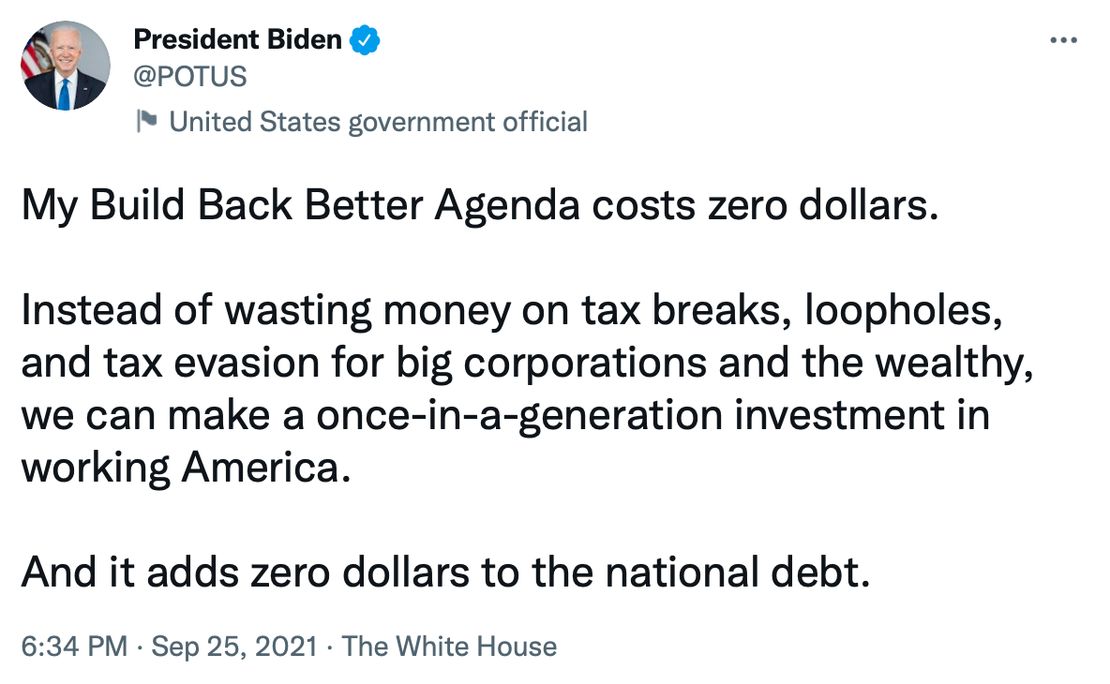 While Biden’s tax hikes promise to raise the $3.5 trillion necessary to pay for the spending-and-regulation behemoth currently working through both sides of Congress, an independent analysis from July revealed that “the real cost is $5 trillion or more.”

The Democrats’ smoke-and-mirrors approach to budgeting isn’t just about masking the topline number, it’s about sneaking the bill past the Senate’s reconciliation rules:

Their plan is to include every program but start small and pretend they’re temporary. This will let them skirt the budget-reconciliation rule that spending can’t add to the deficit outside a 10-year budget window without triggering a 60-vote threshold to pass.

Worse — or better, if you hate taxes as much as I do — Biden’s $3.33 trillion tax hike would likely only raise $2.1 trillion in actual revenue. That’s according to the left-leaning Tax Policy Center.

Recommended: Photographer Who Took the Picture Has Some Bad News for the #WhipGate Crowd

In other words, Biden’s “adds zero dollars to the national debt” pledge is only off by about THREE TRILLION DOLLARS.

But even if the bill is as “small” as promised and even if the tax hikes actually raised the promised revenue and even if all this taxing and spending and regulating somehow doesn’t add anything to the debt, it’s still trillions of dollars in new costs.

Where I come from, “trillions of dollars” is not the same as “zero dollars.”

As Longtime Sharp VodkaPundit Readers™ are already aware, the Congressional Progressive Caucus (CPC) is threatening to kill the smaller (but bipartisan) mock-infrastructure bill if they don’t get every last cent of the $3.5 trillion plan opposed (in part) by Senate moderate Dems Joe Manchin and Kyrsten Sinema.

Sunday night, Pelosi had to postpone Monday’s planned vote on the bill until Thursday, in what the Washington Post described as “a victory for muscle-flexing progressives” like Jayapal. According to WaPo, Jayapal claims to have around 60 “no” votes if the prog caucus doesn’t get both bills in full.

I’m guessing that the Pelosi-vs-CPC behind-the-scenes shenanigans are the reason why the White House finds itself having to push the absolutely stupidest lie ever, that massive tax increases plus massive debt somehow equals zero dollars.

Steve launched VodkaPundit on a well-planned whim in 2002, and has been with PJ Media since its launch in 2005. He served as one of the hosts of PJTV, a pioneer in internet broadcasting. He also cohosts "Right Angle" with Bill Whittle and Scott Ott at BillWhittle.com. He lives with his wife and sons in the wooded hills of Monument, Colorado, where he enjoys the occasional adult beverage.
Read more by Stephen Green
Tags: SPENDING