Insanity Wrap: California Bleeding: More Business Have Already Fled This Year Than All of 2020

Welcome to Insanity Wrap, your daily dose of the best of the worst. California bleeding businesses, jobs, revenues… is today’s big crazy.

Jeb Bush and I want conservatives to take action on climate change! pic.twitter.com/4AiSAK71OE

We will not clap and you cannot make us.

Stanford Study: More Businesses Have Already Fled California This Year Than in All of 2020

“California,” Brad Polumbo writes, “has regulated and taxed its once-thriving economy into a coma.”

Everyone seems to know someone who has packed up and left the once-Golden State. But two Stanford researchers looked past the anecdotes to find “a damning trend.”

The study also reports that the rate at which businesses are leaving the state is rapidly accelerating. For the first six months of 2021, the rate is nearly twice as high as it was last year. That means more businesses have already left California this year than in all of 2020.

The authors note that this count is, if anything, an enormous underestimate. Many small businesses exiting the state do not receive media coverage and are not required to file compliance reports, so many of their exits go uncounted in the analysis.

Why are businesses leaving? The authors give the exact reasons you’d expect, gentle reader. They cite “high tax rates, punitive regulations, high labor costs, high utility and energy costs, and declining quality of life for many Californians which reflects the cost of living and housing affordability.”

Other than that, how did you enjoy doing business in California, Mrs. Lincoln?

The California Dream is dead, and just like Giuliani’s New York City, Democrats killed it.

There’s an excellent if underappreciated, Billy Joel rocker about 1970s Los Angeles that no longer exists. Here’s the first verse from “Los Angelenos.”

Americans used to flock to California from the other 49 states to pursue opportunity and an easy-going, live-and-let-live lifestyle.

Now, unless you’ve got a Silicon Valley startup idea, the opportunities are slim, and live-and-let-live has been replaced with a stultifying “progressive” orthodoxy and weaponized Karenism.

Americans and foreigners seeking generous and easy-to-get welfare benefits make up what remains of the inflow to the state.

California was once a great place, but Insanity Wrap could see the writing on the wall when we scurried out of there over a quarter-century ago.

2 people walk out of an Oregon Lowe’s with carts of stolen merchandise.
Employees look on and are unable to do anything. pic.twitter.com/bHBy1M8HVK

Insanity Wrap isn’t sure exactly what it is these fit and healthy-looking young men are protesting, but we’re certain it must be something so protest-worthy that if you were to ask them, they might even come up with a semi-intelligible answer. 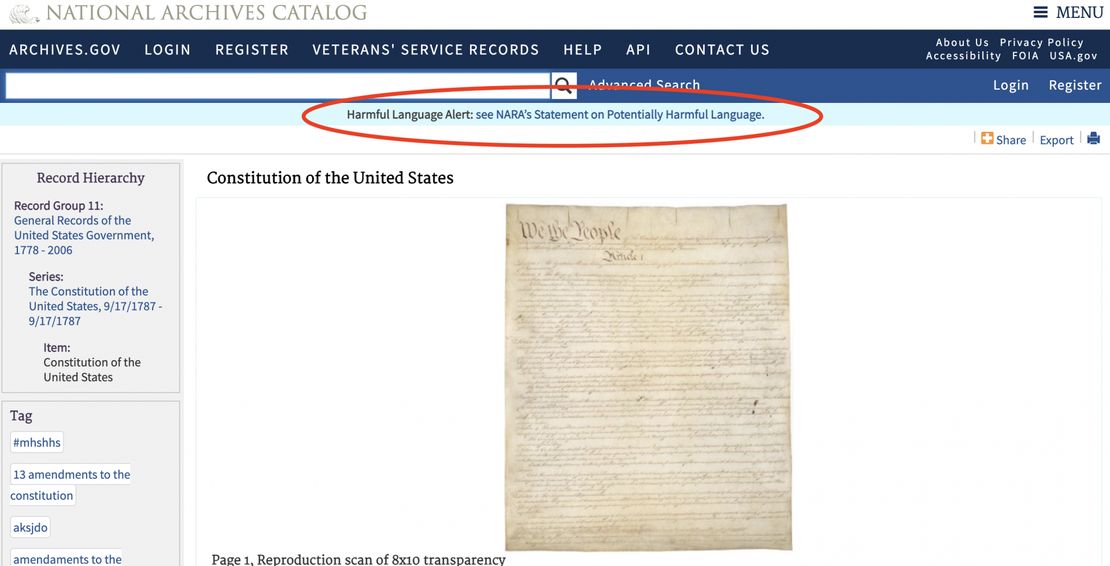 Ladies and gentlemen, are National Archives are now a part of the cultural asylum dominating American discourse:

The alert now appears on many pages on the archives.org website, and links to a page entitled “NARA’s Statement on Potentially Harmful Content,” which they define as:

• be discriminatory towards or exclude diverse views on sexuality, gender, religion, and more;

• demonstrate bias and exclusion in institutional collecting and digitization policies.

It’s a not-at-all-believable-but-who-cares modern-day Indiana-Jones-style swashbuckler involving a secret map hidden on the back of the Declaration of Independence stored at the National Archives, and of course, the good guys have to steal it to stop the bad guys from doing their bad guy thing with it.

The movie is charming in no small part because of the pains historian Cage goes through to protect the very document he’s heisted from the Archives.

This means we’ve now arrived at a point when a silly Disney adventure flick shows more respect for our national archives than does our National Archives. 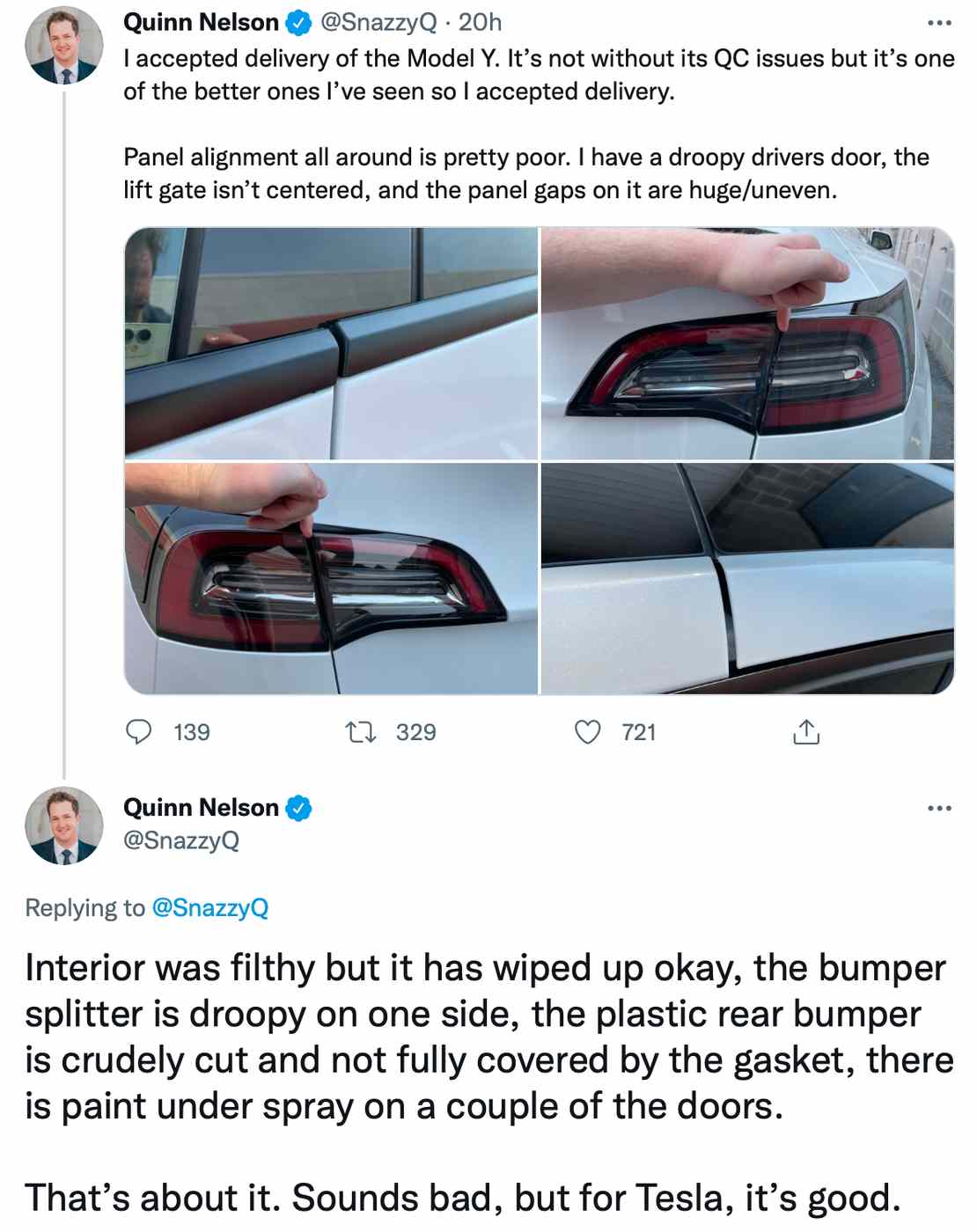 “Sounds bad, but for Tesla, it’s good,” probably isn’t the endorsement Quinn Nelson thought it would be, but he’s also genuinely excited about having just spent tens of thousands of dollars on a car with shoddy QC.

An Ohio judge on Monday ruled a hospital no longer had to give a COVID-19 patient ivermectin, reversing a previous decision from another judge.

“While this court is sympathetic to the Plaintiff and understands the idea of wanting to do anything to help her loved one, public policy should not and does not support allowing a physician to try ‘any’ type of treatment on human beings,” Common Pleas Judge Michael Oster said in the court order.

Insanity Wrap will remain agnostic on the efficacy of ivermectin for the Wuhan Flu until more data becomes available.

However, we remain steadfast in our dedication to individual liberty which, yes, includes the freedom to try any medical remedy for what ails you.

If only the Constitution were a much longer and heavier document, Insanity Wrap would recommend whacking Judge Oster upside the head with a rolled-up copy of it.

Previously On Insanity Wrap: Let’s Punish People for Getting Vaccinated

Steve launched VodkaPundit on a well-planned whim in 2002, and has been with PJ Media since its launch in 2005. He served as one of the hosts of PJTV, a pioneer in internet broadcasting. He also cohosts "Right Angle" with Bill Whittle and Scott Ott at BillWhittle.com. He lives with his wife and sons in the wooded hills of Monument, Colorado, where he enjoys the occasional adult beverage.
Read more by Stephen Green
Tags: CALIFORNIA CONSERVATISM INSANITY WRAP