Six states, led by California’s fulltime climate alarmists, this week enacted a ban on the sales of high-end gaming computers.

Niche Gamer reports that Dell is already following the 2017 law that just went into effect. According to the gamer-focused site, Dell has “pulled the sale of seven of its eight Alienware gaming desktops” from California, Colorado, Hawaii, Oregon, Vermont, and Washington.

Trying to order one of the banned machines will trigger an alert: “This product cannot be shipped to the states of California, Colorado, Hawaii, Oregon, Vermont or Washington due to power consumption regulations adopted by those states. Any orders placed that are bound for those states will be canceled.”

The offending component would seem to be the power-hungry NVIDIA GeForce RTX 3070 graphics card, but it’s no problem to order the card separately and install it yourself. I tried ordering one from Amazon without any hassle.

Did more research on California's pc ban. Too much clickbait..

Pre-built pcs seem affected but you can build your own just fine if I'm not mistaken.

Pretty retarded cause pc gaming is nearly as bad as the fucking megacorps ass blasting the environment magnitudes more.

Since gamers typically love customizing or even building their own gaming machines, the six-state ban seems somewhat unlikely (cough, cough) to have much effect on the power consumed by gamers.

It’s true that graphics cards like NVIDIA’s 3070 consume a lot of power — up to 220 watts, plus whatever the rest of the PC’s components and monitor require. However, a Sony PlayStation 5 console draws not much less at 200 watts, but the California law (and its copycats in those five other states) places no restrictions on console sales.

A 2019 report from the California Energy Commission notes that “computer gaming in California consumed 4.1 terawatt-hours/year in 2016,” but that’s a small fraction of the amount of energy consumed by, say, a typical Google datacenter. On average, those use about “200 terawatt hours (TWh) each year.” 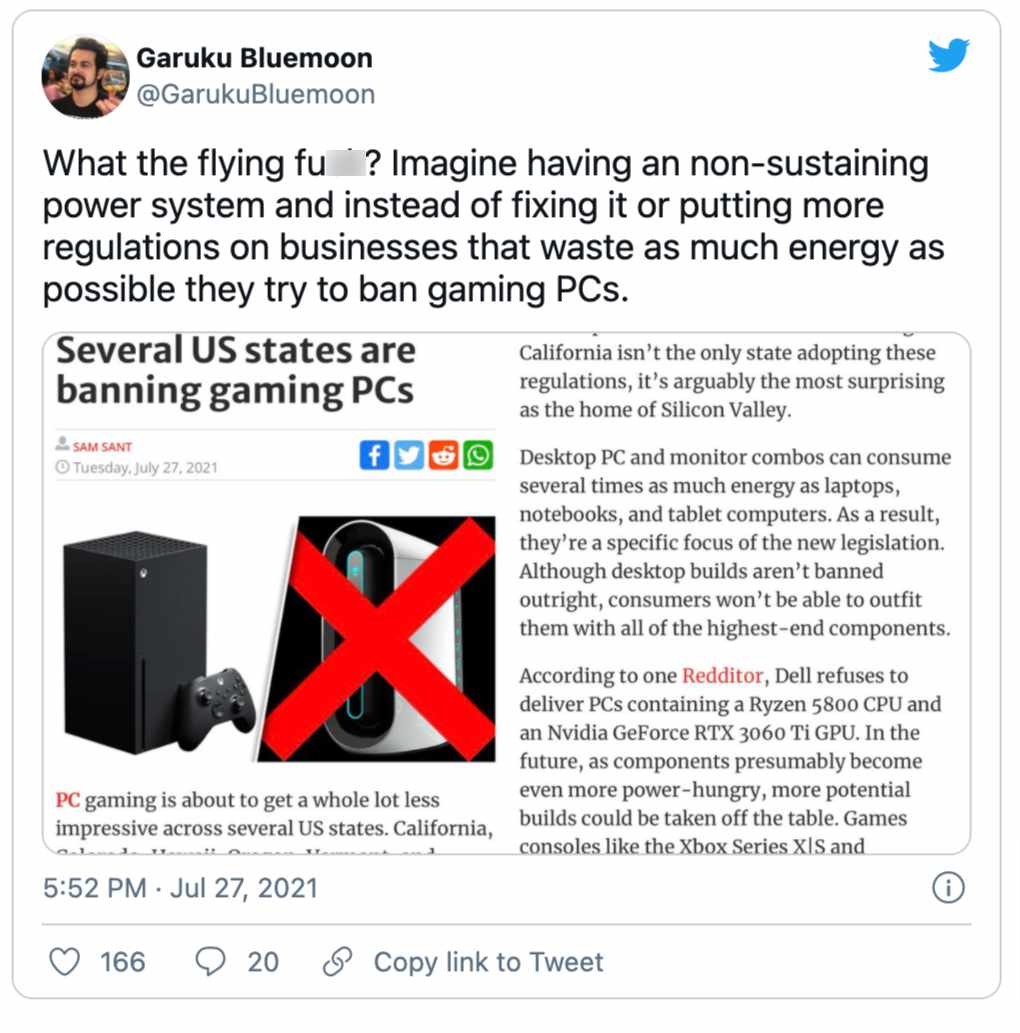 According to DataCenters.com, there are currently “197 data centers in California.”

If my math is right — and it is — data centers in California consume roughly 10,000 times more energy than gamers do.

Recommended: Cruz Rips Biden a New One (Or Two) for ‘Spooning’ with Putin

But Google and Apple and Twitter and Facebook can afford pricy Sacramento lobbyists. A gamer streaming on Twitch from his basement is a much easier target for feel-good legislators. And since gamers are more likely to be white and male than is average, they make a popular target for California’s progressives.

The gaming PC ban might seem like a trivial issue, but to me it really does exemplify what people call anarcho-tyranny. Many parts of California allow people to steal, defecate in public, use drugs, etc without prosecution. But your life is micromanaged by incompetent morons.

Gaming PCs are so far down the list of California’s problems that there will probably be a new generation of graphics cards available before we even find it.

But then they’ll ban those, too.

Steve launched VodkaPundit on a well-planned whim in 2002, and has been with PJ Media since its launch in 2005. He served as one of the hosts of PJTV, a pioneer in internet broadcasting. He also cohosts "Right Angle" with Bill Whittle and Scott Ott at BillWhittle.com. He lives with his wife and sons in the wooded hills of Monument, Colorado, where he enjoys the occasional adult beverage.
Read more by Stephen Green
Tags: CALIFORNIA MADNESS CONSERVATISM ENVIRONMENT VIDEO GAMES