Answer: When they’re establishing #Unity whether you want it or not.

Physics prof wants to ban the term ‘quantum supremacy.’ Can you guess why?

If you need more than one guess, then you must be new to Insanity Wrap.

The reason is, indeed, exactly what you think it is:

A new opinion editorial published by the Scientific American, co-authored by physics professor Ian Durham of St. Anselm College in Manchester, New Hampshire, argued that the term “quantum supremacy” should be abandoned because it shares a word with the term “white supremacy.”

Durham wrote that given the lack of diversity in physics and computing, the use of “‘quantum supremacy’ can come across as adding insult to injury.”

The piece suggested the use of “quantum primacy” instead.

By that logic, the progressive left should stop using the phrase “anti-racism” because it shares a word with “pro-racism.”

Also, since it’s code for “unadulterated Marxism,” maybe they just ought to stick with that for honesty’s sake.

Stories like this one make Insanity Wrap wish for just one thing: That we lived in a world sane enough that we could forever retire this column.

On the other hand: Job security.

The World Will End. Soon. This Time. We Swear.

You might remember late last year a study was published arguing that hurricanes were staying stronger, longer over land, looking at 1967-2018

Plus: “New study looks at a longer time period-1900-2019-finds over the period of record that storms are actually weakening faster (non-sig downward trend), even after removing outliers. ‘There is no significant linear trend throughout the whole 120-year period.'”

We saved the world.

Back to work now, OK?

Previously On Insanity Wrap: Did Joe Biden Just Fake Taking a Question from the Press? 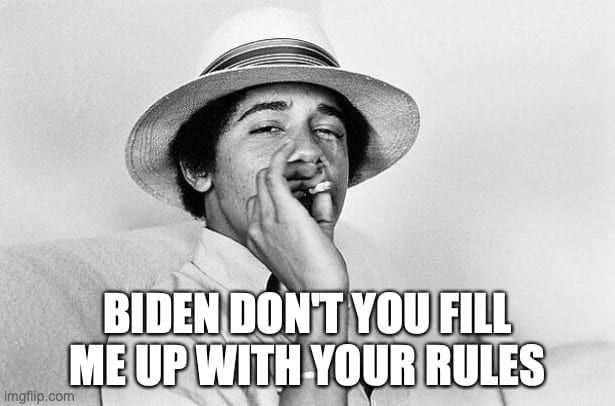 Today’s craziest person in the world is anyone still thinking that the culturally intolerant and increasingly doddering gang of septuagenarians and octogenarians led anything resembling a “party of youth.”

The Democrats, whatever they are, ain’t that. Maleducated young people are their shock troops and useful idiots, nothing more.

Anyway, Insanity Wrap wouldn’t deny you the useful details, so here you go:

Dozens of young White House staffers have been suspended, asked to resign, or placed in a remote work program due to past marijuana use, frustrating staffers who were pleased by initial indications from the Biden administration that recreational use of cannabis would not be immediately disqualifying for would-be personnel, according to three people familiar with the situation.

The policy has even affected staffers whose marijuana use was exclusive to one of the 14 states—and the District of Columbia—where cannabis is legal. Sources familiar with the matter also said a number of young staffers were either put on probation or canned because they revealed past marijuana use in an official document they filled out as part of the lengthy background check for a position in the Biden White House.

In some cases, staffers were informally told by transition higher-ups ahead of formally joining the administration that they would likely overlook some past marijuana use, only to be asked later to resign.

“Maybe,” we can hear some mid-level Biden functionary explain, “you should have ‘just said no.'”

Insanity Wrap would prefer it if we didn’t have stoners at, say, Defense. When that emergency phone call comes in at 9 p.m. on a Tuesday night, you don’t want anyone drunk (that would be us) or stoned picking that up.

Wait, so if an African-American gentleman put up a sign "F*** the police", or "F*** whiteness" it is perfectly acceptable for the police to go and try to intimidate him?

“Even if something is not a criminal case, a perpetrator being confronted by the city, whether it’s NYPD or another agency, and being told that what they’ve done was very hurtful to another person—and could, if ever repeated, lead to criminal charges—that’s another important piece of the puzzle,” de Blasio said.

Officers, de Blasio continued, should evaluate “if someone has done something wrong” even if it’s not illegal or criminal and take action from there.

If the police showed up at Insanity Wrap’s door to intimidate us over something legal we’d done, it certainly would make us think — just not about what we’d done.

With apologies to Tom Wolfe, the dark night of fascism is always descending in the United States and yet lands only in Democrat strongholds.

Insanity Wrap raises our Bloody Mary to Brown University’s Emily Oster for writing this, and to The Atlantic for publishing it:

The best available research indicates that families with young children don’t, in fact, have to live like it’s 2020 until 2022. Parents can go ahead and plan on barbecues and even vacations. The explanation for why lies in the resilience of kids to COVID-19, and in herd immunity.

Children are not at high risk for COVID-19. We’ve known since early in the pandemic that they are much less likely to fall ill, especially seriously ill. Although scientists don’t quite understand why, kids seem to be naturally protected. As a result, you can think of your son or daughter as an already vaccinated grandparent.

Now if we could just do something about the airlines no longer serving alcohol on board, Insanity Wrap & Family would be out of here before the sun sets.

Insanity Wrap would like to apologize for replacing today’s celebrity nonsense with a celebrity making sense — but when it’s Gina Carano, we were certain you’d forgive us.

Maybe we shouldn’t have laughed…

Steve launched VodkaPundit on a well-planned whim in 2002, and has been with PJ Media since its launch in 2005. He served as one of the hosts of PJTV, a pioneer in internet broadcasting. He also cohosts "Right Angle" with Bill Whittle and Scott Ott at BillWhittle.com. He lives with his wife and sons in the wooded hills of Monument, Colorado, where he enjoys the occasional adult beverage.
Read more by Stephen Green
Tags: JOE BIDEN RACISM INSANITY WRAP