Insanity Wrap needs to know: Could there be actual reporting going on inside the White House Press Briefing Room?

Answer: We’ll get back to you on that one — we need to sit down for a minute.

We closed schools and disrupted the most vital element of our children's lives – education.

Let this serve as your occasional reminder that while Insanity Wrap believes in public education, we have lost faith in so many of our public educators.

Given that our choices are between the Kansas City Chiefs and the Tampa Bay Tom Brady, Insanity Wrap doesn’t anticipate doing much cheering.

The federal agency says virtual watch parties or spaced-out outdoor gatherings are the safest bets for catching the big game during the COVID-19 pandemic.

But if you are venturing out to a gathering with members outside your household, the CDC warns against “shouting, cheering loudly, or singing” as the Kansas City Chiefs take on the Tampa Bay Buccaneers.

Nannystaters seek to take the fun out of literally everything.

If (unlike Insanity Wrap) you have a dog in Sunday’s fight, cheer them on. 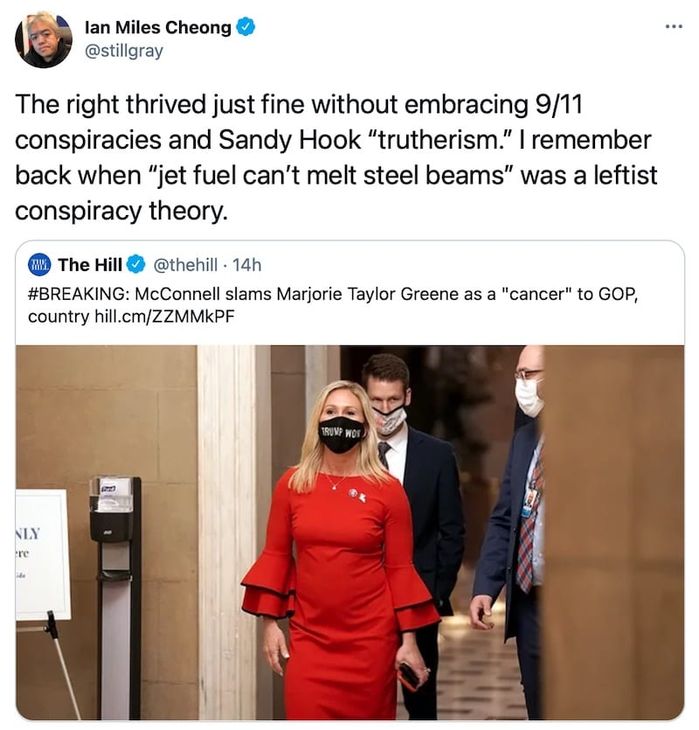 Insanity Wrap is here to share the bad news: If Marjorie Taylor Greene is cancer — and she is — it’s because she chose to make herself that way.

On the other hand, we have no clue what Senator Mitch McConnell is doing weighing in on GOP House business, other than some virtue signaling to people who despise him.

As Insanity Wrap wrote last week: Both sides have their fair share of crazies, and for as long as the media would rather play Partisan Gotcha than commit to the hard work of fair and honest reporting, we’ll have to police our own.

Ideally, that’s up to the voters of each district, but in Greene’s case, it’s difficult for Insanity Wrap to be bothered much by the pile-on.

Do They Miss Trump Yet? CNN Experienced a Massive Ratings Crash During Biden’s First Week

Does reality continue to function by a predictable set of knowable rules?

One of those rules is that the people know what they want and deserve to get it good and hard.

CNN was on a mission to help derail the Trump presidency and with that mission now completed, it would appear that CNN’s usefulness has run out for most people.

According to Variety, CNN without Trump is like a flower without sunlight. It’s quickly wilting and withering away without the light by which it grew fat and healthy for years. Without a target through which to channel all of its hatred and paranoia-inducing reporting, CNN is losing nearly half its audience during its prime-time hours.

There is so much schaden in our freude that it ought to be illegal.

But this Daily Beast report concerns us for a couple of reasons that we’ll get to momentarily:

If you’re a reporter with a tough question for the White House press secretary, Joe Biden’s staff wouldn’t mind knowing about it in advance.

According to three sources with knowledge of the matter, as well as written communications reviewed by The Daily Beast, the new president’s communications staff have already on occasion probed reporters to see what questions they plan on asking new White House Press Secretary Jen Psaki when called upon during briefings.

The requests prompted concerns among the White House press corps, whose members, like many reporters, are sensitive to the perception that they are coordinating with political communications staffers.

“On occasion” and “perception” read to Insanity Wrap like weasel words designed to minimize the impact of the story, particularly since they all appear in the first three grafs.

The most damning parts of Tani’s story don’t come until the seventh graf and later, well below the virtual “fold” past which many people don’t bother to read.

Biden’s press team did not deny that staffers had solicited questions from reporters. But the White House contended that it has tried to foster a better relationship with the press corps than the previous administration, and has tried to reach out to reporters directly in order to avoid appearing to dodge questions during briefings.

Insanity Wrap just has to laugh at the lack of self-awareness by all players involved here, from the Asterisk White House all the way down to Tani himself.

In fact, the lack of self-awareness is so complete that Insanity Wrap literally figuratively can’t even — whatever that means.

Everybody has their part to play in the kabuki theater of White House press briefings, and if the press fails to play its part by presenting a “fair” number of gotcha questions — even to a friendly administration — then they lose ratings.

They can’t have that.

So while the Biden administration seems to be hoping for a completely supine press, even the White House Press Corps is going to push back on that. 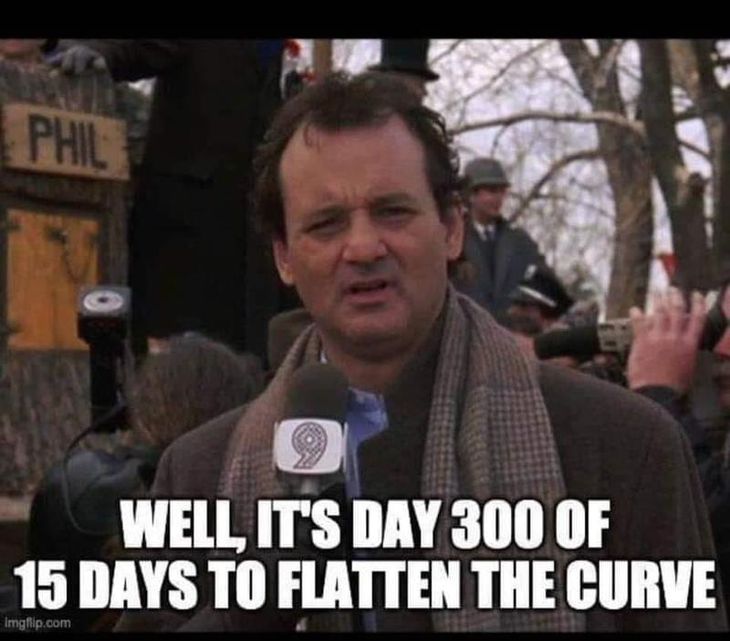 If Insanity Wrap has to be trapped in a Bill Murray movie, we were really hoping for Meatballs. Or better yet, Wild Things.

Instead, we get Groundhog Day re-written by some Woke 27-year-old who knows literally nothing.

Previously On Insanity Wrap: Sheila Jackson-Lee Will Decide if You’re Sane Enough to Buy a Gun

Previously On Insanity Wrap: Intriguing – Palm Beach to Decide Whether Trump Can Live in the Building He Owns