Insanity Wrap needs to know: If the COVID-19 science is so settled, why is Gavin Newsom loosening his state’s draconian lockdown restrictions?

BREAKING: Biden furious at Gavin Newsom for lifting stay-at-home order. Thinks he is only doing it out of re-election fears. "Steam coming out of his ears," per WH official.

Don’t you just love kicking off the day with a little blue-on-blue action?

Florida isn’t locked down, and is doing about the same as New York and California with their quite strict lockdown orders.

California this winter “emerged as a leading U.S. epicenter of the pandemic despite re-imposing some of the most stringent restrictions on social gatherings and business activity.”

Peru had the world’s most severe restrictions and the among the worst mortality rates.

New Zealand — a couple of islands neighboring nothing but one another — closed down incoming travel almost immediately and still couldn’t keep the Wuhan Flu at bay.

It’s almost as though we’re in a pandemic involving a highly contagious respiratory bug.

Newsom has been expertly avoiding the science his own self, enjoying all the best California life has to offer — all while imposing thuggish “SCIENCE!” on millions of Californians.

Now that the “SCIENCE!” is a threat to his position — there’s a recall movement gaining traction that Insanity Wrap is watching with evil glee — Newsom is backing off the lockdowns.

President Joe Asterisk has no clue what’s going on, but he has been told that if everyone hides in their basements it will someday be over and nothing bad will ever, ever happen.

So Joe is mad at Newsom, even though Newsom is doing the right thing (albeit for the wrong reason), while Biden needs everyone to keep doing the wrong thing for any reason because…

…well, because that’s what he’s been told, Insanity Wrap is forced to conclude.

It’s clear to Insanity Wrap from this next item that Biden has been reduced to saying what he’s told.

Watch the first 30 seconds of this video.

That’s all we could watch, but it was enough.

Insanity Wrap skipped watching any of the Fauxnaugeration, so we had to take people at their word that his speech was at least adequate.

Now we can say with assurance: Bull.

The man’s enunciation has gone downhill like the first drop on a roller coaster, except that the coaster goes back up sometimes.

Worse is Biden’s blank affect and delivery, as though there’s little feeling or even comprehension for the words he’s saying.

Do we have an over/under date yet on President Harris?

Insanity Wrap figured two-plus years, but now we’re not so sure.

Insanity Wrap figuratively can barely even.

(We’re not quite sure what that means, either.)

How desperate and/or ill-informed does a WaPo opinion writer like Paul Waldman have to be to push the notion that the Right would quiver at putting Harriet Tubman on the twenty?

As Alex Jeffries noted on Twitter, “The push for removing the founder of the Dem Party from the $20 and replacing him with the Republican Tubman has only come from GOPers, conservatives, and/or libertarians that I’ve seen.”

Still, we’re hoping for the totally kickass version of Tubman with the welcoming hand outstretched forward and the pistol at the ready in the other hand.

Tubman deserves better than the stuffy portrait preferred by the progs.

Previously On Insanity Wrap: One Day With Joe Biden and Everything Has Gone to Hell Already

According to this professor, ‘Science, statistics, and technology are all inherently racist’

Is the one who pays any attention to this guy:

“Science, statistics, and technology are all inherently racist because they are developed by racists who live in a racist society, whether they identify as racists or not,” Loomis tweeted in reference to a New York Times article.

“This is why I have so much contempt for those, including many liberals, who ‘just want the data.’ The data is racist!”

You’d think a bigshot professor would know that “data” is plural.

And also not racist.

You, gentle reader, will not be shocked when Insanity Wrap tells you that Loomis specializes in “labor history, environmental history, and the history of global capitalism.”

Nothing, in other words, requiring any understanding of the difficult stuff — the science, statistics, and technology he disdains.

A year at the University of Rhode Island where Loomis teaches costs $30,846 for residents and $47,966 for non-residents. 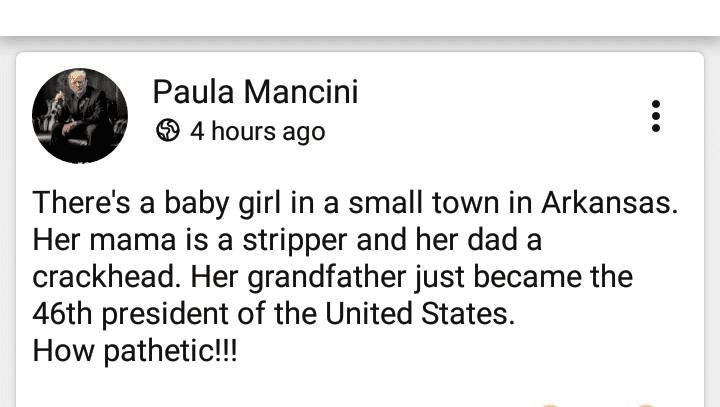 Insanity Wrap doesn’t know that poor kid’s identity and doesn’t want to know — the children (not yet grown) and grandchildren (ditto) of the president are and ought to be off-limits.

But given the semi-official neglect, we can only hope that child never learns the identity of her grandfather.

You can imagine things more tragic, but only with effort.

Biden—30+ in his first five days in office

Remind me again which president governs like a dictator?

Today would be a fine day to trouble your progressive friends with a fact or three.

There is not enough cocaine in the world for any of that to happen, and Hunter should know.

It’s Different When He Does It

The mayor of Portland, where official city policy since last summer has been to catch (sometimes) and release (nearly always) the city’s partly violent insurrectionists.

That guy did this:

“I clearly informed him that he needed to back off. He did not do so I informed him that I was carrying pepper spray and that I would use it if he did not back off. He remained at close distance, I pulled out my pepper spray and I sprayed him in the eyes. He seemed surprised, and backed off. He made a comment like ‘I can’t believe you just pepper sprayed me.’ He walked away from my car, the individual with me suggested that I leave for my safety, before I did so I threw a full water bottle towards him so that he could wash out his eyes with water.”

In his defense, Wheeler was being harassed and followed all the way to his car by some concern troll who had spotted Wheeler dining without wearing a mask.

Pepper spray was probably the nicest thing that could have happened.

That said: “According to Portland Police’s directive on use of force, this would have been cause for an officer to be punished.”