Insanity Wrap needs to know: Suppose they threw a Biden-Harris rally and nobody came?

Answer: You don’t have to suppose anything because it happened.

Suppose They Threw a Rally But Nobody Came?

Biden and Harris hold a campaign event in Arizona and the local news can’t believe that not one supporter showed up! pic.twitter.com/JKj0fPi6Jj

That’s exactly what did happen to Joe Biden and Kamala Harris, shown in a clip we will never get tired of watching.

If the polls are right, we’re losing to people who can’t get anyone to show up to see them.

Insanity Wrap can’t and won’t believe the polls are right.

First they came for the statues of slave owners, and I did not speak out — Because slavery is icky and wrong.

Then they came for the statues of Confederate generals, and I did not speak out — Because I do not live in the South.

Finally, they came for the statues of Lincoln, and…
…are you freaking kidding me? Lincoln? The Great Emancipator? Are these people nuts?

There’s a reason we usually stick to blogging and not poetry.

A final thought from the comments: “To be fair, the Democrats have never forgiven Abe for taking away their slaves.”

Social Distancing Is Vital in the Time of Coronavi… GO LAKERS!

Gather in huge masses to tear the streets up because your CCP bootlicking sportsball team won the championship?

Despite coronavirus restrictions and public health officials urging fans to celebrate from home, fans flooded the streets to celebrate the Lakers’ 106-93 win over the Miami Heat in Game 6 of the Finals.

Many who showed up were peaceful, but there were major intersections shut down due to crowds blocking off the area. Later in the night, LAPD went into tactical alert and declared the gathering an unlawful assembly.

Cars were seen performing “donuts” and “burnouts,” some cars were swarmed by fans in the streets. Multiple fireworks were set off and there were isolated reports of small groups throwing rocks and bottles at police.

It’s getting more and more difficult for Insanity Wrap to tell the difference between a BLM-antifa riot and a peaceful sports title celebration.

End the Lockdowns — for Science! 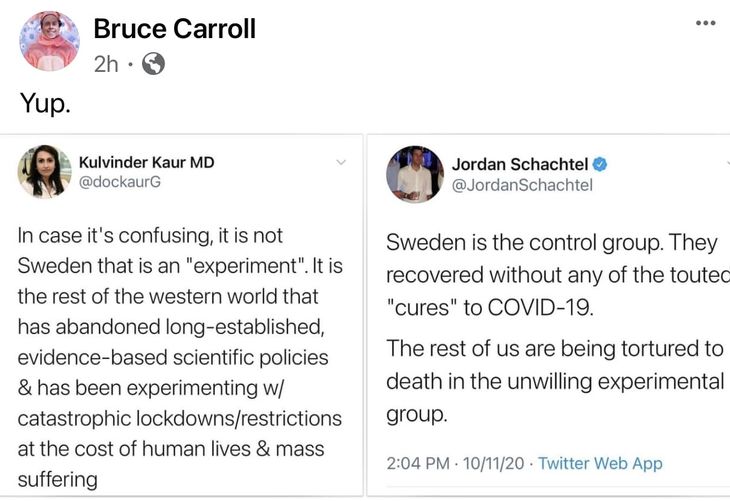 The lockdowns have been a colossal, expensive, and destructive mistake.

We can’t repeat this often enough:

This is simple, obvious stuff, given that the Wuhan Virus is a picky eater that greatly prefers to feast upon the old and the sick while leaving most everyone else be.

But the politicians have developed an insatiable appetite for arbitrary power, and we’ve let them gorge themselves.

Overthrow: “To bring about the downfall, destruction, or ending of, especially by force or concerted action.” -from The American Heritage® Dictionary of the English Language, 5th Edition.

Today: “Amy Coney Barrett’s willingness to overthrow past U.S. Supreme Court decisions will be under scrutiny at her Senate confirmation hearing this week, with implications for tough political issues many Americans regard as settled, including abortion and gay rights.” -Greg Stohr, Bloomberg Politics

But it’s harder to get people in a tizzy over “overturn” because courts do that all the time. “Overthrow” implies violence, as though Barrett is going to — oh, we don’t know — attack previous Supreme Court opinions with a pitchfork and musket.

Stohr’s other implication seems to be that just because “many Americans” — how many Americans? why do they get to choose for everyone? — regard certain issues as “settled,” that apparently the courts are never supposed to revisit them.

Apparently Stohl’s real problem with Barrett is that she’d put the Constitution first. He quotes disparagingly from a law review article she wrote in 2013 arguing that a Justice should “enforce her best understanding of the Constitution rather than a precedent she thinks clearly in conflict with it.”

Well, we certainly wouldn’t want to put the actual law of the land above some court’s opinion of it.

This Bloomberg opinion piece is scaremongering of the worst and most ignorant kind.

At least that’s what Insanity Wrap got out of Stohl’s mess of an article.

We were, however, greatly amused that Stohr’s “About” page lists him as “Reporter” rather than “Opinion Columnist.”

Absolute psychopath in a wedding dress brings a pastor and corners her boyfriend in Target, demanding he marry her or she'll leave him https://t.co/zs511IjI0R pic.twitter.com/fIpti124S8

Even though Insanity Wrap does sympathize with a woman who has been engaged for two years with no wedding date in sight, we also like to imagine the conversation outside went something like, “Aw, HELL no!”

People don’t quite know whether to root for the couple, condemn the toxicity, or lean into the idea that it’s staged. But the one positive in the whole thing is that at least everyone, including the bride, kept their mask on the whole time.

We’re quite certain the poor gentleman targeted for that shotgun wedding couldn’t have been happier about the masks.

In 30 years, feral pigs have expanded from 17 states to 39, reaching a population high enough to constitute a “feral swine bomb,” researchers say.

In August 2019, Willie McNabb and his yard full of feral hogs became an overnight internet sensation. But McNabb’s meme led to an increased awareness of the real fact of wild hogs, reported recently by The Atlantic, as something that millions of Americans deal with and that is a genuine public menace and destructive force.

Insanity Wrap has an elegant solution to the problem.

We’ll train the feral super pigs to eat murder hornets, and the resulting carnage will easily cut both populations in half.

You can thank us later, particularly when the videos hit YouTube.

I can’t make up my mind whether this is crazy or desperately sad.

This is a Prom dance in the age of the global COVID scam!

“What’s the matter with kids these days?” people often ask.

Insanity Wrap usually answers, “The people charged with their education.”

Insanity Wrap would like to know what business this is, so that we might patronize it immediately.

Even if it’s on the other side of the country and sells art supplies or scented candles or anything else we never buy ourselves.

Previously On Insanity Wrap: Choose the Form of Your Acne-Covered, Purple-Haired, Face-Pierced Destructor

Steve launched VodkaPundit on a well-planned whim in 2002, and has been with PJ Media since its launch in 2005. He served as one of the hosts of PJTV, a pioneer in internet broadcasting. He also cohosts "Right Angle" with Bill Whittle and Scott Ott at BillWhittle.com. He lives with his wife and sons in the wooded hills of Monument, Colorado, where he enjoys the occasional adult beverage.
Read more by Stephen Green
Tags: JOE BIDEN INSANITY WRAP AMY CONEY BARRETT