Insanity Wrap needs to know: Does Twitter attract angry, ignorant people or does it create them?

Democracy isn’t the objective; liberty, peace, and prospefity are. We want the human condition to flourish. Rank democracy can thwart that.

And so of course the Left went nuts.

Democracy is how you vote the bastards in or out.

Having a constitutional republic is supposed to keep the bastards from doing too much damage before you get the chance to vote them back out.

Mob rule is the enemy of the “liberty, peace, and prosperity” we mean to protect in a constitutional republic featuring occasional, regular elections.

In other words: Democracy in and of itself is not the objective; it’s a part of the process we use to protect our liberties that create the conditions necessary for prosperity.

But why think of all that when instead you can just take to Twitter and be crazy about what Senator Lee didn’t say?

The comments from the non-Blue Checkmark Mafia were even less well-informed and even more hateful.

You can take Insanity Wrap’s word for that, or you can click over and wallow in the muck for yourself.

We highly recommend the former over the latter.

Leaving aside the dictionary definitions of “republic” and “democracy” which must seem arcane and esoteric — if not downright foreign — to the maleducated crybullies who dominate social media, which part of “And to the Republic for which it stands” is news to these people?

If, after this, Biden-Harris win the suburbs and the White House, Insanity Wrap is sorry to have to inform you that suburban voters are going to get what they voted for, good and hard.

But you knew that already, didn’t you?

Any Excuse Will Do

Democrats held several massive funerals for John Lewis, including one in Georgia. No "journalist" gave a damn. https://t.co/Kyk4o1Bi7c

And for the same completely scientific reason, Joe Biden can’t appear 12 feet away from Donald Trump with not one but two Plexiglass partitions between them.

Funerals repel cooties, according to the very latest in fashionably scientific faith*.

Answers to Questions No One Is Asking

Can Biden Save the World?

Kemal Dervis is asking that.

With a straight face, one presumes.

Biden can’t make it past breakfast half the time, but he’s going to save the world.

An administration led by the Democratic challenger could pursue a concerted US effort to renew multilateralism and reverse the trend toward a starkly divided world of great-power rivalry. At a time of unprecedented global challenges, such an outcome would benefit all, including China.

Insanity Wrap harbors not the slightest doubt that a Biden administration would benefit China.

This country, the Middle East, India, Japan, maybe even Europe… not so much.

You guys, Jake Tapper is super concerned that the Governor of Minnesota might not be aware that President Trump has the Coronavirus 😂😂😂😂 https://t.co/LTckcMmgJQ

Jake Tapper is, Insanity Wrap regrets to inform you, the world’s cheapest and most obvious concern troll.

Years ago — so long ago that Tapper was still a darling among many conservatives — Insanity Wrap called him out for such cheap concern trolling that we were forever relieved of any delusions we might have once held about his basic fairness.

The story concerned an incident ten years ago in which Israeli commandos boarded a Turkish ship trying to break Israel’s security blockade of the Gaza Strip.

The “peace activists” attacked the Israeli commandos and, as a result, nine people were killed in the raid, including one Turk who held dual American citizenship.

They hadn’t been to the U.S. since he was two years old, but whatever.

Tapper interviewed (if we recall correctly) the Israeli ambassador while guest-hosting on ABC’s This Week. With all the faux outrage he could muster, Tapper practically assailed the ambassador because apparently the commandos were supposed to check everyone’s passports before returning fire, just in case one of them happened to have dual U.S. citizenship.

And that’s when Insanity Wrap was done with Tapper. 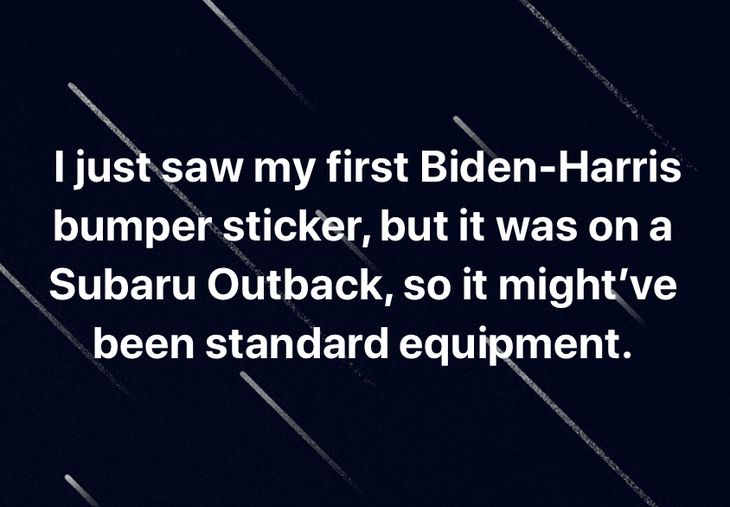 True story. This happened to Insanity Wrap in our son’s carpool dropoff lane this very morning.

So of course we posted it to Facebook almost immediately.

And if you’re thinking that this morning’s sunlit carpool dropoff required extra-dark sunglasses following last night’s debate drunkblog, then you know us well.

Previously On Insanity Wrap: So Much Crazy We Don’t Even Know How to Headline It