Insanity Wrap #65: So Much Crazy We Don't Even Know How to Headline It

Insanity Wrap needs to know: What happens to men who lock their stuff in a “chastity cage” with an internet-accessible lock?

Answer: Pretty much exactly what they deserved in this age of the Internet of Thingies.

Insanity Wrap thinks of it as a Chinese finger trap on steroids.

And with an IP address.

We’d prefer not to think of it at all.

Is this the biggest self-own in world history?

A security flaw in a hi-tech chastity belt for men made it possible for hackers to remotely lock all the devices in use simultaneously.

The internet-linked sheath has no manual override, so owners might have been faced with the prospect of having to use a grinder or bolt cutter to free themselves from its metal clamp.

Insanity Wrap winces at the thought.

Pen Test Partners (PTP) – the Buckingham-based cyber-security firm involved – has a reputation for bringing quirky discoveries to light, including problems with other sex toys in the past.

It says the latest discovery indicates that the makers of “smart” adult-themed products still have lessons to learn.

The BBC story reports — thank goodness — that the Chinese developer of the Cellmate Male Chastity Cage has issued a security patch and published a workaround (the Beeb’s word) for men who might still be, ah, encumbered.

Insanity Wrap tries not to judge, we really do.

So if for whatever reason you feel the need or desire to have your Johnson locked up in a plastic and steel harness, then by all means do so.

But if you insist on buying a model with an electronic key that’s accessible on the internet, then you absolutely deserve what’s coming to you.

Or what’s not coming to you, as the case may be.

The Obama-Biden administration laughed it up with Raul Castro at a baseball game and offered flexibility to Putin while handing him control of Syria. Spare me. https://t.co/cnco4DFgcP

Insanity Wrap would urge you to vote on November 3 as though the alleged Democratic presidential nominee were overly friendly with Russian autocrats, Cuban Communists, and Beijing Inc.

The Only Thing You Need to Watch Today

If you haven’t read about The Great Barrington Declaration, you really ought to.

On October 3, 2020, in the living room of the Stone House of the American Institute for Economic Research, top epidemiologists, economists, and journalists gathered to discuss the global emergency created by the unprecedented use of state compulsion in the management of the Covid-19 pandemic. The result is The Great Barrington Declaration, which urges a “Focused Protection” strategy.

This film provides an inside look at the two hours of questions and answers in a private forum that takes place the morning prior to the drafting of the document.

During the greatest public policy crisis of our lifetimes, this film chronicles what appears to be a turning point, the moment when the moral courage of a few people broke through the pro-lockdown opinion consensus. With patience and careful explanation, the panel reveals the lockdown agenda as cruel pseudoscience that has had a devastating economic, medical, social, and cultural impact on everyone but especially the poor and struggling. This film will help everyone rethink what has happened to the world over the last 7 months.

Should you choose to you can sign the Declaration here.

“How much bullshit do you need in your life?”

Very little, which is why Insanity Wrap rarely watches CNN and never watches anything with either Cuomo in it.

Previously On Insanity Wrap: Obsessed Left Wants Everyone Who Isn’t Them to Just Die Already

Live-streamer covering the #antifa protest in Portland was punched and knocked to the ground. A masked rioter wanted to stop him from filming in public.

Many journalists have been beaten by antifa since riots began. #PortlandRiots #antifa pic.twitter.com/tzDgPsZD7x

Andy Ngo is among them.

We also enjoyed the tweep who replied, “He was punched by a mostly peaceful idea.”

…request, and looking to the future of our Country. I have instructed my representatives to stop negotiating until after the election when, immediately after I win, we will pass a major Stimulus Bill that focuses on hardworking Americans and Small Business. I have asked…

Insanity Wrap hates to say this, but today’s Craziest Person in the World is President Donald Trump.

Politically, a bad stimulus bill is almost certainly better than no stimulus bill, and if it’s loaded with pork for Blue States… well, that’s the price of losing the House.

Trump’s move might prove to be the biggest self-own of his administration. In fact, the only way we could even imagine this to be a bigger self-own is if somehow a Cellmate Chastity Cage were involved.

We would love to be wrong about this one, and given the crazy nature of 2020, maybe we are.

Then again, Insanity Wrap is pleased to report that Trump is crazy enough (in the good way) in this crazy year (the bad way) to make a play for…

And “No redactions!” might have the ability to dominate the headlines like no other story, not even the failed stimulus.

Maybe it’s the Democrats who are over a barrel and it does all work out in the end.

So is our Craziest Man in the World really crazy like a fox?

We had meant to run this yesterday when it was still hot and fresh, but dueling family emergencies prevented Insanity Wrap from running yesterday.

Please forgive the delay, and enjoy the liberal tears.

And reopen the damn economy already.

PJ’s own Megan Fox has the full story for you, but we’d be remiss if we didn’t give you a heads-up that one of disgraced former Congresscritter Katie Hill’s staffers hijacked her Twitter account.

And then proceeded to tell the truth, the whole truth, and nothing but the truth.

It’s a fascinating and disturbing read.

And Insanity Wrap would point out that Hill, for all the sexual abuse (if that’s the correct phrase) she dealt out to her own subordinates in her House office, never faced any official sanction from the Democrat-run House.

That’s the most disturbing part of all. 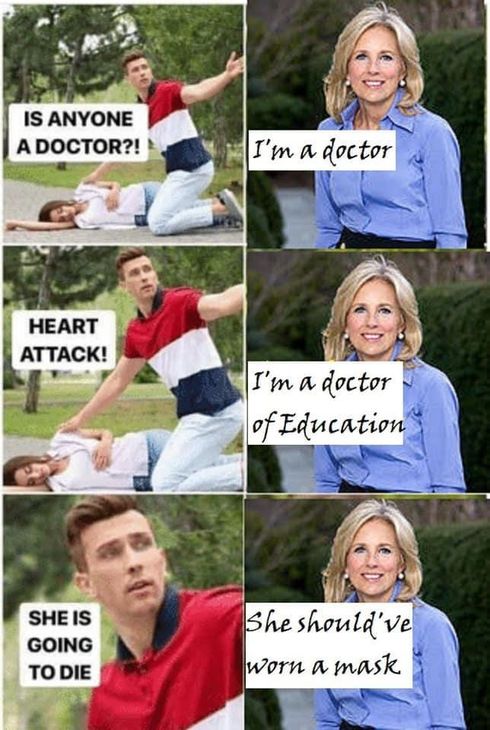 It’s OK to laugh, we promise.