Insanity Wrap #63: Obsessed Left Wants Everyone Who Isn't Them to Just Die Already

Answer: Yeah, us neither. We would like to take a moment to wish Donald and Melania Trump and Hope Hicks swift recoveries.

The Worst People in the World (All Have Blue Checkmarks)

Insanity Wrap has no idea who “Zwetchkenstiel” really is, and he has fewer than 1,000 Twitter followers as of the time we’re writing this. 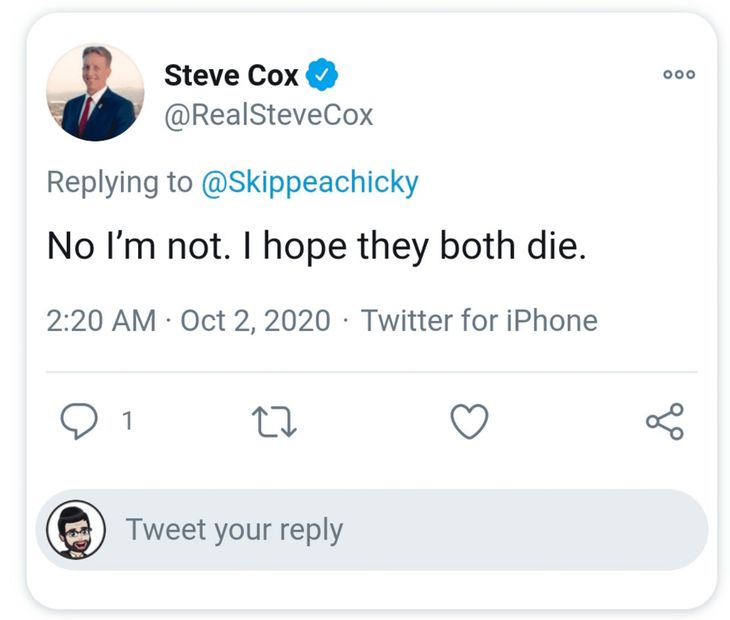 So much more at the thread Zwetchkenstiel put together, that if you’re in the mood to spoil your lunch, then you should certainly click on over.

Insanity Wrap would take a moment to remind you that this recent outbreak of “I wish someone I disagree with would DIE!” is just the latest in a yearslong pandemic of progressive death wishes.

If they’ll publicly call for the death of a president, imagine what they must privately think of you.

The Craziest Sanest Person in the World (Today)

Progressive Activist Brags About Pushing Biden to the Left: ‘Even If He Doesn’t Want to Say It’

Sure, Progressive goals are crazy, if you’re into things like liberty and prosperity and equality before the law and all that other outdated stuff those bad white guys wrote down in Philadelphia almost 250 years ago.

But the Left is coldly sane when it comes to pursuing those goals, and Insanity Wrap regrets to inform you that in Joe Biden they’ve found their perfect, “moderate” frontman to take the reins of power for them.

They know it, and they’re feeling confident enough to go public with it.

Vote — and get others out to vote — accordingly.

SHOCKING: California is proposing to ban all gas powered vehicles but cannot currently produce enough electricity to charge the electric vehicles that are already on the road

So they are suggesting restrictions on times when you can charge your electric car pic.twitter.com/d0DMmFR4VF

California is a Third World state with a First World tech industry keeping the lights on, albeit barely.

What happens as more and more tech people telecommute from Nevada and Arizona, instead of living and paying taxes in the Bay Area?

If Insanity Wrap had to guess, Sacramento will double down on every single one of their destructive — er, “progressive” — policies.

Previously On Insanity Wrap: Save Us from Another Terrible Debate, Joe Rogan

2/2: Well over 99% of healthy individuals in the President’s age group recover completely and most never even become symptomatic. I fully expect this to be the case with President Trump as well.

Insanity Wrap would remind you that the Wuhan Virus is an exceptionally successful virus.

Ebola is a far nastier virus, and Insanity Wrap wouldn’t wish it on anyone. Bleeding out the eyes, pores, etc., until dead is no way to go.

But Ebola is not a very successful virus.

With a mortality rate between 50% and 90%, it kills so many of its victims so quickly that Ebola breakouts burn out before they can go truly global the way the Wuhan virus has.

Wuhan is far more successful in that it is both highly contagious but only rarely fatal.

Unlike Ebola, even with a vaccine, the Wuhan virus is here to stay.

So with just a tiny bit of luck, the Trumps and Hope Hicks are here to stay, too.

Did they ever believe the whole “Love Trumps Hate” thing?

Don’t be silly, of course they didn’t.

What in the Alabama cousin fuck is going on right here? pic.twitter.com/VdymcCdhR8

Alabama? There isn’t a whole lot of antifa in Alabama. Those boys look pure Portland to our eyes.

If we lose to these people, it’s our own damn fault.

Insanity Wrap would like to come to Biden’s defense by reminding you that this time his numbers were off by less than three orders of magnitude (even if only barely). On the Biden Curve, being off by only 873 to 1 instead of 1,000 to 1 is pretty good.

The Numbers, They Are All Wrong

The Milwaukee coroner says about 20 percent of #COVID deaths in his county are misclassified and not due to the virus (not sure if this includes death certificate matching, which typically happens at the state level). 20 percent is likely the minimum.https://t.co/HEXHPg9FOB

So how many people have died of a COVID-19 infection, really?

But honestly, the answer is, “Far less than we’re told.”

Previously On Insanity Wrap: Is That a Pipe Bomb in Your Pocket Or Are You Just Happy to Arrest Me?

Steve launched VodkaPundit on a well-planned whim in 2002, and has been with PJ Media since its launch in 2005. He served as one of the hosts of PJTV, a pioneer in internet broadcasting. He also cohosts "Right Angle" with Bill Whittle and Scott Ott at BillWhittle.com. He lives with his wife and sons in the wooded hills of Monument, Colorado, where he enjoys the occasional adult beverage.
Read more by Stephen Green
Tags: DONALD TRUMP JOE BIDEN INSANITY WRAP