Insanity Wrap needs to know: When is a violent anarchist actually a conservative Republican?

Answer: When the Party requires him to be, Comrade.

Even the Wildlife Has Had It with CNN

Insanity Wrap can now reveal to you that among President Donald Trump’s superpowers is the ability to communicate with, and temporarily control, small woodland creatures.

Maoing It Up in Seattle

“A photo of the leading candidate for mayor of Portland, Ore., has resurfaced showing her wearing a skirt patterned with the faces of famous Communist dictators.” https://t.co/xkm6VSYTfX

Far-Left progressive Ted Wheeler, the incumbent, apparently isn’t far-left enough, considering that he has yet to actually join antifa, seize the means of production, or open so much as a single reeducation camp.

It is with glee in our black little heart that Insanity Wrap waits for Portlanders to get what they’ll vote for, good and hard.

And breaking the windows of apartment buildings

If Joe Biden wins the suburbs, he wins the White House.

This leaves Insanity Wrap with one burning question: Why are the Left’s mostly violent rioters suddenly attacking the ‘burbs?

It could be that they feel invulnerable going into Election Day.

It could be that they’re desperate enough to try to intimidate people into not voting.

It could be that they’re just anarcho-communists with no plan beyond “hurt people and break things.”

What Insanity Wrap does know is that one way or another, these riots have got to stop.

One way is for law enforcement to get serious.

The other way is for vigilante groups to form, groups more violent than the rioters.

Insanity Wrap greatly prefers the former to the latter, but the latter will become inevitable if the former doesn’t come along quickly.

This is not an endorsement of vigilante groups. It’s a sorrowful prediction.

Who needs to teach proper grammar when you can teach trendy buzz-language that will be obsolesced next year by something even buzzier and more inclusive?

The Mount Holyoke College Office of Diversity, Equity, and Inclusion shared a post on its Instagram story stating that the pronouns “they” and “them” are grammatically correct when used in the singular form.

The post from the school that calls itself “a women’s college that is gender diverse,” also claims that even if they/them isn’t grammatically correct, it’s better to support “gender diverse folx” than to use correct grammar.

“is grammar honestly more important to you than supporting gender diverse folx?”

“They/them is a [grammatically] correct singular pronoun,” the post stated. “Even if it wasn’t though, is grammar honestly more important to you than supporting gender diverse folx?”

The post, shared by the Office of Diversity, Equity, and Inclusion’s Instagram account, links back to its original source, an account called “thequeeradvocate.” According to the account’s biography, it is run by Stevie Lane, who is “queer, trans & NB [nonbinary]” as well as an “LGBTIQA+ advocate.”

However, Insanity Wrap feels certain that cost could be brought down by eliminating the school’s educationally-useless Office of Diversity, Equity, and Inclusion, along with a few others like it.

Previously On Insanity Wrap: So Much Crazy We Don’t Even Know How to Headline It

Everything and We Do Mean Everything Is Political

On the left is the 2016 NYC election map. On the right are the zones that Mayor DeBlasio and Gov Cuomo are forcing into a second total lockdown. pic.twitter.com/kE9sYfJbWj

Nothing to see here. Move along.

This Will End Well 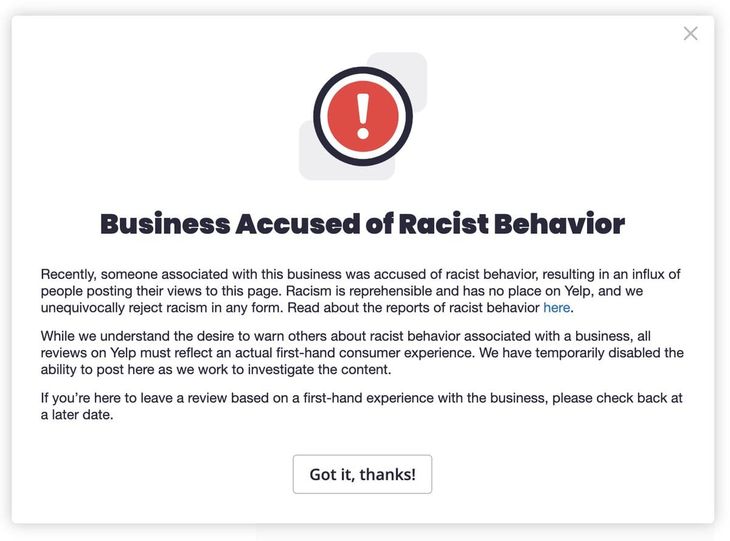 Coming soon to a locally-owned restaurant near you: Discounted or even free meals to groups with enough members to stick innocent businesses with the “RAYCISS!” tag.

What Yelp’s policy amounts to is shakedowns of small businesses enabled by a major corporation.

Because fairness or whatever.

Freedom is never more than one generation away from extinction.

There was a time when Western Civilization was so confident in its basic goodness and its remarkable achievements — and for very good reason — that other civilizations aspired to be more like the West.

The West willingly shed its confidence and Iranian women were forced to don the burka. 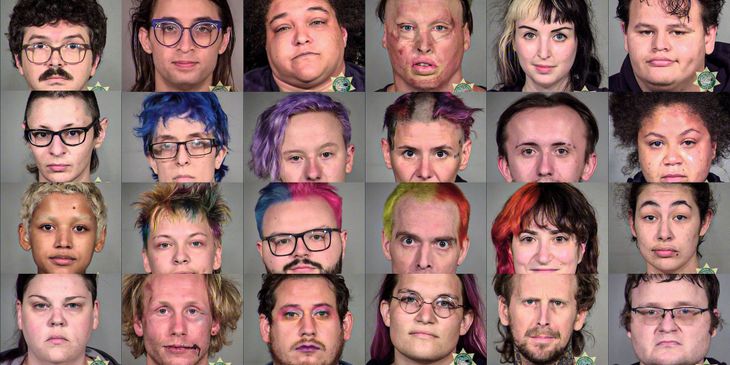 “‘Make yourself as ugly on the outside as you are on the inside,’ they told me. ‘People will like you better that way,’ they said.”

Caleb Hull got down into the Portland muck to collect the very latest in antifa mugshots for you.

Insanity Wrap will say it once again: If we lose to these people we’ll have no one to blame but ourselves.

He calls Trump a ”tyrant” & an enemy but Gretchen Whitmer is pretending these anarchists are “Trump supporters”. Thread. https://t.co/oXwYXhLni0

Brandon Caserta doesn’t exactly look like someone you’d run into at your next Kiwanis meeting or local VFW chapter.

But the Left will try to sell him as a conservative or even a Republican because… well, what else do they have at this point other than flop-sweat-stained desperation?

Other than the odious and self-serving lies about Caserta, one small detail in his video did grab our attention.

What is that altered American flag supposed to represent?

The stars have been replaced by something shaped vaguely like a capital “P,” and there are three large dots arranged almost like a stack of old-fashioned cannonballs.

Insanity Wrap has never seen such a thing before, and any help would be greatly welcomed.

What’s that, you can’t because you know it’s true.