Hit Me with Your Best Shot: What Does 2020 Have in Store for Us Next?

The Year of Our Lord Two Thousand Twenty will be remembered for just one thing.

And that one thing is all of this stuff:

Did I miss anything?

The point is, 2020 couldn’t possibly get any worse.

It’s the question we’ve been asking ourselves and one another for weeks or months now.

By the time murder hornets became a thing way back in May, it was either laugh, cry, or give up — and it seems most people chose to laugh.

As we enter autumn, there’s not only a chill in the morning air but hope on the horizon.

If she hasn’t done her worst to us yet, what’s to come?

I reached out to the Facebook hivemind to find out. 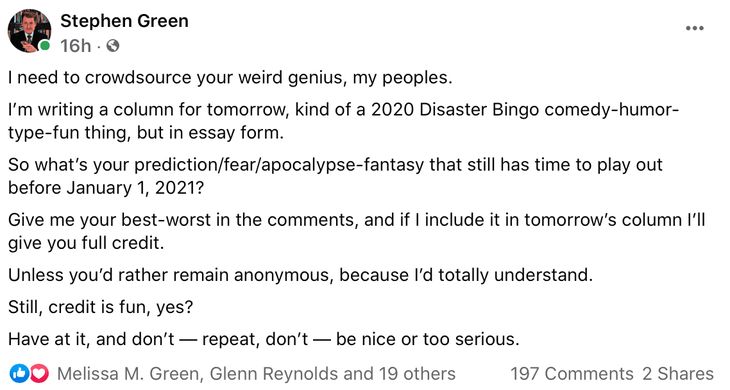 So without further ado, here are the various ways 2020 to get even worse, helpfully arranged by theme.

COVID Was Just the Begining

That one hits a little too close to reality, doesn’t it?

Mike MacLeod has a doom scenario for NYC in which “De Blasio falls into Hudson river, becoming a kaiju. Destroys New York city.”

But, really, wouldn’t that just speed up the process De Blasio started six years ago?

A cloned social justice army of Alexandria Ocasio-Cortez is incubated in those abandoned Wal-Mart stores we heard about taken over by the government. One million AOC clones and two million of her googly eyes will be released in red states to loot and burn in 2038. This is the year of their spawning.

Leah Sargent says she’s concerned about “Polar bears on meth. It could happen this year is all I’m saying.”

This one from Casey Moops is so close to actual Democratic politics that it barely qualifies as fiction:

Horde of orcs invades through a supernatural portal. Dems adopt them as their new favorite victim group and lobby for “mostly peaceful” orcs rights and demand orcs should be able to vote. Trump starts polling really well with orcs, so Dems reverse their position.

Portland has already been invaded and occupied by an army of crybully soybois, so why not?

Forget the murder hornets that turned into a big dud. Anna Chosik suggests, “Birds begin attacking people à la Hitchcock.” She also said that it “more credible than a plague of flying monkeys,” but in 2020 no one really knows what’s credible anymore.

Steven Eimer believes that there’s a chance this could happen: “Biden completes a complete, coherent sentence. And it adds value to the conversation.” 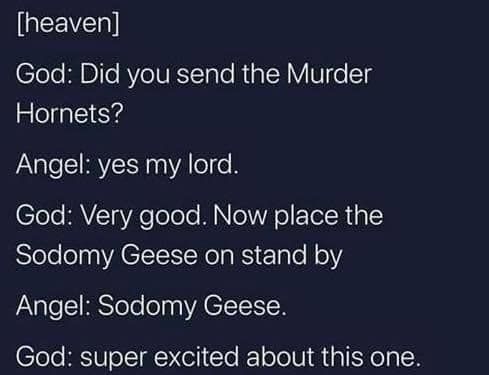 How many ways can one election go wrong? Let us count them.

First Amendment expert and enthusiast (and Instapundit co-blogger) Charles Glasser made me lose sleep with this one:

Biden is elected, has an aneurysm before swearing in, and Kamala declares “national emergency” supported by lemmings at NYT, and other MSM who lead the other lemmings into complacency when the “national emergency” requires centralized economy and a complete shutdown of private enterprise. The Road to Serfdom.

That’s not The Road to Serfdom, my friend. That’s The Highway Overpass Abutment of Serfdom, driven into at 85 miles an hour.

What if — and stick with me here — Joe Biden actually dies on Election Day but he does so in a place where the police kind of believe the kookiest conspiracy theories (or just hate Killer Kamala) and they investigate his death as a homicide?

If you dig deep enough into the internet, you will find people who believe this has already happened.

At this point, would you argue with them?

I’d like to skip straight to the meteor, please.

Tom McCammon wonders what would happen if the “Dems replace Slow Biden with Kanye and he wins.” Naturally, “the Kardashians come out of ‘retirement’ to do a special 4-season series ‘The Wests go East.'”

Once again, some of these hit too close to the strange reality that is 2020.

The Grand Unified Theory of 2020 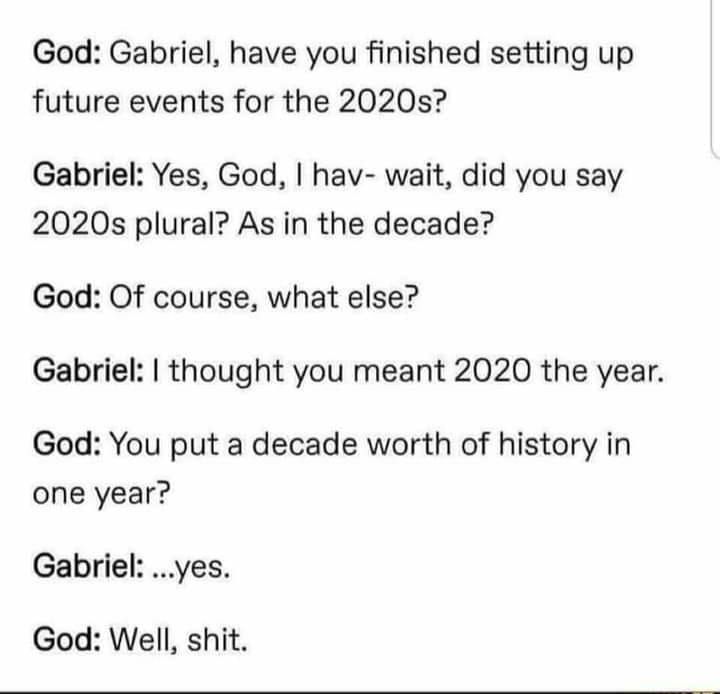 In any case, after everything we’ve been through this year, not even God Himself could make 2020 any worse, right?

All I can say for sure is, our annual New Year’s Eve bash is going to feature the most heartfelt countdown anyone has ever heard.