Insanity Wrap #51: Suppose They Made Peace But Democrats Wouldn't Come?

Insanity Wrap needs to know: Remember when Democrats were for peace the Middle East?

Now That’s How You End a Riot

As Insanity Wrap readers learned yesterday, Pennsylvania isn’t messing around with any of this “mostly peaceful protest” stuff:

And now this, courtesy of the New York Post:

A Pennsylvania judge threw the book at several protesters accused of rioting — by setting their bail at $1 million each — in the wake of the police shooting of a knife-wielding Lancaster man.

Insanity Wrap hopes they get a fair trial and long sentences served up by juries of their peace- and liberty-loving peers.

Do you hear that? It’s the sound of silence, and it’s emanating from Portland.

Almost as suddenly as the mostly violent riots began in Portland, they seem to have ended.

On September 7th to the morning of the 8th, the Pacific Northwest experienced a major “wind event.” Winds gusted through Oregon and Washington at more than 60 miles per hour. Fires that had been allowed to crackle along, such as the Beachie fire, flared up. Power lines were downed. The fires kicked up.

And then came the reports. Clackamas County Sheriff’s officials reported that people had seen antifa protester types reportedly stashing gas cans, looting, and looking ridiculously out of place. They were taking pictures and giving locals grief for trying to keep them out of closed neighborhoods. Locals wondered if there was a connection between the fires and the sightings of these folks.

Insanity Wrap would also like to remind you that committing arson has nothing to do with George Floyd or any particular lives mattering.

It’s the act of people who just want to see our country burn.

And When the Authorities Don’t Act, Americans Do 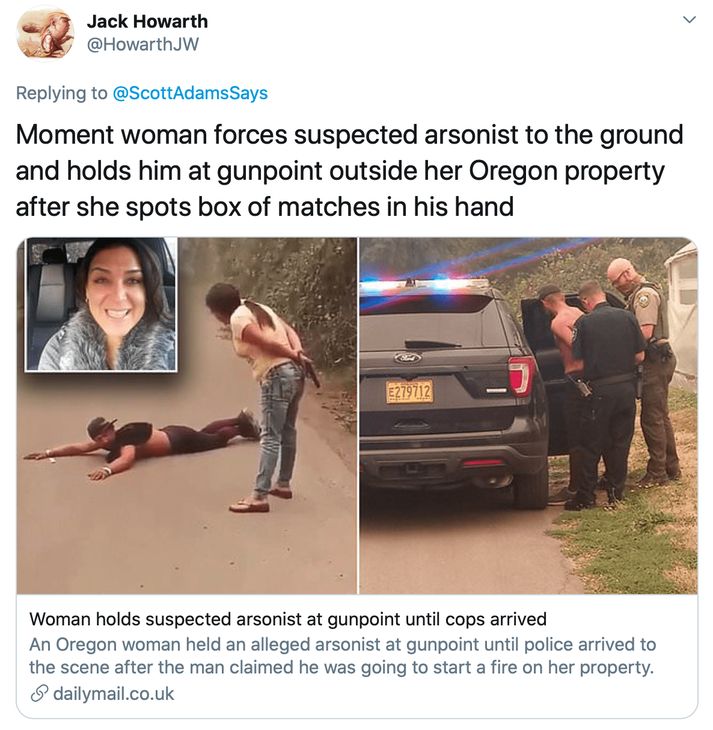 “If I need to do this again to protect my family and my neighbors, I will in a heartbeat do it again, except this time I will not be as nice as I was.”

Here’s the Daily Mail writeup of what happened:

In the footage shared on Kat Cast’s Facebook page, Cast is seen driving up to the man as someone in her vehicle films the incident.

Cast gets out the vehicle holding a handgun, walks over to the man, who has not been identified, and orders him to get on the ground.

‘What are you doing on my property?’ Cast asks. ‘Did you light anything on fire?’

The man then responds that he was ‘just passing through’.

According to Cast, the man had threatened to start a fire on her property, prompting her to make sure he was arrested.

Insanity Wrap was unable to locate Cast’s Facebook page in time for publication, and we wouldn’t be at all surprised if she’s locked it down in case antifa thugs track her down for some mostly peaceful vengeance.

Whatever the case, Insanity Wrap is proud to live in a country with fellow and sister citizens like Kim Cast.

Given the chance to ask Biden a question, a reporter claims Trump is running a “disinformation campaign” to Latino voters and asks Biden how to stop it.

Biden’s socialist agenda is not “disinformation” & this is not a serious question.pic.twitter.com/elZUtZfHUP

It isn’t that Insanity Wrap necessarily wants the infotainment industry — formerly the Democrat-Media Complex, formerly the Mainstream Media, and before that the news biz — to be nicer to Republicans.

We’d just like the Democrats to receive equal treatment, is all.

Kerry, Abbas warn of an ‘explosion’ of violence with Jerusalem embassy move

Join us now as Insanity Wrap sets the Wayback Machine to January, 2017:

In an interview with CBS, Kerry – preparing to leave the State Department after engaging in the Israeli-Palestinian conflict intensely for four years – said the violent movement would extend beyond the West Bank.

“You’d have an explosion, an absolute explosion in the region, not just in the West Bank and perhaps even in Israel itself, but throughout the region,” Kerry warned.

What’s that, you say? Trump moved our embassy to Jerusalem and peace is breaking out between the Arabs and Israelis?

They’re doing trade deals and cooperating against Iran instead of blowing stuff up?

Insanity Wrap is so shocked that Barack Obama’s former Secretary of Screwing Up State Affairs, John Kerry, could get things so wrong that you could knock us over with a wrecking ball.

Exit Question: Would it be unfair if Insanity Wrap were to remind you that Kerry brokered Obama’s Iran Deal?

You remember the one: It enriched Iran so much that they were able to add years and countless deaths to Syria’s civil war, all while spreading terror elsewhere, and doing little to stop their nuclear weapons program.

Because, heavens, we wouldn’t want to be unfair to the man who purposely screwed that particular pooch.

Introducing the Dumbest Person in the World (Today)

What am I missing? Was there conflict between Israel, the UAE, and Bahrain?

So perhaps we ought to forgive Ms. Schechner for her sand-pounding ignorance.

Insanity Wrap shouldn’t have to remind anyone of this, but Israel and most of the Arab world have been in a technical state of war since 1947. That is when they weren’t fighting actual wars in 1948, 1956, 1967, 1973, plus various Palestinian terror campaigns and such.

Egypt made a cold peace with Israel in the late ’70s, and Jordan followed suit years later — always with the accent on “cold.”

But now peace is breaking out all over, and it’s all thanks to Trump’s Middle East Peace deal-making.

Travel and commerce are opening up between nations, peoples, historical rivals, ancient enemies.

Schechner does nothing but reveal her ignorance — or is it bitterness? — with tweets like the one above.

Remember when peace in the Middle East was a bipartisan goal?

It seems such a long time ago, doesn’t it?

Steve launched VodkaPundit on a well-planned whim in 2002, and has been with PJ Media since its launch in 2005. He served as one of the hosts of PJTV, a pioneer in internet broadcasting. He also cohosts "Right Angle" with Bill Whittle and Scott Ott at BillWhittle.com. He lives with his wife and sons in the wooded hills of Monument, Colorado, where he enjoys the occasional adult beverage.
Read more by Stephen Green
Tags: MIDDLE EAST RIOTERS INSANITY WRAP