Insanity Wrap needs to know: When is it smart to jump on a moving police cruiser?

Answer: Never. It is never smart to jump on a moving police cruiser unless you’re trying out for Stupid Antifa Tricks.

Frequent Insanity Wrap readers know that Portland could have ended the riots at any time over the last three-plus months, had they wanted to.

All it takes is targeted arrests of the ringleaders, followed by serious charges, serious bail, and eventually serious trials resulting in serious sentences.

Instead, Portland has indulged communist antifa thugs in a semiofficial catch-and-release program.

You know, setting loose these guys again and again:

The result has been lives lost, untold millions in property damage and city expenses, and the demoralization of the police.

All of this is precisely because Portland’s leadership wanted it that way, as Insanity Wrap has told you more than once.

If this had happened, Insanity Wrap would be in favor of sanctioning Vlad Putin and his entire murderous clique until their eyes pop.

Two months after top Pentagon officials vowed to get to the bottom of whether the Russian government bribed the Taliban to kill American service members, the commander of troops in the region says a detailed review of all available intelligence has not been able to corroborate the existence of such a program.

“It just has not been proved to a level of certainty that satisfies me,” Gen. Frank McKenzie, commander of the U.S. Central Command, told NBC News. McKenzie oversees U.S. troops in Afghanistan. The U.S. continues to hunt for new information on the matter, he said.

McKenzie’s comments, reflecting a consensus view among military leaders, underscores the lack of certainty around a narrative that has been accepted as fact by Democrats and other Trump critics, including presidential nominee Joe Biden, who has cited Russian bounties in attacks on President Donald Trump.

As Mark Levin noted on Twitter this morning, “Pentagon found no evidence to support New York Times Russian bounty story. Yet, that story was used to trash the president for weeks.”

It might be worse than that. It might be — it probably will be — that Biden will continue to trash the president, and that the press won’t call him on it.

Previously On Insanity Wrap: Where Were You on 9/11, Where Are We Now?

Ladies and Gentlemen, Your Moral and Intellectual Superiors at Work

After 3 years of swallowing the outrages, scandals, and crimes of Donald Trump, many conservatives are sore and swollen from the accumulation of blocked moral indignation. That vast dropsy had to be discharged upon something – and apparently Netflix's "Cuties" is to be it it.

Alleged human being David Frum felt it necessary to use such turgid language in defense of a movie — Cuties on Netflix — that borders on child pornography.

The replies to Frum on Twitter are — if Insanity Wrap may borrow a phrase from the esteemed Ferris Bueller — so choice.

Insanity Wrap hopes we can all agree that David Frum should not write, speak, or otherwise use words.

No, not even in his own head.

And for what it’s worth, we’ll have an article tentatively headlined “True Confession: I Watched ‘Cuties’ on Netflix (Almost)” for our VIP readers later today or on Wednesday.

And Now for Some Good News About the Planet Earth

The World Is Doing Better Than Ever. Here’s Why You Never Hear About It.

Great work here from our friends at Reason.

And now it’s time for an Insanity Wrap Mini Rant.

Do you know what annoys us more than almost anything other than Star Wars sequels and slow drivers in the left lane?

The planet has been deglaciating for the last 12,000 years or so, and that’s a good thing. Advancing glaciers mean the planet is entering one of its frequent ice ages.

You do not want to live in an Ice Age when arable land is frozen over, growing seasons are shortened, entire habitats disappear, and species after species is driven into extinction.

Insanity Wrap would be surprised if, at maximum glacier coverage, we could grow enough food to feed half a billion people. Starvation and mass death would come slowly, but inevitably they would come.

Retreating glaciers mean the Earth is in a warmer period with a wider and more diverse biosphere, more arable land, longer growing seasons, and a greener and more lush planet.

Worst comes to worst, we can build retaining walls to protect our cities from rising seas, but with current technology the only way to deal with an Ice Age is to suffer through it.

Of course Vitamin D costs about 0.00001% as much as other interventions, so it wouldn't help the #Coveconomy.

We’ve been taking Vitamin D for years, and on Glenn Reynolds’ advice, we take it twice daily during the Standard Time months when there are fewer daylight hours and fewer reasons to go outside.

So we’re willing to concede that we might be pill-happy.

Still, the evidence is good on Vitamins C & D in Wuhan Virus prevention, so at least take those two.

Confirming what anyone with two brain cells to knock together already knew:

“The individuals are violently attacking the Federal facilities based on these ideologies,” he said in regards to Antifa, which he classed as VAAI or “VIOLENT ANTIFA ANARCHISTS INSPIRED.”

“We can’t say any longer that this violent situation is opportunistic,” wrote Murphy. “Additionally, we have overwhelmingly intelligence regarding the ideologies driving individuals towards violence and why the violence has continued.”

“A core set of Threat actors are organized, show up night after night, share common TTPs and drawing on like minded individuals to their cause.”

Insanity Wrap urges you to click over and read the whole thing.

so this synced perfectly didn't even have to edit pic.twitter.com/TREO1qFjgQ

For the record, Insanity Wrap believes this is also the best instance of mostly peaceful protest you’ll see all day. 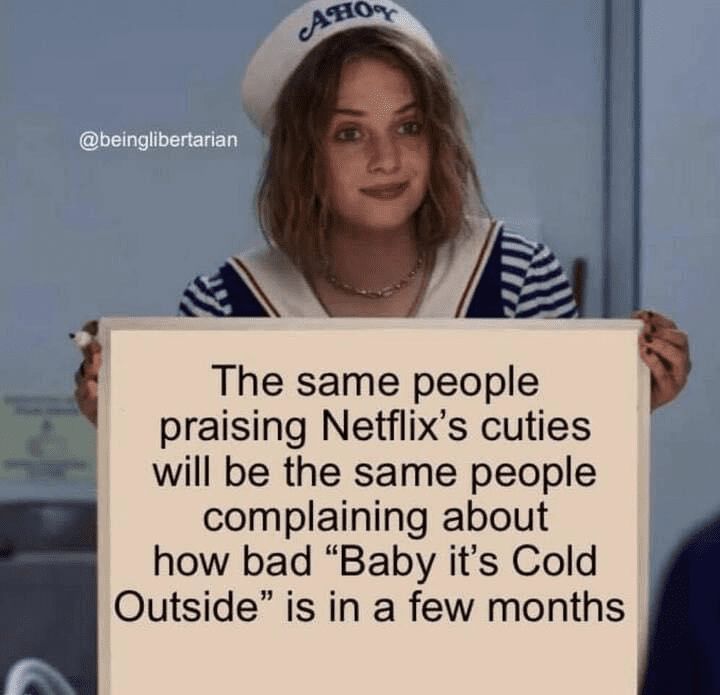 Just to be perfectly clear, Cuties is revolting but “Baby, It’s Cold Outside” is most emphatically not about date rape.

Steve launched VodkaPundit on a well-planned whim in 2002, and has been with PJ Media since its launch in 2005. He served as one of the hosts of PJTV, a pioneer in internet broadcasting. He also cohosts "Right Angle" with Bill Whittle and Scott Ott at BillWhittle.com. He lives with his wife and sons in the wooded hills of Monument, Colorado, where he enjoys the occasional adult beverage.
Read more by Stephen Green
Tags: RIOTS INSANITY WRAP