Insanity Wrap needs to know: When is it OK to hector a black person about race?

These two videos contain what might be our favorite moments of white privilege ever recorded, as an angry-sounding white woman calmly shrieks at a black female cop about the true nature of race.

In the second video, our clueless white harridan really reveals her stupid, going all-in on the 4chan hoax that the OK sign is a white power symbol.

Our streets are being taken over by people whose thuggish ignorance is all the proof they need of their moral superiority.

Of course, that’s not exactly how the media are portraying things… 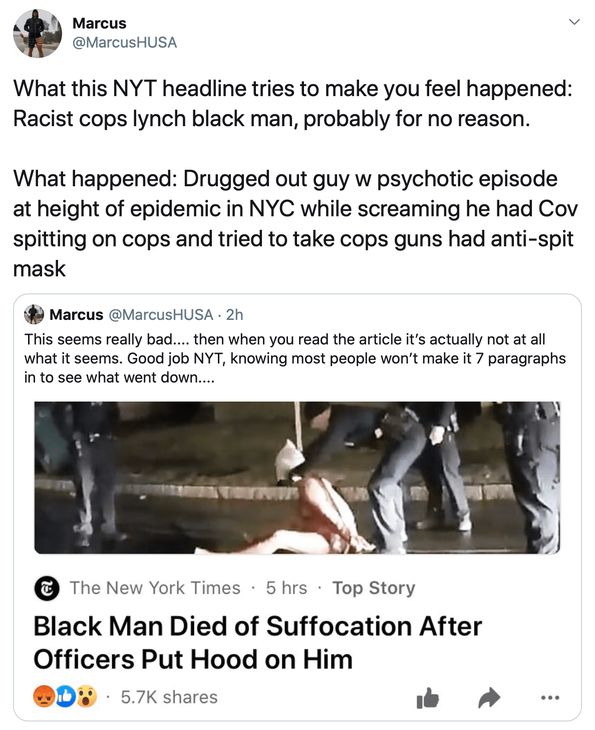 Psychotic, drugged out, and sick is no way to go through life, son.

Certainly not for very long.

Any needless death is tragic, but it becomes even more so when what amounts to suicide-by-cop is ginned up by the press as an example of systemic racism.

The AP writeup was especially horrid, headlined by the Omaha World-Herald with “Black man killed by Rochester police is remembered as loving.”

Worse, the AP doesn’t reveal this bit until the 28th paragraph:

The report lists excited delirium and acute intoxication by phencyclidine, or PCP, as contributing factors.

That seems important, doesn’t it?

It certainly seems too important to Insanity Wrap to bury it far further down in the story than most people will ever read.

Not to the people who would pit us against one another for political gain, it doesn’t.

In fact, it’s more important to our Democrat-Media Complex to bury the truth as deep down as they’re able.

This is exactly what’s wrong with New York these days:

The battle against gun violence has plagued every city across the country, and on Labor Day in particular, New York City usually has to contend with a higher than average number of shootings.

Now a bar on Long Island is making a game out of the violence, and the struggle to quell it.

Patchogue bar The Cliffton posted their sick game on Facebook, pitting NYC against Chicago. The chart is set up like a typical Super Bowl pool, with patrons picking the number of shootings each city will see, and winning money if they choose the right numbers. Beneath the scoreboard, it says “let the shooting sprees begin!”

When we say, “this is exactly what’s wrong with New York,” we do not mean The Cliffton’s fun little betting pool.

What we do mean is a mainstream news organization in a “straight” news report categorizing The Cliffton’s game as “sick.”

Insanity Wrap believes pools like these are just people trying to have a little fun and make the best out of a bad situation — a bad situation created (and certainly abetted) in no small part by mainstream news organizations.

The mayor is arguably worse:

Mayor Paul Pontieri called the wagering “foolish at best and disgusting at its worst because it isn’t what we are about.” Pontieri is urging the police and state liquor authority to get involved, given that gambling at the establishment is illegal.

These days it feels to Insanity Wrap like everything not compulsory is forbidden.

Previously On Insanity Wrap: Joe Biden Hits the Campaign Trail, It Hits Back

Would you let this robot swab your nose for a coronavirus test? https://t.co/AtiJwrXjnQ

Not just no, but hell no.

When Insanity Wrap was a wee lad of five, we had to undergo a bone marrow biopsy in order to diagnose what turned out to be a temporary and mostly harmless blood disorder.

If you aren’t familiar with the biopsy procedure, it is excruciating.

With nothing more than a topical anesthetic where the doctor makes the incision into the thin skin covering the back of your hip bone, they then take a frighteningly large needle and break directly into the bone with it in order to extract the marrow.

We can still remember every detail of that evening as though it were yesterday, even though it was actually 46 years ago.

And yet, Insanity Wrap would almost — almost! — rather undergo another bone marrow biopsy than allow a robot or even a human to jab a Q-tip all the way up under our precious eyeball.

I Was Framed, I Tells Ya

But there’s also this:

Nancy Pelosi might have violated lockdown orders and needlessly endangered herself and others for a simple wash and blow, flaunting her rich white lady privilege in front of the entire world while claiming the very people she put at risk somehow framed her…

…but ermahgerd doesn’t she look fabulous?

Insanity Wrap must warn you that this story contains internet-transmissible onion fumes.

The Labrador retriever guide dog was recently matched with his owner Anastasia Pagonis, a blind 16-year-old who quickly succeeded at competitive swimming after losing her eyesight two years ago. Two weeks after being introduced, Radar and Pagonis are residing at the Olympic Training Center in Colorado Springs, Colorado, where Pagonis, one of the top athletes on the U.S. Paralympic Swimming Team, is training for a chance to compete in the 2020 Paralympics in Tokyo.

Click over for the whole thing while Insanity Wrap clears the office air of all this dust.

Because His Lips Are Moving?

What is it that the left says these days? Oh, yeah: “Silence is violence.”

During the entire four days [of the Democratic National Convention], with tens of millions of people tuning in and the chance to “condemn violence of every kind,” not a single speaker at the Democrats’ convention did so. Every one of them was silent.

We searched through the transcripts of the four days, and the only time the word “protesters” was uttered was after the adjective “peaceful” — seven times on day one of the convention, in fact.

Sen. Bernie Sanders, in one invocation of the term, complained that Trump had “deployed the military and federal agents against peaceful protesters.”

Team Biden cares about the polls — about winning — more than they care about stopping riots and protecting lives and property.

If they were to believe it had become politically expedient again to encourage the riots, that’s exactly what Biden and the Democrats would do.

I haven’t seen a hair salon since January.

On Monday: I researched very responsibly and found a salon in NJ that was legally open. I booked (via text) an appointment for today.

I was NOT framed. pic.twitter.com/6C6bPCwvKK

*But you knew that already.