Insanity Wrap needs to know: When is cowardice the better part of valor?

Answer: When it involves a Democratic presidential nominee, silly. 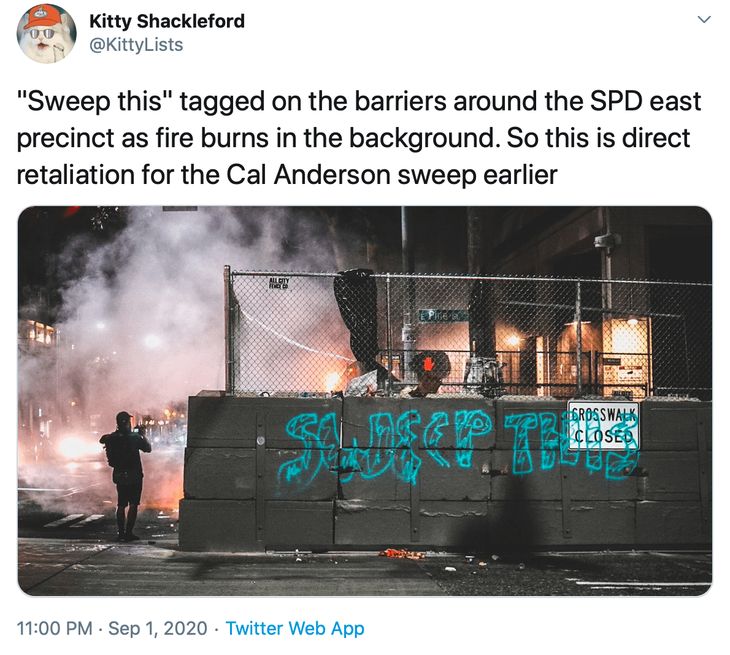 Read that again: “They recently barricaded the door with quick drying cement & set building on fire.”

If that isn’t attempted murder — by one of the most horrible methods possible — then what is it?

Well, We Suppose That’s a Take 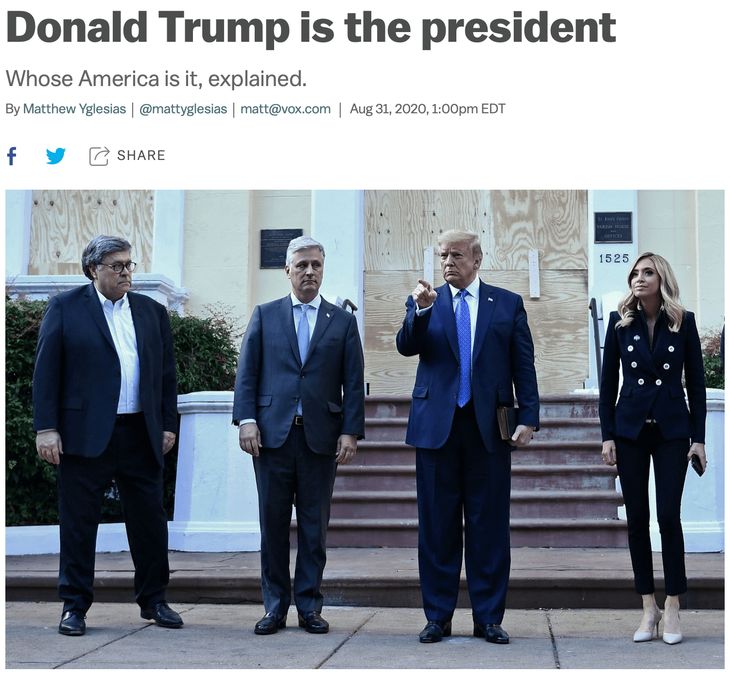 Violent Riots Are Happening in Trump’s America, Not Biden’s

You might know Matt Yglesias by his work for the young adult infotainment site, Vox. Insanity Wrap always thinks of him as the writer made out of equal parts ignorance, gall, and asbestos, given the nature of his frequent hot takes.

In his latest, Yglesias used 1,425 words worth of weapons-grade handwavium trying to convince readers that this is “Donald Trump’s” America and that the violent riots — which were “mostly peaceful protests” and “fiery but peaceful” until the Left realized how unpopular they are — are all Trump’s fault.

This is not Donald Trump’s America. This is our America, and it’s a big place with a continent’s worth of variety in regions and in people.

Trump’s America, if we’re to go by the people who voted for him, tend to be more exurban or rural, middle class and blue-collar, and generally peaceful and well-governed. Crime rates in Trump’s America are more like, say, Switzerland than …oh we don’t know… Chicago.

The places where Trump lost big in 2016 (and likely will again) are Democrat-run s***holes with rising crime, angry wanna-be Communist revolutionaries taking to the streets, and sometimes at night they’re on fire.

They’ve also been run entirely by Democrats, usually without interruption or respite for decade after decade.

In other words, Yglesias — the “explainer” journalist who once claimed that there is some kind of miles-long bridge over Israel proper connecting the Gaza Strip to the West Bank — is trying to pin decades of local Democratic mismanagement on less than four years of Trump in the Oval Office, far away.

As we said: Equal parts ignorance, gall, and asbestos.

When You See It…

This picture from Kenosha, WI today speaks for itself. pic.twitter.com/vtmoTANFOm

Spend two minutes and 40 seconds indulging in well-deserved schadenfreude as Democrats begin to realize the magnitude of their many errors this campaign season.

When the polls were at their most bleak this Spring — not coincidentally when Punxsutawney Joe was still safely ensconced in his basement — one of our PJ Media colleagues confessed to us that they were having doubts about November.

While we had had our dark moments, in the end we beat them back with two thoughts.

The first was the polls. It wasn’t that the polls were necessarily wrong in the moment, but that we believed there was much more room for movement between spring and autumn than is usually the case. With Biden hidden away and Trump dealing with the pandemic and economic sabotage by Democratic governors, the American people weren’t getting a realistic view of the major party candidates.

That would change at the conventions, Insanity Wrap assured our doubting colleague, and that has certainly proven to be the case.

Our second thought was that “It’s his turn!” candidates are almost always losers.

Biden won the nomination because he was the next — well, last really — of his generation in line, and because he seemed safe in a field of wackos, has-beens, and the not-quite-ready-for-primetime.

The GOP frequently used to nominate candidates on the same basis, and Insanity Wrap must ask: How did the administrations of President Dole, President McCain, or President Romney work out?

That’s a struggling small business doing what they must to avoid being ransacked by the very same “mostly peaceful protestors” it took Slow Jow Biden three months to denounce.

Insanity Wrap would remind you that Kenosha’s last Republican mayor left office in 1992.

Insanity Wrap wrote about this earlier: The Biden campaign, lacking a candidate with a firm hand on the rudder, is all over the place.

After months of denial that the riots were anything but peaceful, Biden finally denounced them two weeks ago — only to have his own running-mate go off message a few days later and smile as she told Stephen Colbert that the “protests” were here to say. And now, here is Biden’s own spokesweasel, also off message, trying to generate a Reality Distortion Field around riot-torn Kenosha.

CORRECTION: Thanks to a sharp reader for alerting us that the infamous Kamala Harris interview with Colbert is actually from June, so she was not off-message as we had believed. Considering that Harris said in June that the protests would continue for a long time, she was right on the money. We were not, and regret the error.

Imagine you’re a resident of Kenosha, living in fear for your neighborhood or your business, and the presidential nominee of the party you’ve supported for years has spurned you in favor a Big Lie about “the peaceful nature” of what’s happening to your city.

This is at best a badly run campaign, and Insanity Wrap blames the infirm old man at the top of it.

So will the residents of Kenosha, we hope.

UPDATE: The Biden campaign has wised up and decided to send Joe to Kenosha on Thursday.

We’re very much looking forward to doing a Compare & Contrast on Trump’s and Biden’s visits on Friday’s Insanity Wrap.

This morning’s subject of mental instability comes from our nation’s capital. Washington, D.C., Mayor Muriel Bowser — a Democrat, of course — has put together a group to determine whether the Washington Monument is a racist symbol of oppression or something.

If you think they’re crazy now, Insanity Wrap says just wait until the Left realizes that obelisks like the one erected to memorialize our nation’s father have for millennia represented giant phalluses.

Talk about flaunting your male privilege.

The Story Not Even Insanity Wrap Will Cover

Nancy Pelosi flaunted her Rich White Lady privilege to force open a salon against local orders just so she alone could get a wash and blow, and then denied that she knew she’d done anything wrong?

Insanity Wrap is so surprised by all of this that we very nearly yawned.

What we would really like to see is an investigation into how Pelosi may have used the ObamaCare negotiations between the House, Senate, and White House in 2009-10 to further enrich herself. We have always pictured her at the time with two cellphones. One had Barack Obama, Harry Reid, and Steny Hoyer on speed-dial. The other had her broker.

You will never convince Insanity Wrap that this wasn’t the case. Sadly, you’ll also never get anyone to seriously look into the depth of insider dealing and grift going on at the time.

Mrs. Insanity Wrap has spent the last six months working from the sofa, typically with two laptops and two smartphones up and running at all times.

Previously On Insanity Wrap: Joe Biden Hits the Campaign Trail, It Hits Back