Insanity Wrap needs to know: When do we get to drop the “mostly peaceful” fiction?

This is a big deal.

Jay Bishop, whose real name was Aaron Danielson, was a member of Patriot Prayer, a conservative protest group. The group’s Facebook page says that they’re “about fighting corruption, big government, and tyranny using God for strength and the power of love.”

The media generally refer to Patriot Prayer as “a far-right” organization.

This is the video of Bishop getting shot to death on the 95th night of Portland’s mostly peaceful protests.

It sounds like someone is shouting, “We got a Trumper right here” just before the shots are fired and the man is killed. pic.twitter.com/MMCnp5iwtj

Insanity Wrap feels no need to remind you yet again that “mostly peaceful” means “partly violent.”

Protest and counterprotest coming together and occasionally clashing go back to America’s founding — and were old even then.

But this is different.

The man believed to be the suspect in Bishop’s murder is Michael Reinoehl, identified by a family member “as a man captured in photos and video seen leaving the shooting scene shortly before 9 p.m. Saturday.”

Reinoehl had been previously issued a citation on July 5th for “possessing a loaded gun in a public place.” 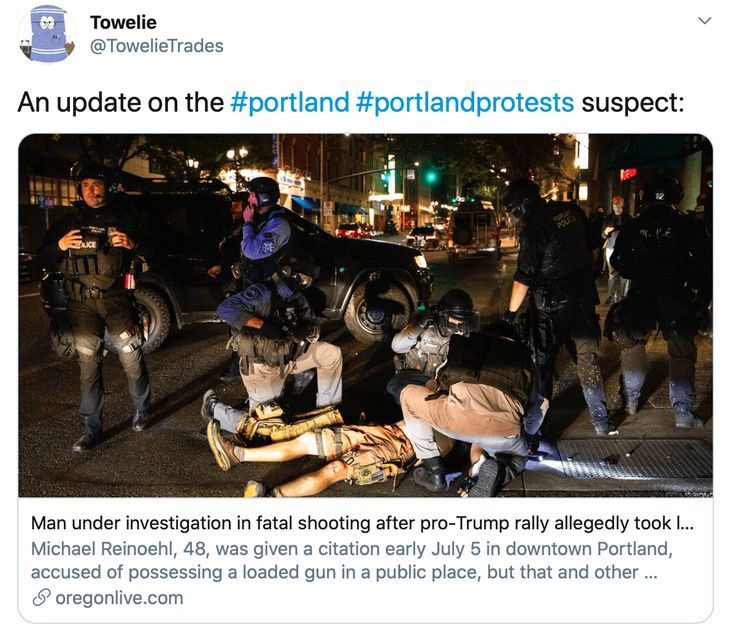 Insanity Wrap is generally understanding of the fact that passions run high whenever protestors and counterprotesters meet.

But here is where Insanity Wrap must add a big, fat “However!”

…Insanity Wrap’s understanding has worn so thin that it makes “threadbare” look like a new fur coat.

We suspect the same is true of much of the country at large.

For what it’s worth, here’s a link to the official Aaron Danielson GoFundMe sponsored by Patriot Prayer’s Facebook page.

Democratic presidential candidate-in-waiting Kamala Harris — who clearly can read an internal poll — tweeted, “I join @JoeBiden in condemning this violence” in Portland and other Democrat-run partly violent hellholes.

But the Washington Examiner’s Siraj Hashmi has Harris dead to rights.

among the ppl who were bailed out by @MNFreedomFund (which Harris promoted) includes 1) a man accused of attempted murder for shooting at a SWAT team, 2) a woman charged w/ 2nd-degree murder, and 3) a twice-convicted rapist who was charged in 2 other cases https://t.co/hebhUkMwF2 https://t.co/hLSlmuObQY

Are we really supposed to pay him any credence at all after all these months of his vicious ineptitude?

Insanity Wrap is certain the correct answer isn’t just “No,” but a Will Smith-worthy, “Aw, HELL, no.”

The long laundry list of complaints kept going, ultimately leading to Wheeler’s accusation that the riots plaguing American cities were the fault of President Trump. “It’s you who have created the hate and the division,” he said. “It’s you who have not found the way to say the names of black people killed by police officers, even as people in law enforcement have.” Wheeler then repeated the debunked claim that President Trump had praised white supremacists.

Bizarrely, he then called on every other elected leader in Oregon to stop the violence, as if the riots in Portland have been the fault of anyone else besides the mayor of Portland. Perhaps that’s a veiled accusation against Gov. Kate Brown (D-Portland) for not deploying the National Guard, but it came off as yet more in Wheeler’s endless blame-shifting.

Nevertheless, Wheeler continues to blame President Trump for the months-long troubles in his city, even though it was Wheeler who demanded that Trump order federal law enforcement to stand down and retreat from Portland weeks ago.

Previously On Insanity Wrap: ‘Fiery But Peaceful’ Is a Thing Now

The Shutdown Was All for Nothing

The Centers for Disease Control and Prevention has issued a new report detailing how many COVID-19 deaths in America also involved other underlying health conditions.

Insanity Wrap must conclude that quarantining the healthy was perhaps the biggest self-inflicted wound on this country since FDR enacted the New Deal and extended the Great Depression by seven years.

Shutting down for the first two weeks, while we were still figuring out what was going on and needed to bend the curve?

Yes, of course, that was the right thing to do.

Sending millions out of work and practically destroying the travel and service industries?

At this point, Insanity Wrap can do little other than shrug our shoulders at the neverending car wreck that has been the last six months and say, “So that happened.”

Get Out While the Getting Is Good? Too Late!

New Yorkers Are Fleeing to the Suburbs: ‘The Demand Is Insane’

It’s almost as though if the government makes a city unlivable, people won’t want to live there anymore:

Over three days in late July, a three-bedroom house in East Orange, N.J., was listed for sale for $285,000, had 97 showings, received 24 offers and went under contract for 21 percent over that price.

On Long Island, six people made offers on a $499,000 house in Valley Stream without seeing it in person after it was shown on a Facebook Live video. In the Hudson Valley, a nearly three-acre property with a pool listed for $985,000 received four all-cash bids within a day of having 14 showings.

Since the pandemic began, the suburbs around New York City, from New Jersey to Westchester County to Connecticut to Long Island, have been experiencing enormous demand for homes of all prices, a surge that is unlike any in recent memory, according to officials, real estate agents and residents.

Insanity Wrap would remind you that lefties fleeing lefty mismanagement is what the Left likes to call, in their hippie-smuggy way, “a teachable moment.”

But in this case, mostly they’re the ones with the lesson to learn.

If the Portland Police’s estimate of crowd size is accurate, then 15% of those who attended last night’s protest were arrested

Insanity Wrap couldn’t help but think of an old joke.

“What do you call the police arresting 15% of antifa/BLM?”

Unsafe, unprofessional intercept of U.S. bomber by Russian aircraft over the Black Sea

Video — which unfortunately won’t embed here — at the link.

At approximately 11:19 a.m. on Aug. 28, 2020, two Russian Su-27 Flanker pilots intercepted a U.S. Air Force B-52 bomber that was conducting routine operations in the black sea over international waters. The Russian pilots flew in an unsafe and unprofessional manner while crossing within 100 feet of the nose of the B-52 multiple times at co-altitude and while in afterburner causing turbulence and restricting the B-52’s ability to maneuver.

Insanity Wrap loves the professionalism of our pilots and aircrews, even under unnecessarily adverse (not to mention stupid) conditions.

Because in our dark little heart, Insanity Wrap will never be more than 14 years old, and we deeply hope the same is true of the officers of the starship… Enterprise.