Insanity Wrap #32: Liz Warren Spells Out the Marxism for You, Plus Billy Joel as Nostradamus

Insanity Wrap needs to know: When is a hate crime actually a hoax?

Answer: Pretty much every time.

• Feel the peaceful protest hit you in the skull

Overnight on 19–20 Aug, hundreds of #antifa blocked an intersection by a hospital in order to attack @ICEgov Portland facility. Responding officers were hit w/rocks. Antifa then started fires on the street. They later smashed the windows of ICE building. https://t.co/hQ3sQ32cTP pic.twitter.com/1gDcAJDPXE

The city’s official site says that “streets were blocked to vehicular traffic by support vehicles associated with the group,” an act which doesn’t exactly strike us as being part of the right to “peaceably assemble.”

What about everyone else’s right to use the roads for travel?

At approximately 9:28 p.m., members of the group approached the windows and doors to the ICE building. These people began shining lights and lasers at Federal officers located inside of the building. Group members began kicking and banging on the doors and windows of the ICE building.

Federal officers exited the ICE building and members of the group began throwing large rocks as well as glass bottles at them. The large rocks were described to be the size of softballs.

That’s some heavy, pointy bits of peace being thrown at people’s heads.

Enough begging. Time to put down this insurrection.

Seen the Lights Go Out on Broadway

NYC’s top 1% pays 50% of all income taxes. Personal income tax in the NY area accounts for 59% of all revenues.

The city’s very wealthiest blocks have decreased by 40% +.

Atlas shrugged, as we always predicted it would.

New York City has always been ruthless about taxing the bejeebus out of the rich, even the ones who live there only parttime.

The thing is, the City in recent decades made it worthwhile.

But now the restaurants are closing, the high-end retailers are suing to get out of their leases, and the luxury condos sit high atop neighborhoods where it’s no longer safe to walk the streets at night.

Or even during the daylight hours.

Why would your typical millionaire or billionaire stay, Insanity Wrap wants to know.

Apparently, they aren’t staying — and taking their tax dollars with them.

You know those lights were bright on Broadway-
But that was so many years ago…
Before we all lived here in Florida-
Before the mafia took over Mexico.

He was off by all of three years.

When You See It…

Insanity Wrap tried to give last night’s Democratic National Convention speakers all the respect they deserved, which nearly brought our attention level up to “Wha’?”

However, PJ Media’s Bryan Preston did catch it, and Insanity Wrap was still just sharp enough after a 14-hour workday to grab a screencap.

It left us wondering, “Why not just come out and say it, Liz?”

How well thought out was Warren’s “subtle” endorsement? As Bryan noted, the letters were so perfectly framed in the screen that even when CNN occasionally double-stacked the graphics at the bottom of the screen, “BLM” was still visible.

Someone gave those three little letter blocks an awful lot of thought.

This Hasn’t Aged Well, Has It?

We do so enjoy this little flashback to one of the great presidential self-owns of all times.

BTW, the next time someone tells you Trump doesn’t act presidential, Insanity Wrap would love it dearly if you would send them the link to that tweet.

Forgive Them, Lord, Even Though They Know Exactly What They Do

Hillary Clinton still lives in a Chardonnay fog rich and thick enough to make her believe she’s the “real” winner of the 2016 election — the legal result of which she still hasn’t accepted.

So Insanity Wrap forgives her that, even though literally every time she speaks in public she tears at this country’s already tattered social fabric.

But Vox, the so-called explainer site, is supposed to know better than to mindlessly parrot the deranged rantings of America’s most hateful loser.

Insanity Wrap hopes they catch something extremely itchy and long-lasting.

Does She Look Antifa to You?

A 23-year-old woman and a 16-year-old face criminal charges that accuse them of painting swastikas and anti-Semitic images on several University Heights businesses last month.

But… here is the 23-year-old’s Facebook profile, courtesy of PJ Media’s own Paula Bolyard — an Ohio resident who would seem to have more interest in digging into this story than Cleveland.com’s Kaylee Remington did.

She sure looks antifa to Insanity Wrap.

America’s supply of real rightwing hate crimes isn’t enough to meet the Left’s demand for it, so they go the extra mile to create fake hate crimes.

Today I authorized the City to disconnect utility service at a house in the Hollywood Hills to stop the large parties held there in flagrant violation of our public health orders. Parties like these can quickly and easily spread the virus and put our communities at risk.

Insanity Wrap was saddened by several of them, simply because we were not surprised by how many people are cheering on Garcetti’s petty tyranny.

This tells us Los Angelenos are happy to be abused, and that the beatings will continue because they enjoy them.

Seen the Lights Go Out in California, Too

Bully for you, Gov!

Newsom and his Democratic Party are the ones who put California “all-in” on more expensive, less efficient power generation, all the while refusing to perform the forest maintenance that makes wildfires less likely nor investing in the rural infrastructure that makes fires easier to control.

At 6:30 p.m. on Friday, Pacific Gas and Electric, California’s biggest utility, began shutting off power in rolling outages to force a reduction in demand. Southern California Edison also denied power to homes, beginning just before 7 p.m. Shutoffs impacted a rotating group of up to 2 million customers until 11 p.m.

The California Independent System Operator declared a Stage Three Electrical Emergency, the first such emergency since 2001. Spot electricity prices soared to more than $1,000 per megawatt-hour, more than 10 times the usual price.

In 2018, 19% of California’s electricity came from rooftop and utility-scale solar installations, the highest percentage in the nation. But by 6:30 p.m. each day, that solar output approaches zero. The state lacks enough reliable electricity generation capacity to run everyone’s air conditioner during hot summer evenings.

California has the least reliable electrical power system in the United States. It isn’t even close.

While Insanity Wrap tries very hard sometimes not to indulge in schadenfreude, we eagerly await the day some thousands of well-meaning wealthy California progressives go to plug in their taxpayer-subsidized Teslas and find there’s no juice to run them. 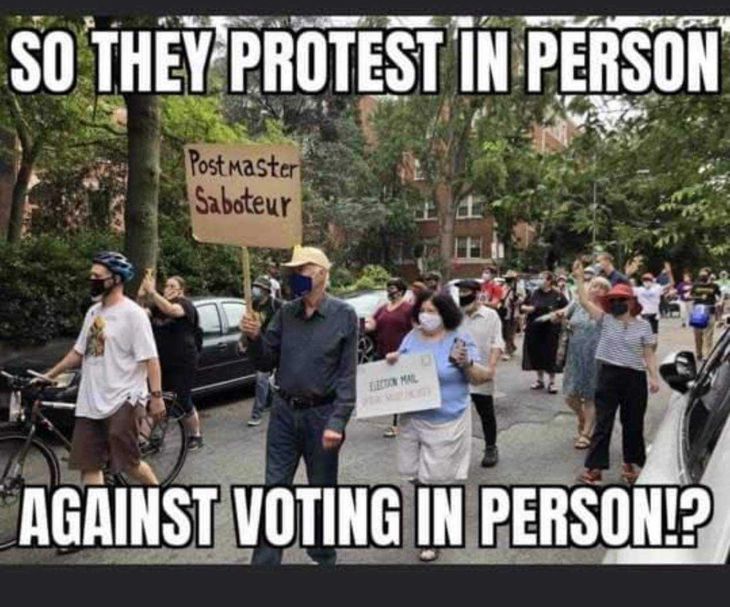 Protests generate invisible First Amendment rays that block the transmission of the Wuhan coronavirus because science.

Previously On Insanity Wrap: The Only Swedish Model We’ll Ever Date, Plus Meet Mr. Jill Biden