Insanity Wrap needs to know: Why does democracy die in darkness?

Answer: Because the Washington Post likes to do it with the lights off.

• Champagne goes from brut to glut.

• Antifa puts a little spring in its riots.

Even during the day time, the area around the Portland federal courthouse is lawless as police are instructed to stay away. After BLM protesters harassed and assaulted those standing with flags, they beat up a man. Video by @livesmattershow: pic.twitter.com/8IGn0Z3P9E

And didn’t each of us learn in civics class all those years ago that some violence, so long as it isn’t more than 49%, is a perfectly acceptable form of political discourse? 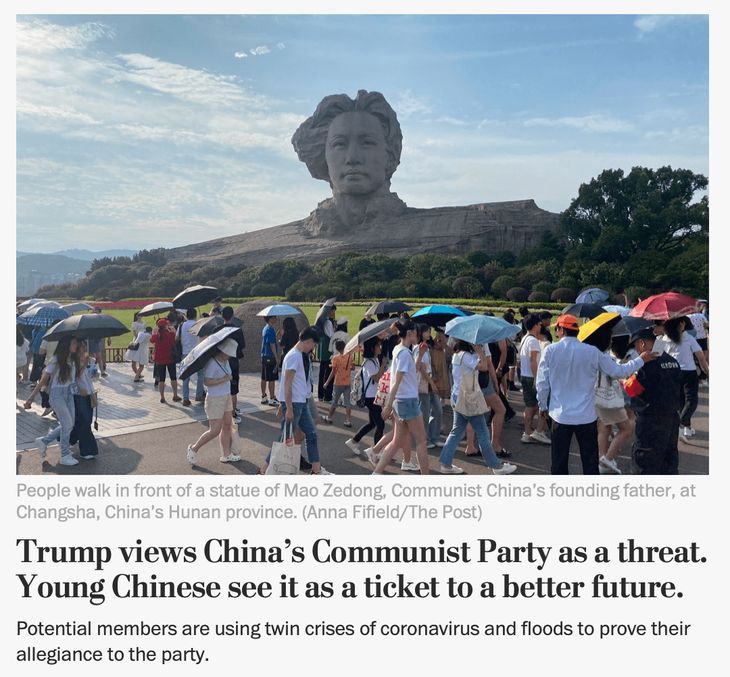 Heritage’s John Cooper tweeted: “When your masthead bears the slogan ‘Democracy Dies in Darkness,’ a headline like this seems pretty tone-deaf, considering ‘young Chinese’ have no access to information or media not sanctioned or allowed by the Chinese Communist Party.”

But it isn’t just the headline.

What follows is from a “real” news story published in WaPo’s “Asia & Pacific” section, and not on the furthest left side of its crazy op-ed page.

After seven decades in power, the ruling party has faced potentially existential challenges over the past year, from pro-democracy protests in Hong Kong and an economic slowdown to a devastating coronavirus and, most recently, once-in-a-generation floods that have wreaked destruction across central China.

But far from diminishing its stature at home, as some in the Trump administration appear to believe, the party’s response to some of these crises has helped solidify the support of existing and aspiring members — or at least neutralized grumbling.

Insanity Wrap just had a vision of Walter Duranty looking up from Hell and smiling a vicious little smile for Fifield.

sales of mega-pickups, which have basically been deliberately designed to intimidate and kill pedestrians, are booming https://t.co/RpCLHH3PCE

From further down in Cooper’s uninspiring thread is this nugget: “Hundreds of conservatives here doing their best to demonstrate that yes, huge trucks are about postmodern culture war signaling and unsubtle Freudian neurosis.”

Whether complaining about our guns or trucks, it’s always about small penises with the Left.

The Entirety of 2020 Explained in One Science Story

Japanese beetle survives being eaten by a frog more than 90% of the time by squeezing out the amphibian’s rectum.

We hope you had a light breakfast:

Incredible footage shows a small aquatic beetle being squeezed from the rear end of the black-spotted frog nearly two hours after being eaten in lab experiments.

Out of 15 experiments with the Regimbartia attenuata beetle species, 14 escaped from the frog’s rectum unharmed and started scuttling around the glass tank.

Previously On Insanity Wrap: NBA and MLB Are So Woke and So Broke

A Reminder That Everyone Has the Vote, Even These People

Seminars for human pet training is a thing, we have just learned.

We wish we hadn’t.

Whatever you want to do in the privacy of your own home, Insanity Wrap says go for it.

Whatever you want to do in a gym with cameras rolling is fair game for ridicule.

And, yes, grown adults playacting as dogs on leashes for some kind of therapeutic benefit are asking for all the ridicule anyone can deliver.

As Insanity Wrap is fond of reminding you: These are Heinlein’s Crazy Years — we just live in them.

There’s really only one question: Why?

At Least They Aren’t Dressed Up as Dogs

In case you had any doubts about the serious nature of the ongoing protests in Portland, Insanity Wrap presents two adult-sized children jumping on a mattress in the middle of the road.

When asked by a local reporter why they were jumping on a mattress, one of the adult-sized children said, “Because the pigs killed that George… someone.”

They expect about 100 million bottles to be languishing unsold in their cellars by the end of the year.

“We are experiencing a crisis that we evaluate to be even worse than the Great Depression” of 1929, said Thibaut Le Mailloux of the Champagne Committee, known by its French acronym CIVC, that represents some 16,000 winemakers.

Recognizing the urgency of the problem, the CIVC is launching unprecedented damage-limitation measures. Like oil-producing countries, the committee regulates the size of the harvest each year to avoid the kind of excess production that would cause bottle prices to plummet. At a meeting scheduled for Aug. 18, it’s expected to impose a cap so tight that record quantities of grapes will be destroyed or sold to distilleries at discounted prices.

While it’s nothing fancy, and technically not even champagne, Insanity Wrap’s lovely bride of 18 years goes through about two bottles of Korbel Brut sparkling wine each week.

But Insanity Wrap would wager she’d be more than willing to up her game.

In the interest of not wasting excellent French grapes in record numbers, we hereby volunteer our and our bride’s services to bring this emergency situation to a quick and satisfying end.

What we’re trying to say is, “Dear France, we’ll drink anything you send us. Promise.”

It’s the least we can do.

In the spirit of protesting the killing of George Floyd by jumping on a mattress, here are nuns at worship on trampolines courtesy of the brilliant Peter Cook and Dudley Moore.

Previously On Insanity Wrap: ‘F**k It. If One if Them Cops Got Killed, Good’