Memo to NYT Libel Merchants: The U.S. Military Is Not the Ku Klux Klan

The NYT editorial board chose Memorial Day weekend to smear the U.S. military with the Ku Klux Klan’s “blood-drenched tradition of racial terrorism.”

Maybe when they wrote “military” they meant to use “Democrats,” because as more people ought to know, the Klan was founded to serve as the Democratic Party’s shock troops against freed blacks in the South.

Pulling zero propaganda punches, the NYT’s banner art included an image of a white bullet with eyeholes cut out to look like a Ku Klux Klan hood.

Never mind, I guess, that the military was one of the first segregated American institutions to be fully integrated, and with almost mind-blowing speed following President Harry Truman’s order to do so.

If there are any formerly segregated institutions in this country that need to be held to account for their current treatment of black America, it’s the Democratic Party. While there are serious doubts about whether President Lyndon Johnson ever claimed he’d have “n*****s voting Democrat” for 200 years, there are no doubts about the authenticity of this explicitly racist recording:

Like Johnson, Truman indulged in the personal-level racism so common at the time but he did choose to do the right thing for the U.S. military. Since then, our integrated military has also become an all-volunteer force where people of all colors can and do choose to serve with honor and pride.

While Democrats were busy building and manning the Klan, lynching their black neighbors, and enacting Jim Crow laws, Republicans were busy with other things, as Robert Spencer reminds us:

Republicans didn’t forget about black Americans after Lincoln was shot, but actually stood up for the civil rights of black Americans consistently from the Civil War on, and there was no “Southern strategy.” It is a historical myth like so much of what is taught as American history today, designed to ensure that students will grow up to be convinced and loyal leftists. But like all propaganda initiatives, it founders on the facts.

Read the whole thing, which Spencer coincidentally published the same day as the NYT‘s smear job.

While it’s just more coincidence, the NYT‘s editorial followed closely on the heels of alleged Democratic presidential nominee Joe Biden telling black radio host Charlemagne tha God, “If you have a problem figuring out whether you’re for me or Trump, then you ain’t black.”

There’s a word for people who claim that people of certain colors must behave in certain ways. What’s that word again?

No one is going to mistake Biden for a member of the Ku Klux Klan, but his racist “joke” that if you don’t vote Democrat then you aren’t “really” black is a smear as old as the post-Jim Crow Democratic Party.

The whole point of the Blexit movement was to show that you could be black and not a Democrat — and the response from “progressive” Democrats has been as awful as it is predictable.

Perhaps the response has been so vicious because President Donald Trump polls better with black Americans, by far, than any Republican president in generations.

A Twitter user calling themselves Adagio for Strings had this important reminder for the NYT: 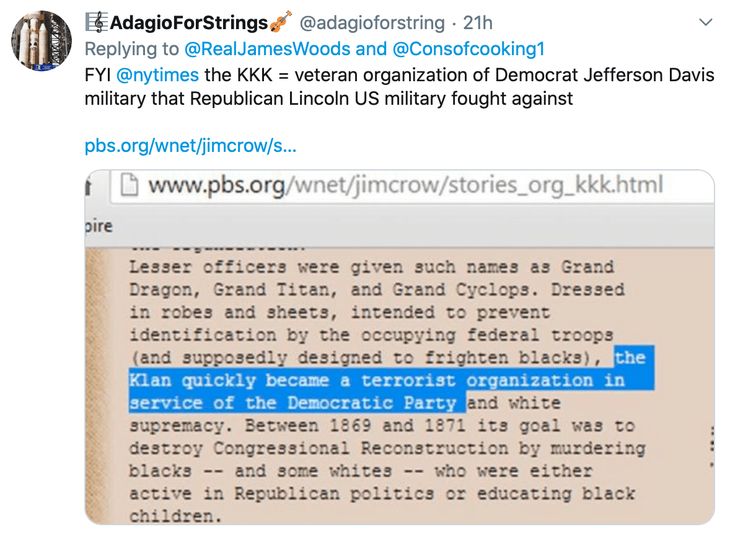 In a follow-up tweet they added, “The US Army fought on the side of the abolitionists during the US Civil War.”

Can you guess what word is missing from the NYT‘s massive 2,000-word editorial?

Choose wisely, because you only get one guess. 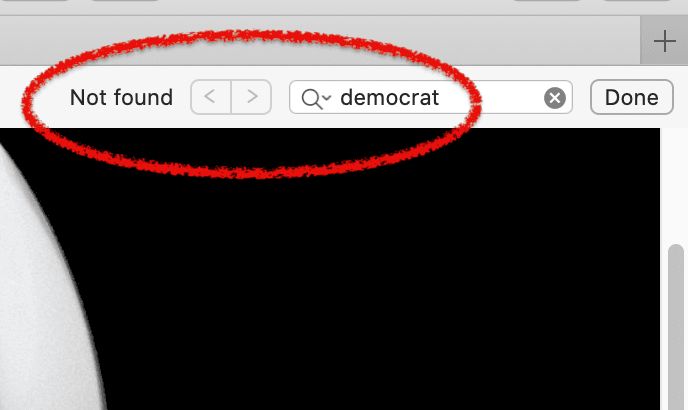 The NYT required so many words because their premise was so weak, a lot of sound and fury to cover up the fact that they have nothing. The editorial’s main complaint is that the military named some bases after Confederates and racists, mostly when Democrats were in charge. Therefore, the military isn’t much different than the Klan.

This is weak sauce, even for the NYT.

I’d agree that renaming certain military installations is a discussion this country might want to have. But to raise this issue on Memorial Day weekend, when the country pauses to honor all those who have fallen is like something out of a Soviet newsreel.

The Kremlin usually portrayed the U.S. as a crime-ridden cesspit on the verge of a race war. The NYT makes it sound like we ought to have one.

Thanks to the Democrats and their Ku Klux Klan stormtroopers, we already had a small-scale race war, and a lopsided one at that. Even today, largely Democratic projects like the welfare state and public education have waged virtual war on black families, resulting in almost unending generational poverty. The U.S. military, on the other hand, has provided training, education, and upward mobility to black Americans for generations.

I’m sure the editors of the NYT are aware of all this, so it is easy to surmise that by tearing down our integrated military that they hope to destroy yet another opportunity for black America’s advancement.

How very Klanish of them.

Steve launched VodkaPundit on a well-planned whim in 2002, and has been with PJ Media since its launch in 2005. He served as one of the hosts of PJTV, a pioneer in internet broadcasting. He also cohosts "Right Angle" with Bill Whittle and Scott Ott at BillWhittle.com. He lives with his wife and sons in the wooded hills of Monument, Colorado, where he enjoys the occasional adult beverage.
Read more by Stephen Green
Tags: MEDIA BIAS MILITARY NEW YORK TIMES