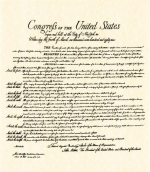 Congresswoman Anna Eshoo (pictured), D-Palo Alto, said Monday she will work to restore the Fairness Doctrine and have it apply to cable and satellite programming as well as radio and TV.

“I’ll work on bringing it back. I still believe in it,” Eshoo told the Daily Post in Palo Alto.

“It should and will affect everyone,” she said.

UPDATE: And don’t forget, we’re only one FEC decision away from having blogging count as contributions-in-kind to election campaigns. Raise a toast to the First Amendment — it was nice knowing you.