MSN reports that some states are starting to crack down on left-lane interlopers to keep traffic moving as well as temper road rage. During the busy summer travel season, the Washington State Patrol began stopping slow-moving motorists for violating the state’s left-lane law, which prohibits “impeding the flow of other traffic.”

“This is a real big hot-button topic for the public at large right now,” Washington Trooper Cliff Pratt told MSN. “We’ve had a lot of complaints from drivers who’ve had to deal with left-lane campers.”

Law officers have so far issued more warnings than tickets, but a citation for going too slow could also raise a dawdling driver’s insurance rates. “Any moving violation that applies points to a driver’s record could affect that driver’s car insurance rates,” Susan Gallik Rouser, a spokeswoman for Progressive, told MSN. “And because left-lane driving would be considered an infraction, we would take that into account when renewing a driver’s policy.”

Personally, I’d rather that left lane campers be given the chance to skip the fines and the points, and instead be beaten with sticks. Preferably, beaten with sticks wielded by people who were stuck behind them. I’m talking to you, Subaru Outback drivers, old people, and every single goddamn contractor with a pickup and a cigaret.

I’m also a fan of a program come up with years ago by… someone or other. It’s simple: 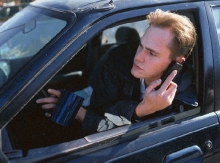 1. You may choose to take a very difficult series of driving skill and safety classes.

2. If you pass, you’ll be issued a car-mounted paint gun, and unwashable paint encoded with your DNA (so that it can’t be faked).

3. If you see another driver do something, anything really stupid, you shoot their car with your paint.

4. Any police officer who sees a car tagged with three paint spots must (must!) immediately pull that car over and issue them a $3,000 “asshole ticket.”

With this plan in place, we wouldn’t even need any traffic laws — and not even half as many highway patrolmen. It’s a harshly libertarian solution to a problem government seems unwilling or unable to fix.