Netroots in Austin, with a Gore on top 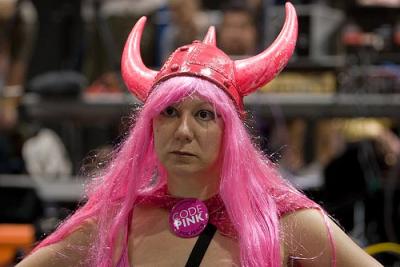 Name-dropping Al Gore and his call for a switch to clean, renewable energy within 10 years was enough to pull whoops of approval from the 2,000 or 3,000 marauding liberals gathered for Netroots Nation at the Austin Convention Center on Saturday morning.

So when the former vice president and Nobel Prize co-winner made a surprise — and cleverly scripted — appearance during U.S. House Speaker Nancy Pelosi’s talk, it looked like the conference might turn into a faint-in.

Talk that Pelosi (who is arguably so left-leaning that her parenthetical should be D-Beijing) would have a Very Special Guest had been buzzing about the conference of liberal bloggers, pols and media types since it began Thursday (it concludes today).

Also in Austin this weekend, the Defending the American Dream Summit is happening:

Texas conservatives convening in Austin today to discuss taxes, spending and the Internet can only marvel at Netroots Nation, a conglomeration of liberal bloggers and Democratic activists meeting here at the same time.

Nationally, there is nothing for conservatives like Netroots Nation, and Texas Democrats dominate the digital political space as they try to pry Republicans from the levers of power.

David Benzion, a political consultant, former talk radio producer and publisher of the Houston-based Lone Star Times (lonestartimes.com), offers a simple explanation for the smaller conservative audience: Republicans are in power in Texas, and until 2006, they controlled Congress as well as the White House.

Uh huh. They are all probably converging here for this.

UPDATE: Via Karl at protein wisdom:

It turns out that the denizens of the Daily Kos are just as humorless as the presidential candidate they support. Newsbusters notes that the Kos Kidz were able to bully the Austin American-Statesman into pulling a mildly satirical article on the Netroots Nation conclave in Austin. Apparently, some could not find the humor in a piece referring to House Speaker Nancy Pelosi as ”arguably so left-leaning that her parenthetical should be D-Beijing.” Or could not chuckle over the sight of New York Times columnist Paul Krugman “wearing, as if to galvanize stereotype, what appeared to be Birkenstocks” to a panel “that was essentially about how the media weren’t liberal enough.” (BTW, Newsbusters also has a copy of the full article.)

I would find this troubling, if I had any respect left for mainstream journalism.