Why Is The Times Square Bomber So Proud of Himself?

Guilty–And Proud of It!

I know the man who tried to bomb Times Square — not personally, but I know his style, his psychological modus operandi.

This week, Faisal Shahzad unexpectedly pleaded guilty to this crime. He displayed absolutely no shame. Shahzad, a Pakistani-born naturalized American citizen, was utterly unapologetic. On the contrary.  He was proud, contemptuous, and very, very cool. He found himself addressing a Jewish female judge  (the very Honorable Judge Miriam Cederbaum), whose authority he probably holds in great contempt. She questioned him closely and incredulously, and I am certainly glad she is sitting on this bench. 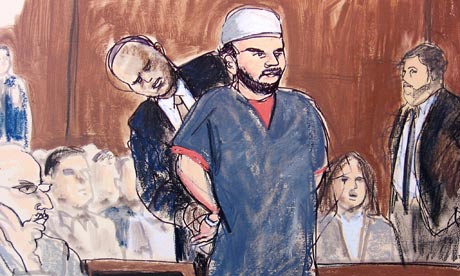 I want to plead guilty, and I will plead guilty a hundred times over until the United States pulls its troops out of Afghanistan, stops its drone strikes in Somalia, Yemen and Pakistan, stops the occupation of Muslim lands and stops killing the Muslims.

I am part of the answer to the US terrorizing the Muslim nations and the Muslim people, and on behalf of that, I’m avenging the attacks, because…the Americans only care about their people, but they don’t care about the people elsewhere in the world when they die. Similarly, in Gaza Strip, somebody has to go and live with the family whose house is bulldozed by the Israeli bulldozer. There’s a lot of aggression.

When asked if his intent was to do harm, he said, “Yes. Damage the building, and injure or kill them. One has to consider where I’m coming from — that is, I consider myself a ‘Mujahid,’ a Muslim soldier.”

Just like the Ft. Hood Army psychiatrist-shooter Nidal Hasan, who, upon awakening, simply asked for a lawyer, Shahzad also sees himself (and has been trained) as a jihadic warrior. This means that he is on a holy mission. As such, he does not abide by national or international secular-based laws and has no cause for shame. To him, his cause is just. His aggression is only a form of self-defense.

He reminds me of the fathers who honor kill their daughters and who claim, afterwards, that they are the real victims, that their daughters’ disobedience was a full, frontal assault on their “honor”; they were only defending themselves. These daughter-killers honestly view themselves, not the daughters whom they have hacked, suffocated, shot, or burned to death, as the real victims. They are filled with arrogance and pride and, if arrested, filled with self-pity because their act of valor is being treated as a crime.

Muzzammil (“Mo”) Hassan in Buffalo — the man who beheaded his wife — views himself as the “victim,” as the “abused” husband. From his Pakistani Muslim male point of view, he is “right.” A wife is supposed to take savage beatings without complaint and without telling anyone else about them — definitely without turning to the law, and to the secular law at that. Any woman who does so, who wants to leave the marriage, who seeks custody of their children, home, possibly bank accounts, is guilty of supreme insubordination and deserves a death sentence. This is true among Westerners who commit domestically violent “femicides.” It is even more true among Pakistanis who are almost never tried or found guilty in their own country for such a crime.

You can take the man out of Pakistan, but you may not be able to take Pakistan out of the man.

Americans just don’t understand how this part of the world thinks. But we had better start learning about it.

One more thing: Master Islamist indoctrinators and preachers of hate find fertile soil among both vulnerable impoverished orphan boys — and among the educated sons of middle-class fathers. Why? Because Arab, Muslim, and central Asian family dynamics may render many sons vulnerable to the illusion of  “benevolent” fathering — their own fathers have probably been both absent and abusive. Also, the fact that normalized child abuse cannot be spoken about renders both sons (and daughters) hyper-vigilant, “paranoid,” angry, ready to attack the outsider, the Other.

Read the academics on this. Read Mordechai Kedar, David Ghanim; read the memoirists on this, such as Ayaan Hirsi Ali, Nonie Darwish, Wafa Sultan. My God, even read my work on this.

Do not expect jihadic terrorists or honor murderers to sound repentant. Expect more outsized plots, more outsized expressions of justified pride. Only the Israelis know this and are used to it.

But, now we are all Israelis.