That which is rewarded is repeated. Apparently, the State of Oregon wants more antifa and Black Lives Matter rioting. At at time when violent rioters were setting fires, looting, and terrorizing the people of Portland, they were rewarded with U.S. CARES Act COVID relief funds.

Repeating: When Portland was burning, the state of Oregon gave the arsonists gasoline.

The group “SNACK BLOC” that received CARES ACT money designed to help people in need – or so we thought – is unabashedly antifa and BLM. It’s not even a semantical close call. Oregon’s Health Authority gave money to a group that came out of the shadows to support antifa and riots.

I say out of the shadows because according to Willamette Week, the loosely formed “group” supposedly existed for three years, but has no webpage, and just started a Twitter account timed to the beginning of Portland’s 100-plus days of non-stop rioting.

They participated in the attack on Portland Mayor Ted Wheeler’s home.

“You know you’re the fu–ing mayor, right? Like we’re at your building because we want YOU to stop the police officers from ‘repeatedly striking’ individuals.” 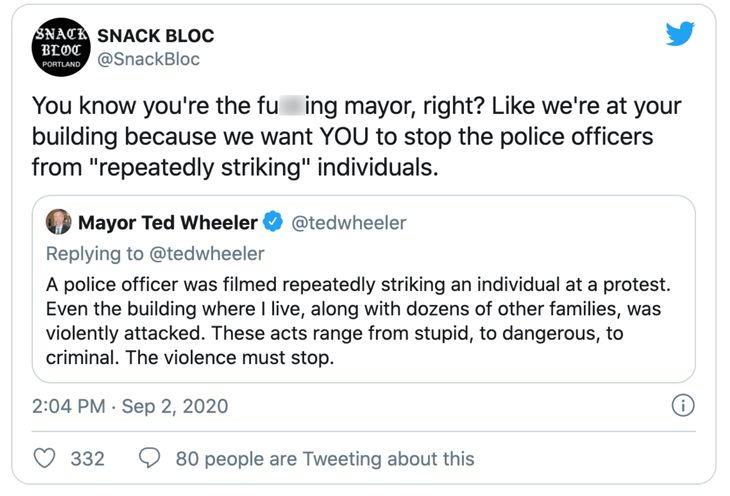 They “helped” “comrades” with bail.

AND filling out your jail support form https://t.co/WVHz4ifNck

The group “helped” to get rid of cops, like the Marxists they are. The group encouraged people to turn off their cell phones while at protests.

Just so you know, your cell phone is a fu–ing snitch. Don’t let that rat see you at a protest, and definitely don’t post pictures with it. Turn it off or put it on airplane mode.

They threw a “bloc party.” You know like “black bloc,” the clothes worn by members of antifa?

In case you’re skeptical about characterization of the group’s purpose, the local press knows exactly who and what it is.

Along with organizing its own events, Snack Bloc has been at seemingly every protest, march and vigil around the city over the past three months, providing snacks, water and supplies to protesters at the Stripper Strike, BLM Art Therapy and rallies across Portland.

In a video the group made  – your tax dollars at work – the group called for “burning it down” for the “revolution.”

Defund, Dismantle, and BURN IT DOWN. ✊🏾 Resources for the REVOLUTION

The group’s Twitter account started in June of 2020, when it came out of the shadows to conveniently become a 501c3 charitable group.  The Twitter account has been dormant since September 12, when the riots were smoked out by wildfires in the metro area. But they got their U.S. taxpayer money.

A community resource and support for rallies, protests, community events, vigils and more. Holler if you wanna start one in your town.

COMRADES! We’re prepping for the coming fall and winter and we could really use some funds to keep Portland safe and warm. If you’re able, please donate to our Venmo or PayPal. If not, please just Retweet to help.

COMRADES! We're prepping for the coming fall and winter and we could really use some funds to keep Portland safe and warm. If you're able, please donate to our Venmo or PayPal. If not, please just Retweet to help.

Their calls for money were answered. The Oregon Health Authority granted the antifa support group a health equity grant award of $145,000 in September. That money came directly from the CARES Act money intended to help people suffering from the COVID shutdowns, not people throwing super-spreader riot events.

When the awards were made in September, the head of the OHA said they were fully aware of the group’s receiving the money and noted how “vital” they are to “their communities” for the “collective work” to end racism, “especially relating to COVID-19.”

“We look forward to partnering with these remarkable organizations and communities, who do such vital work to serve their communities,” said Patrick Allen, OHA director. “We are deeply aware how these organizations’ linkages and knowledge of their communities and the challenges they face are so important to bringing resources to help. We look forward to the collective work to continue to meaningfully address the systemic racism and structural inequities that have caused so much health disparity, especially relating to COVID-19.”

Patrick Allen claimed that the money would go to groups “disproportionately impacted by COVID-19.”

The grants focus resources on communities most disproportionately impacted by COVID-19 and programs that will address health and economic disruptions, food insecurity and housing, and safety and violence prevention, among other aspects of need.

The OHA said that its criteria for doling out funds are:

One of these things is not like the other.

The loosely formed “SNACK BLOC” can hardly be supportive of “violence prevention” when it literally fed antifa and BLM rioters violently trashing the city.

The State of Oregon also granted money to another group with terror ties. The Center for Cultural Organizing received $275,000 in funding from U.S. taxpayers for COVID relief. This is the group that supported the imam from a Portland mosque, Al Saber “the sword,” which produced more than seven terrorists who supported Jihad in Afghanistan and elsewhere, including the Portland “Christmas Tree Bomber.”

From the group’s webpage:

Founded by Portland-area immigrants and refugees, the Center for Intercultural Organizing (CIO) was originally established to combat widespread anti-Muslim sentiment after 9/11. On September 8, 2002, authorities arrested a well-known Portland Imam at the airport—Sheik Mohamed Abdirahman Kariye, spiritual leader of the As-Saber Mosque (Masjed As-Saber)—falsely claiming his brother’s luggage contained traces of TNT. CIO’s founders organized a multicultural march and protest outside the federal building in downtown Portland, attended by local Muslims and other activists.

The imam the group was formed to help was booted from the country at long last after he was put on the country’s “No Fly” list in 2002. It also fetes the lawfare group of attorneys who defend GITMO detainees.

Portland is writing the tale of its own demise. We should at least insist they not use our money to do it.

We Just Had the Nation’s First Virtual School Shooting