Update: Reinoehl was shot and killed in a confrontation with police Thursday night.

A man suspected of shooting a Donald Trump and police supporter in downtown Portland on Saturday night now appears to have admitted to doing it for the most virtuous of reasons.

Michael Reinoehl told Vice News in an exclusive interview that he acted in the defense of a friend “of color,” all but admitting to the shooting of Aaron “Jay” Danielson. (Vice does note, however, that it “has not independently verified details of his story.”)

But the message in the statement was obvious to anyone who knows anything about the mostly white antifa protesters. The group that claims to “defend our city” against “facists” and “racists” considers anyone right-of-center to be an enemy and “-phobe” or “-ist” who should be dispatched. They’ve rioted alongside Black Lives Matter, Inc™ on a nightly basis for nearly 100 nights in Portland.

The unsaid conclusion is that Danielson must be a racist killer! But there’s no evidence of that, either.

In fact, there’s the opposite. A photo of Danielson exclusively provided to PJ Media shows this alleged racist smiling next to a black friend. And Patriot Prayer, of which Danielson appeared to be a part, is racially diverse, seemingly more so than antifa. Patriot Prayer’s leader is Hispanic and there are several blacks and other people of color involved in the group.

Danielson was still in downtown Portland as the Saturday pro-Trump, pro-police caravan of cars began to wind down. He was shot twice in the chest after antifa and Black Lives Matter, Inc™ agitators spun out of control. A voice in the video of the murder can be heard to say something like, “we got a couple right here,” before two shots rang out. An eyewitness, a friend of Danielson’s, claims it was nothing short of an execution.

‘I Did Not Hit Anyone Innocent,’ Portland Man Suspected of Killing Trump Supporter Says

The rioters gathered in downtown Portland to confront a convoy of Trump and police supporters. The miles-long caravan of cars and trucks flying American and Trump flags was accosted and assaulted. Read a first-hand account of the caravan from a retired police officer here.

But Reinoehl fancies himself a hero and protector. He’s a man of consequence, who acted in self-defense when his friend “of color” — he hastens to point out — was in peril.

Lots of lawyers suggest that I shouldn’t be saying anything, but I feel it’s important that the world gets a little bit of what’s going on. There’s been a lot of propaganda put out there.

While Portland police haven’t found Reinoehl to arrest him or question him, freelance journalist Donovan Farley did and shared the interview he did with the suspect with Vice

I had no choice. I mean, I had a choice. I could have sat there and watched them kill a friend of mine (pause) of color. But I wasn’t gonna do that.

There’s no apparent evidence to support his version of events from the Saturday night “execution” (as one witness put it), but Reinoehl told Farley, in what was touted as an “exclusive” interview, that he was tired of the misinformation out there. He wanted to set the record straight.

Retired Cop Blows Up ‘False, Fake’ Democrat Narrative on the Execution of a Portland Trump Supporter 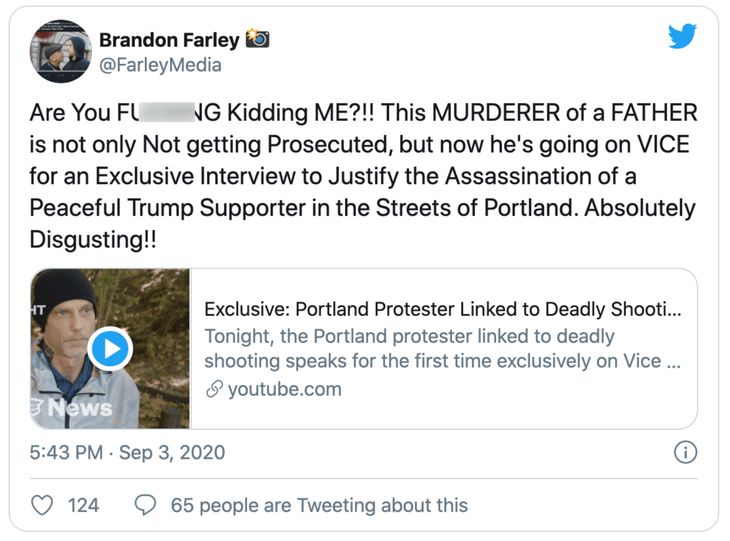 A note of caution for the man who now claims he acted in defense of a friend. As one videographer found out when antifa beat him and then surrounded him again, causing him to draw his gun, but not fire, self-defense doesn’t fly in Multnomah County. He’s appealing his conviction to the U.S. Supreme Court. We’ll see if the alleged antifa killer is treated the same way.

Watch the interview on Vice News:

Editor’s Note: Want to support PJ Media so we can keep telling the truth about the riots and attacks on law enforcement? Join PJ Media VIP and use the promo code LAWANDORDER for 25% off your VIP membership.

‘I Am 100% ANTIFA All the Way,’ Portland Shooting Suspect Said, Warning of ‘War’ to Come

Victoria Taft is an award-winning journalist, writer and terrestrial radio talk host, heard in Seattle and on the rest of the Left Coast. Listen to her twice weekly  “Adult in the Room Podcast.” Find her at VictoriaTaft.com  Parler, MeWe, Minds, Locals, Twitter & Facebook. Her book mocking antifa will be out this year. For media inquiries write: [email protected]
Read more by Victoria Taft
Tags: ANTIFA BLACK LIVES MATTER PORTLAND