Memorial Day 2020 at the Arlington National Cemetery was a more quiet affair than in years past.

You can be forgiven if you feel ripped off. The national holiday to remember the men and women who have fought our wars and given the ultimate sacrifice should be honored by everyone.

This year, flyovers, picnics, services and pancake breakfasts all have been canceled.

Because of COVID-19, no massive numbers of people were allowed to overwhelm the grounds, though families who wished to come in a socially-distanced way were allowed.

The Old Guard prepared the thousands of gravesites with “flags-in” in the days prior to the weekend.

In the past, Arlington has been full of people, especially as the president lays the wreath at the Tomb of the Unknowns, under the careful watch of the Old Guard.

"Our fallen warriors gave their last breath for our country and our freedom. Today, let us pause in quiet reverence to reflect on the incredible dedication of these valiant men and women and their families."

Memorial Day As It Should Have Been

This was the scene from 1987. Look at the crowds at the amphitheater near the Tomb of the Unknowns.

Military personnel and civilians gather in the Memorial Amphitheater for Memorial Day observances at Arlington National Cemetery, May 30, 1987. #MemorialDay #MemAmp100

This is the way it should have been had not COVID-19, imported from Wuhan, China, upended American life. Today’s wreath-laying was done before a sparse group of American cabinet members and dignitaries, including the first lady, Melania Trump. 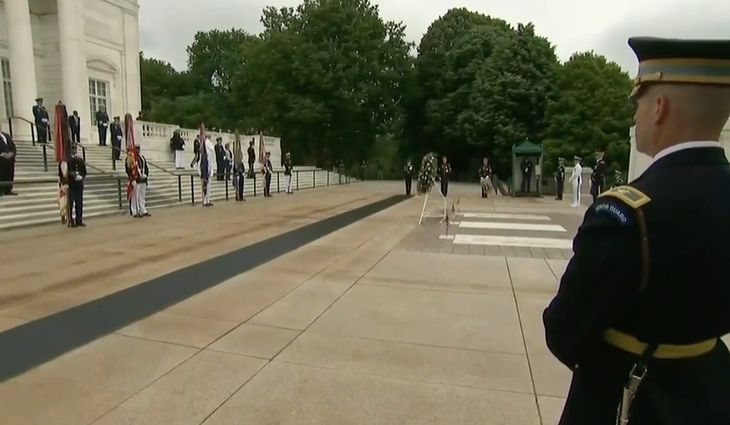 The Veterans Administration announced the new coronavirus rules just a few days ago. The Boy Scouts were banned from helping with flags-in at any national cemeteries this year due to COVID-19.

In years past, people could roam the grounds at Arlington, as these men did five years ago at Audie Murphy’s gravesite.

Five years ago: Spent poignant day in company of #3rdID #WWII vets (Dad’s outfit) — here w/#AudieMurphy’s gravestone at #Arlington — as they remembered their own 70 years after occupation of Salzburg and Bavaria post #VEDay. #RockoftheMarne #MemorialDay pic.twitter.com/nYlQ2Eiiwb

For Memorial Day 2020, President Trump issued a proclamation, which read in part:

Since the first shots fired in the Revolutionary War, Americans have answered the call to duty and given their lives in service to our Nation and its sacred founding ideals.  As we pay tribute to the lives and legacies of these patriots on Memorial Day, we also remember that they sacrificed to create a better, more peaceful future for our Nation and the world.  We recommit to realizing that vision, honoring the service of so many who have placed love of country above all else.

As Americans, we will always defend our freedom and our liberty.  When those principles are threatened, we will respond with uncompromising force and unparalleled vigor.  Generation after generation, our country’s finest have defended our Republic with honor and distinction.  Memorials, monuments, and rows of white crosses and stars in places close to home like Arlington, Virginia and Gettysburg, Pennsylvania, as well as far-flung battlefields in places like Flanders Field in Belgium and Busan in Korea, will forever memorialize their heroic actions, standing as solemn testaments to the price of freedom.  We will never take for granted the blood shed by these gallant men and women, as we are forever indebted to them and their families.

This year marks the 75th anniversary of the Allied victories over Nazi Germany and Imperial Japan in World War II.  As we commemorate these seminal events, we also remember the tremendous cost at which these victories came.  More than 400,000 souls of the Greatest Generation perished during this titanic struggle to liberate the world from tyranny.  In his address to the Nation on Japan’s surrender, President Truman’s words remind us all of our enduring obligation to these patriots for their sacrifice:  “It is our responsibility — ours the living — to see to it that this victory shall be a monument worthy of the dead who died to win it.”  As we pause to recall the lives lost from the ranks of our Armed Forces, we remain eternally grateful for the path they paved toward a world made freer from oppression.

President Trump did not mention of COVID-19.