On Friday, Project Veritas released another video exposing antifa tactics, this time highlighting what the undercover journalists described as a “Fight Club training session” at New York City’s RefuseFa. “RefuseFa” is short for “refuse fascism,” and it follows in the vein of antifa instigators across the country. Protests over the heinous police killing of George Floyd have devolved into riots that destroy black lives, black livelihoods, and black monuments, likely at the instigation of such groups. Rioters have hit the Big Apple particularly hard.

In the video, an instructor tells antifa instigators to try to “cripple” their opponents. While he appears to insist that the violence is mostly meant to distract someone so antifa can get away, he adds, “or really put a beating on them after that if you really don’t like the person.”

“If you get a good liver or kidney shot, it’s pretty much crippling them. They’re going to be doubled over and in a lot of pain. If you break one of the floating ribs, which are small and right down here. Those are also very painful, it’s hard to move after that, it’s hard to catch a breath,” the instructor says. “So one good body shot could potentially give you all the time in the world to run away while they’re doubled over in pain, or really put a beating on them after that if you really don’t like the person.”

Another instructor expands on the idea of “self-defense” to essentially define a piece of public property as antifa members’ personal property.

“We just kind of want to, in this space, reframe the idea of self-defense as not simply, you’re being acted upon by an aggressor. But it’s kind of a decision you make to fight back. In a lot of ways to say, I am human and I occupy this space and I will not be f*cked with,” he says.

RefuseFa hosted many training sessions to prepare antifa members for violence on the streets.

“We call this a safe space to practice aggression. Not aggression against one another, but really just a space that, if you want to or if you really want to challenge yourself, to that kind of work on harnessing that kind of energy,” one instructor says in the video.

Training topics included defense against blunt objects, such as police batons, ways to escape a chokehold, and strategies for pulling off a chokehold.

Self-defense training sessions often include this kind of advice, but antifa appears to use it aggressively. In discussing a chokehold, an antifa instructor says, “You’re trying to basically cut off both, both arteries. You know, squeeze.”

This video is the second in a series exposing antifa violence that Project Veritas is releasing. PJ Media’s Megan Fox reported on the first video on Thursday.

Portland antifa instigators have left victims with permanent scars. Journalist Andy Ngo has been hospitalized after receiving a beating. Local conservative Adam Kelly had his head busted open with a baton. He suffered a concussion and needed 25 stables to close the wounds. Gage Halupowski, an antifa agitator, pled guilty to second-degree assault and was sentenced to 70 months in prison for the violence. 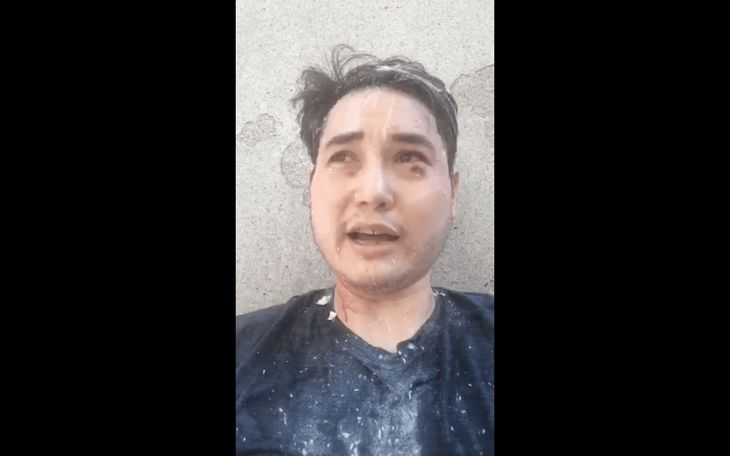 Twitter screenshot of Andy Ngo beat up by antifa.

Last July, 69-year-old Willem Van Spronsen threw “incendiary devices” at an Immigration and Customs Enforcement (ICE) detention center in Tacoma, Washington. Police killed him, but not before he ignited a car and tried to get a propane tank to explode, ironically endangering the lives of the very immigrants he intended to help. “I am antifa,” Van Spronson said in his manifesto. The group Seattle Antifascist Action hailed this terrorist as a “martyr.”

“When our good friend and comrade Willem Van Spronsen took a stand against the fascist detention center in Tacoma, he became a martyr who gave his life to the struggle against fascism,” the antifa group posted on Facebook.

President Trump has announced that the U.S. will designate antifa a domestic terrorist group. While it remains to be seen how this will extend to the various forms of antifa instigators, this declaration seems long overdue.