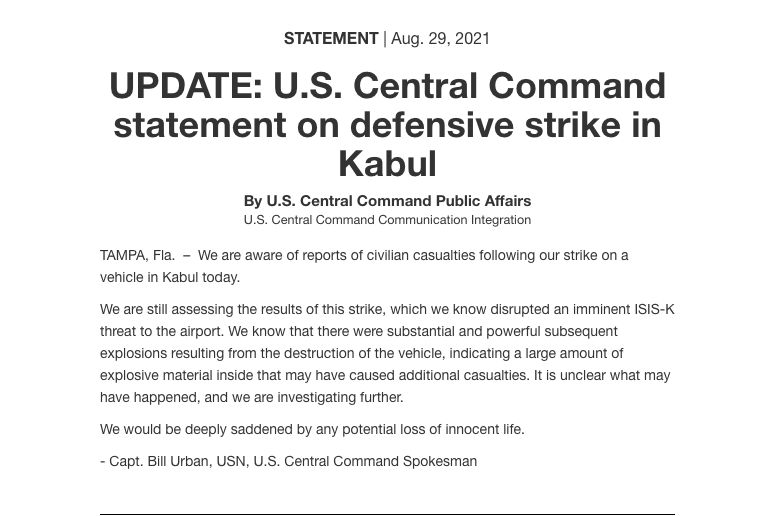 Fox News’s Jennifer Griffin reported that U.S. officials confirmed that two suicide bombers in an explosive-laden vehicle were targeted by a U.S. drone strike. The strike hit the target about three kilometers from HKIA. The CENTCOM statement suggests that these explosives may have been responsible for collateral damage. This morning, CNN’s Clarissa Ward reported that at least nine members of a family, including six children, are dead, likely due to the secondary explosions. This video appears to catch the secondary blast:

JUST IN – Explosion rocks #Kabul. The blast hit a residential building west of the airport. Cause unclear.pic.twitter.com/vzh7T651KM

Following this U.S. strike, unspecified terrorists fired five rockets at HKAI on Sunday. ABC reported that the airport remained operational, and flights continued. From the ground this morning, Ward said the C-RAM defense system mitigated the force of the rockets launched at the airport. The evacuation process is also slowing as the U.S. winds down operations at HKAI. Following the U.S. drone strike inside the city and resultant civilian casualties, there’s been a heightened risk to troops and evacuees from retaliation.

Related: VIDEO: Guess What Joe Biden Does When He Gets a Question About Afghanistan

Ward reports being in touch with several Americans still in Afghanistan who are unable to access the airport. She talked to one family from Houston that the Taliban have repeatedly stopped from proceeding to the airport. They are in Afghanistan visiting family. For all the State Department warnings, it is curious that civilians were even allowed to fly into Afghanistan with an imminent military withdrawal. Last week, reports of several stranded families from California also surfaced.

When the anchors asked Ward what leverage the U.S. might have to influence the Taliban to assist in the remaining evacuations, she said money. She said the Taliban desperately needs international aid to govern the country. She reports long lines outside banks in Kabul, rising prices, and concern about a lack of hard currency. Her assessment is that the U.S. can hold international aid over the Taliban’s head. It is a quasi-hostage situation if this is the primary leverage the U.S. has left and is willing to use.

There are emerging reports that the Taliban is collapsing the perimeter around the airport, coming closer in proximity to U.S. forces still on the ground.

Ward reports that no one seems to have a concrete idea of the actual number of Americans, green card holders, and SIVs left in the country. Other nations may be in a similar predicament as dozens of countries, including the U.S., issued a joint statement regarding continuing evacuations after the August 31 deadline:

We are all committed to ensuring that our citizens, nationals and residents, employees, Afghans who have worked with us and those who are at risk can continue to travel freely to destinations outside Afghanistan.  We have received assurances from the Taliban that all foreign nationals and any Afghan citizen with travel authorization from our countries will be allowed to proceed in a safe and orderly manner to points of departure and travel outside the country.  We will continue issuing travel documentation to designated Afghans, and we have the clear expectation of and commitment from the Taliban that they can travel to our respective countries.  We note the public statements of the Taliban confirming this understanding.

Ward reports that SIVs and other Afghans who worked with the U.S. and coalition forces are concerned about a purge. Even if the U.S. secures assurances that American citizens and Afghan allies can leave, many are not convinced. Taliban-aligned Afghans told Ward that if individuals worked with the “invaders” and “occupiers,” the Taliban must punish them.

Related: Afghan Evacuated by US Detained for Potential ISIS Ties, Up to 100 Others Could Be on Watch Lists

Their interpretation of Islamic jurisprudence does not match the Taliban leadership’s public statements. This dichotomy is not surprising if you understand the Persian concept of ketman. Like taqiyya, it is the concealment of the truth in certain circumstances to gain favor or mislead. The Taliban will tell the West what they believe it wants to hear until some point in the future when their actions portray their real intentions. Perhaps after the pallets of cash are delivered.

Americans, green card holders, SIVs are fighting to get out of Afghanistan before tomorrow’s deadline.

"People are very fearful of some kind of a purge or a blood letting after America leaves, especially with people who worked for the US Military," @clarissaward reports pic.twitter.com/LiBWcgf8Gl