Will the Pandemic Break the Government School Monopoly? Data Says Homeschooling Is Skyrocketing

Homeschooling rates increased significantly in the fall of 2020, according to a Household Pulse Survey from the Census Bureau. Previous estimates had shown that parents had selected this option at increasing rates between 1999 and 2012, when homeschooling plateaued and remained steady at about 3.3% of children. The pandemic, school closures nationwide, and some parents seeing the racialized and sexualized classroom curricula have changed this statistic significantly.

According to the Census Bureau:

In the first week (April 23-May 5) of Phase 1 of the Household Pulse Survey, about 5.4% of U.S. households with school-aged children reported homeschooling .

By fall, 11.1% of households with school-age children reported homeschooling (Sept. 30-Oct. 12). A clarification was added to the school enrollment question to make sure households were reporting true homeschooling rather than virtual learning through a public or private school.

That change represents an increase of 5.6 percentage points and a doubling of U.S. households that were homeschooling at the start of the 2020-2021 school year compared to the prior year.

While the Census Bureau found an increase across all racial groups, it saw the most significant increase in households that identified as black or African American by a factor of five. 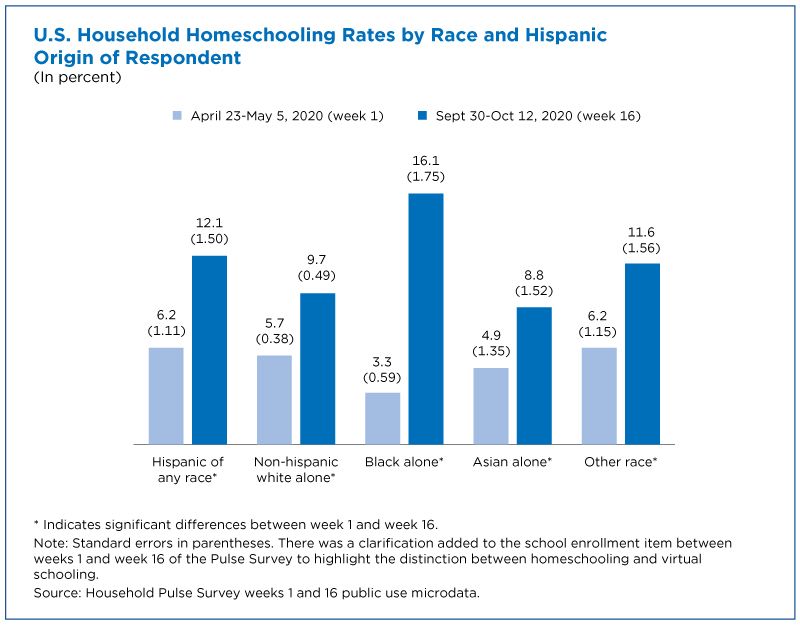 Across the nation, 28 out of 50 states had an increase in homeschooling that was statistically significant, and so did eight of the largest metropolitan statistical areas. States with the most significant increases varied between open ones, like Florida with a 13.1% increase, and those with longer lockdowns, like Massachusetts, at 10.6%. The large metros that saw increases usually suffered the longest lockdowns, such as Detroit, Michigan, and the greater New York area.

As schools resume, it is not clear how many parents intend to continue homeschooling. According to Education Week in November, parents showing an interest in public school alternatives has increased:

Homeschooling in response to the pandemic is driving enrollment declines in schools and districts across the country, according to a majority of principals and superintendents surveyed by the EdWeek Research Center. Fifty-eight percent in a mid-October survey listed home schooling as being a major contributor to enrollment declines caused by COVID-19—more than any other single reason, such as losing students to charter schools, private schools, or “pandemic pods” in which families band together to hire instructors who teach their children at home.

In North Carolina, notices of intent to homeschool tripled during the enrollment period. In Wisconsin, they nearly doubled. There was also a marked decline of 15-20% in parents opting to enroll their children in kindergarten in one Wisconsin school district. At least one professor believes the pandemic will cause a lasting increase in the number of parents who choose to homeschool:

But for some districts, per-pupil declines, coupled with cutbacks from the economic slowdown caused by the pandemic, may be a “double whammy” for their finances, said Christopher Lubienski, a professor of education policy at Indiana University.

Lubienski, who studies homeschooling, said the pandemic could give a long-lasting boost to the movement. While he believes many families that opted to home school this year will eventually return to public school, he thinks the United States will see a permanent increase in the number of homeschoolers even after the pandemic ends.

That’s “partly because people who haven’t really thought about it before suddenly saw themselves forced into [home schooling], and then realizing that it’s something they can see themselves doing,” he said.

Contrary to what you may think, parents with less income and education were more likely to say they were homeschooling:

According to Education Week’s survey, which was conducted at the beginning of the academic year, the less education and income parents had, the more likely they were to say they were homeschooling this year. Twelve percent of parents whose highest level of education is less than a bachelor’s degree said they are homeschooling their children at least some of the time this school year, compared to 5 percent of those with a bachelor’s degree or more.

Individual parents interviewed cited the increased time for interest-based learning in the homeschool environment and more control over who their children socialize with when they connect with other homeschooling parents. With the increase in remote work that is likely to accompany the end of the pandemic, parents may find they can balance working virtually with engaging in a homeschool curriculum. If parents keep moving toward homeschooling, city and state leaders who kept schools closed, and teachers’ unions who made ridiculous and never-ending demands, have no one to blame but themselves for playing politics with the pandemic.

While the press likes to portray women as victims of the pandemic because workforce participation has dropped to 57%, its lowest since 1988, employers may need to take another look. At least two out of five considered leaving or downsizing their career during COVID-19. Many noted that while working remotely, their children came first. Perhaps some of them noticed how much their presence during the day benefits their children. While some may like to return to flexible or project-based work, it would not be surprising to find some do not return at all because they choose not to.