“Defund the Police” is painted on a street near the White House. It is the only petition on the Black Lives Matter website. Every Democrat politician, including Joe Biden, has been asked to declare a position on the matter and what exactly it means in media appearances. It has been redefined, twisted and danced around for days.

Now the buzzword is “reimagining.” That is the process by which loony leftist city councils and others plan to reduce, restrict and in some cases eliminate police departments. Well, Democrat nominee Joe Biden appears to be imagining something very different.

In an op-ed for USA Today he presented a plan to increase federal funding to police departments throughout the nation by $300 million. Amid a whole host of really bad ideas such as criminalizing 911 calls based on assumed intent and a return to the disastrous home-lending policies that helped create the housing bubble, he also specifically rejects the idea of defunding police departments.

I imagine this means a return to the use of Department of Justice investigations and consent decrees. They were used often during the Obama administration with questionable results on police morale and productivity.

This, along with negative media and derogatory comments from politicians, is described in the Ferguson effect. Following the anti-police riots related to a high-profile shooting in Ferguson, Missouri, police nationwide reported feeling less safe and less inclined to make stops. 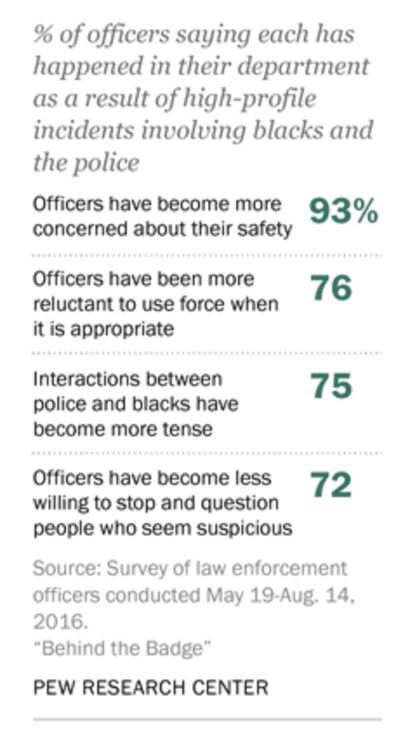 It will not be surprising to see morale and feelings of safety further deteriorate among police officers. Already, mass resignations have been reported in Buffalo and New York City.

Biden is also going to spend federal dollars to encourage police departments to do things they already do:

That’s why I’m proposing an additional $300 million to reinvigorate community policing in our country. Every single police department should have the money it needs to institute real reforms like adopting a national use of force standard, buying body cameras and recruiting more diverse police officers.

There has been a 63% decline in candidates for officer positions. It is doubtful that number will improve anytime soon, making diversity requirements difficult. Public services like law enforcement also already have some of the most aggressive affirmative-action policies in the employment sector. A recent report shows that blacks currently make up 13.3% of police officers in the country, similar to their representation in the population.

Cameras don’t really change police behavior according to one large-scale study and as of 2017, 95% of large departments reported using them. Community policing programs are also in 81% percent of law enforcement agencies as of 2017. Not all agencies, such as state patrol and other specialty agencies, are using them.

Finally, Biden has the same ridiculous idea about sending someone other than a police officer to certain types of calls.

And we need to prevent 911 calls in scenarios where police should not be our first responders. That means making serious investments in mental health services, drug treatment and prevention programs, and services for people experiencing homelessness. That may also mean having social service providers respond to calls with police officers.

There are already calls where social service providers respond with police and vice-versa. Child Protective Services and officers show up together. Not sure who individuals are supposed to call other than 911 when an emotionally disturbed person is in the neighborhood.

As someone who was a community healthcare provider I have been spit on, shoved, menaced and was once tossed over a bed dealing with domestic situations and people with mental health issues. I called, you guessed it, the police.

Of course, Biden’s main thrust is that only he can heal the nation because President Trump is a terrible, awful, racist. That’s weird. Despite current events, a Gallup poll in January 2020 showed that America’s satisfaction with race relations and the position of minorities had improved by 14 and 9 points respectively since January of 2017.

Weird. I am almost sure that Joe Biden and the nation’s first black president left office in January 2017.

Joe Biden is not alone. According to the Associated Press, the president of the NAACP failed to endorse the idea as well.

NAACP President Derrick Johnson, in an interview, also declined to endorse calls to defund the police.

“I support the energy behind it. I don’t know what that substantively means. As I’m talking to people about the concept, I’ve gotten three different explanations,” said Johnson, who has criticized Trump. “We know there has to be a change in the culture of policing in this country.”

Democrats generally are punting on the issue and even Representative Alexandria Ocasio-Cortez has moderated her tone.

It is looking more and more like “Defund the Police” is going nowhere fast.