This is one of those Riot Week stories that it is perfectly acceptable to have mixed feelings about, although I’m leaning on the side of the police here, for a few reasons. It begins with the suspension of two members of the Buffalo Police Dept. Emergency Response Team.

Prosecutors are investigating the actions of two Buffalo police officers who were suspended without pay on Thursday night after a video showed them shoving a 75-year-old protester, who was hospitalized with a head injury.

The video taken by WBFO, a local radio station, shows the man, identified on Friday as Martin Gugino, approaching a group of officers during a protest stemming from the death of George Floyd. He was identified by the Western New York Peace Center, a nonprofit that named him in a Facebook post, saying he is a peace activist and a member.

After the video shows Mr. Gugino stopping in front of the officers to talk, an officer yells “push him back” three times; one officer pushes his arm into Mr. Gugino’s chest, while another extends his baton toward him with both hands. Mr. Gugino flails backward, landing just out of range of the camera, with blood immediately leaking from his right ear.

It was an ugly scene, to be sure and — sadly — just one of thousands of ugly scenes from the past week.

To say that police all over the United States are beleaguered after the past ten days would be a bit of an understatement. They’re being blamed for all of the country’s racial ills while being sent out amid civil unrest — ok riots — while bureaucrats hamstring them and don’t let them do their jobs. 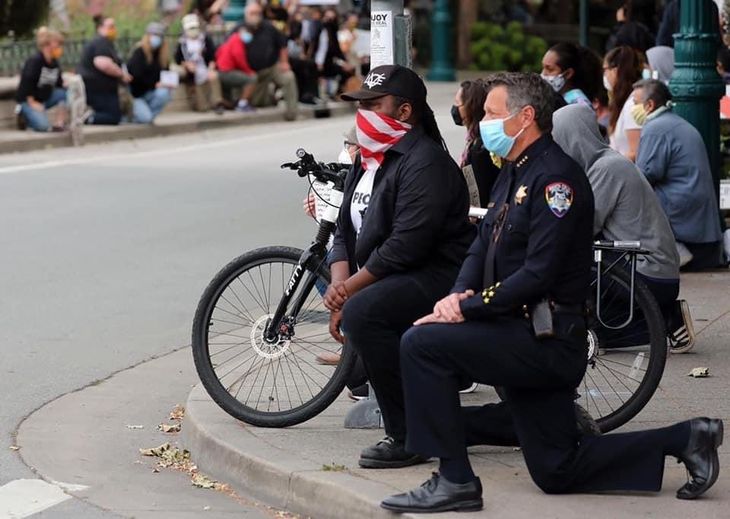 Tensions between the Ivory Tower elected officials and rank-and-file law enforcement are growing every day. Earlier this week, Louisville police walked out on the city’s Democratic mayor as he was getting ready to address them during roll call. The cops feel “completely unsupported and disrespected” by the mayor and his administration, the article states.

The post also details some of what the officers have been enduring during the riots:

At recent demonstrations, Louisville police have deployed pepper bullets and tear gas to disperse protesters, who they say have hurled bricks, fireworks — and even jars filled with gasoline, urine and vomit — at them, the paper reported.

There are some dynamics in play here that may seem heartless and clinical for me to discuss but are valid nonetheless.

I have a fair amount of experience dealing with the police from both sides of the law. I was a rather out-of-control young man and had occasional, um, encounters with law enforcement. Love cops or hate them, there are some fairly simple rules to follow if you don’t want trouble with them. One is don’t walk right up to them and get in their faces.

Once you’re within arm’s reach of a police officer’s sidearm the tensions go up a bit. I’m not saying that this guy bum-rushed these cops but he didn’t exactly observe social-distancing protocols (remember those?) and attempt to have a nice conversation.

I don’t like seeing anyone get hurt and I’m not a big fan of an egregious use of force. Still, I’m old enough to know not to impede the progress of the riot squad as it’s attempting to do its job. And I’m younger than 75.

The growing chasm between the bureaucrats and police manifested itself in a big way on Friday:

More from The Hill:

The entire Buffalo Police Department Emergency Response Team has resigned after the department suspended two officers without pay when a video surfaced showing them pushing over a 75-year-old protester.

“Fifty-seven resigned in disgust because of the treatment of two of their members, who were simply executing orders,” Evans told a local NBC affiliate.

WIVB.com reports that the officers are still employed by the police department, they’re just not on the Emergency Response Team now. So Buffalo is without a riot squad while there may very well be more riots.

The animosity between Democratic officials and police is only going to get worse, even if the riots are done. The lunatic leftists who run Minneapolis have actually floated the idea of eliminating the police department and replacing it with some hippie commie nonsense.

Our institutions aren’t completely breaking down yet, just in Democratic hellholes. For the moment, there’s still a constitutional fix for that.