Austin, Texas, likes its weird vibe and wants to keep it that way. Often described as a colorful relatively liberal city, it is also very welcoming, pretty safe and laid back. It was not surprising that residents of the city would join protests against police brutality related the death of George Floyd.

Luckily local police and local media ferreted out some groups trying to turn events in memory of Mr. Floyd and a local resident, Mike Ramos, who was shot by police, from peaceful protests into something much darker. At one point, a black officer was attacked by agitators in a park.

Consistent with what the police have found, they appear to come from a leftward leaning group. One thug is wearing a shirt with Che Guevara. Certainly not the hero of most of the morons in the white identitarian movement. 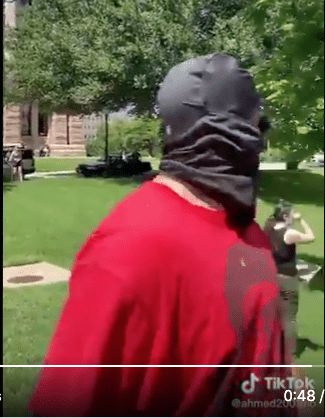 According to KXAN, the NBC affiliate in Austin, antifa-like groups have made their presence known. The groups were clearly anti-police and turned violent on May 31, the same night rioters injured dozens of federal officers in Washington, D.C., and set a fire in St. John’s church. From on-the-scene reporting:

Around 10 p.m. Sunday night, a crowd of more than 100 people left the Texas Capitol and headed back to the Austin Police Department’s headquarters. They were met with a wall of officers guarding the front doors of headquarters.

Then, shots rang out from the wall of officers and streams of pepper spray rained down on the protesters from the Interstate 35 overpass. Officers said someone from the crowd threw something and officers fired “non-lethal” rounds from orange-colored 12-gauge shotguns from the steps of headquarters.

Soon after, we watched people spray painting buildings around the police department and a group of people were lobbing rocks, water bottles and fireworks toward officers in riot gear. A gas station and liquor store were looted during the exchange.

The protests resulted in anti-police graffiti all over the bricks outside. A global security professional, Ben West from Stratfor, said the group’s actions indicated they subscribed to what he calls an antifa ideology. He described the group as loosely knit with no national organization structure.

“They try to portray themselves as the good guys, fighting fascism and fighting police violence, obviously all things people look at say oh, yeah…we should all fight fascism and not tolerate police violence, but obviously ANTIFA is associated with more violent tactics, property damage even attacks on individuals,” West told KXAN.

West says his firm has been tracking the activities of these groups or cells. It is the autonomous cell structure that is likely the reason most individuals that have been arrested are from the local area. However, given the nationwide destruction and violence, it would appear the individual cells have some methods of communicating and coordinating with one another.

Another event was actually canceled because the organizers were given a heads up that agitators planned to attend. Again, according to KXAN, a young woman attended a Facebook event sent to her by a friend and recorded the following statement from the organizers:

Mike Ramos is a man who was shot and killed by Austin police in April. His mother was expected to make the keynote speech at an event being organized by the Austin Justice Coalition. The event was canceled an hour before it started because organizers got wind of the extremist group.

Not to be deterred, the Mike Ramos Brigade then scheduled an event at a local Target store. However, by the time officers arrived, the store had already been looted.

The idea people are using her son’s name to take extreme action is upsetting to Ramos’ mother.

“I was really disappointed. It made me angry what they were doing. I’m not about violence and stuff like that,” Ramos said as she sat under the shade of a large pecan tree behind her home on Wednesday. ‘I feel hurt because they’re using my son’s name and that makes me angry,” she said.

Texas Department of Public Safety Director Steve McCraw said the looting was done by violent extremists. They have been tracking these groups online and even said they have agents embedded trying to identify criminals.

“We’ve got a long memory and we’ve recorded evidence and we’ll continue to investigate each and every event to identify those individuals who were involved in criminal conduct and make the appropriate arrests based on probable cause and getting prosecution,” McCraw said.

For as many times as the media try to frame events or create a narrative, this local station did a great job of explaining what is going on in the local community. Factual and balanced, they even included comments from a self-identified member of antifa who contacted them. The reporting was through and informative.