Report: Top 100 Most Dangerous Cities in the U.S.

NeighborhoodScout, a web-based platform that, among other things, tracks crime statistics, released its annual list of the Top 100 Most Dangerous Cities in the U.S. for 2018.

According to a press release, the list is based on a comparison of the safety of cities with 25,000 or more people nationwide, “based on the number of violent crimes (murder, rape, armed robbery, and aggravated assault) reported to the FBI to have occurred in each city, and the population of each city, divided by 1,000.” The calculation reveals the rate of violent crimes per 1,000 residents.

The most dangerous city in American, according to the report, is Monroe, Louisiana, followed by Bessemer, Ala., and East St. Louis, Illinois. Rounding out the top ten are Camden, N.J., Detroit, Mich., St. Louis, Mo., Wilmington, Del., Alexandria, La., Memphis, Tenn., and W. Memphis, Ark.

NeighborhoodScout’s study is based on the FBI’s most recent “Final, Non-Preliminary” data. Because there is a lag in FBI reporting, the 2018 list is based on the 2016 data that was released in September 2017. “The 2017 year total crime data is not complete,” the report notes. “The FBI is still working through data issues and reporting issues before that data can be considered Final, and Non-Preliminary.”

“Preliminary statistics show declines in the number of both violent crimes and property crimes reported for the first half of 2017 when compared with the first half of 2016,” according to the FBI report. “The report includes data from more than 13,000 law enforcement agencies nationwide that submitted crime data to the FBI’s Uniform Crime Reporting (UCR) Program.”

According to the FBI, overall violent crime in the U.S. “decreased 0.8 percent in the first six months of 2017 compared with the same time frame in 2016, though the number of murders and non-negligent manslaughters reported increased by 1.5 percent. Additionally, the number of rapes (revised definition) decreased 2.4 percent, robberies decreased 2.2 percent, and aggravated assaults were down 0.1 percent.”

Overall property crime dropped 2.9 percent in the first half of 2017 as did burglaries (6.1 percent), and larceny-thefts (3 percent). Motor vehicle thefts increased 4.1 percent, however.

Monroe, La., according to the report, is representative of several of the communities on the list: “It is a medium-sized city (population: 49,297) located around 100 miles away from two larger cities (Shreveport, LA, population 194,920 to the west, and Jackson, MS, population 169,148 to the east).”

“Compared to the rest of the nation,” the report continued, “Monroe is lower middle income and has one of the higher rates of people living in poverty.” It also has an above-average housing vacancy rate and a lower public school quality, resulting in an inability to attract high-paying jobs and retained skilled workers.

Compare that to Cincinnati, the safest city on the list, with 61.53 crimes per 1,000 residents. Your chances of becoming a victim in Cincy are also significantly lower (1 in 110) as well as in Ohio overall (1 in 333).

Michigan topped the list of states that have the highest number of dangerous cities with nine. That was followed by Florida (8), California (7), Massachusetts and Ohio (tie, 6), and Illinois and Lousiana (tie, 5). 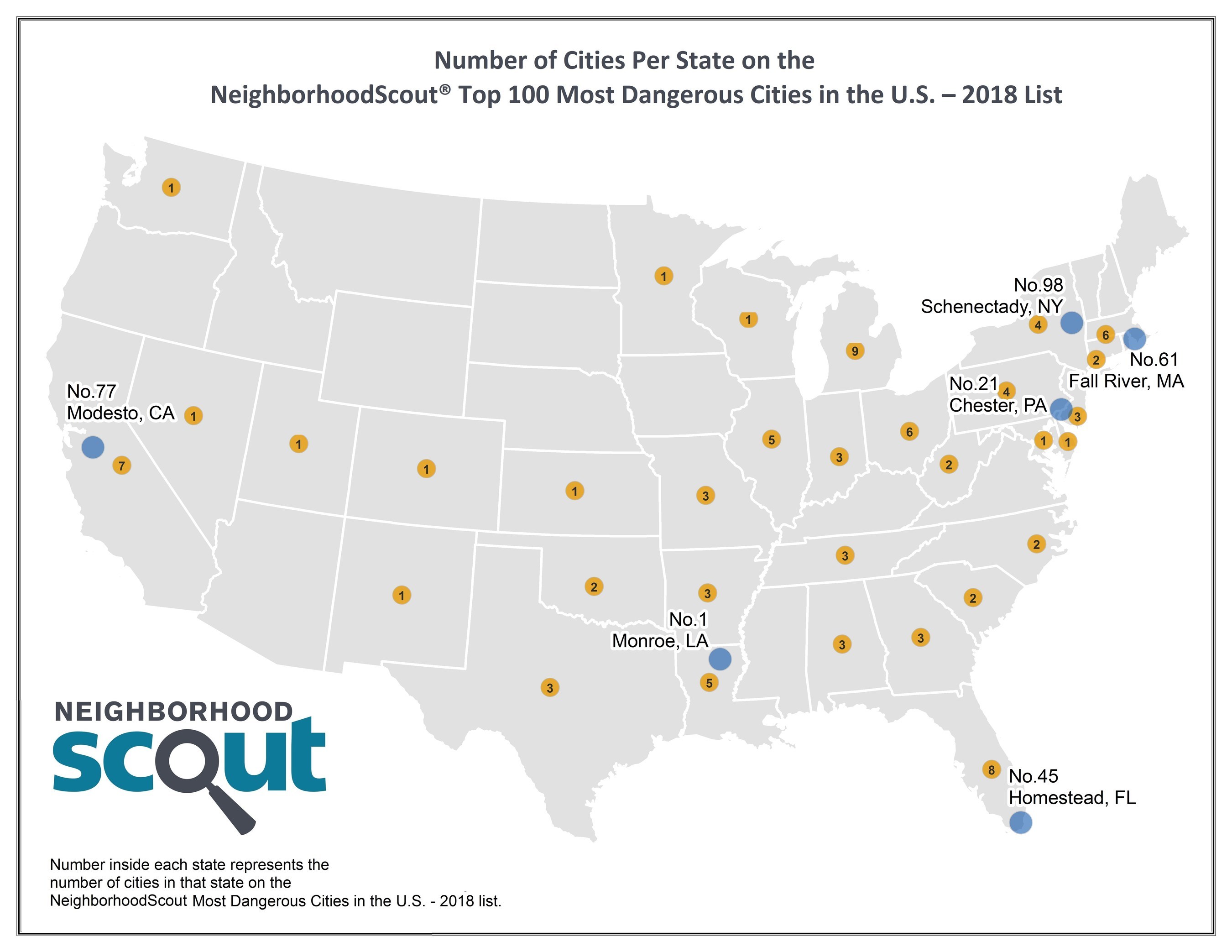 Missing from the list is Chicago, which has seen an unprecedented number of murders in recent years. The city’s residents experienced 650 homicides in 2017, down 16 percent from 2016, but still significantly high. Someone is shot in Chicago every two hours on average, and a person is murdered every 12:59 minutes, according to one report. However, because of Chicago’s high population density, the chances of becoming a crime victim are lower than in other, less populous cities.