White-Collar Elitist Tries to Lord It Over a Blue-Collar Worker. It Doesn't End Well for Him.

Most people in flyover country understand that America only works the way it does on a basic infrastructure level because of the back-breaking work of blue-collar skilled labor. This is something that’s universally true, but for some reason the ivory tower people who have never had grease under their fingernails and hold more degrees than they know what to do with can’t seem to understand it.

This was illustrated perfectly on Twitter this week by Adam Lake MD (they always have to put their titles in their handles) when he posted this tone-deaf complaint about the guys who showed up to help him fix stuff he can’t.

“Just had some folks come to do some home maintenance things and I asked them to wear masks inside our home. They said ‘that’s not our policy and if you don’t like it, we can leave.’ So they left. Seriously?”

Just had some folks come to do some home maintenance things and I asked them to wear masks inside our home. They said “that’s not our policy and if you don’t like it, we can leave.” So they left.
Seriously?

Well, yes, Adam. That’s how the free market works. A person offers a service but also has the right to refuse that service for any reason. This is no different than a restaurant requiring masks and a patron deciding to go elsewhere. That’s the risk you take when you decide to be everybody’s nanny.

But the deeper problem here is that fussy doctors like Adam Lake “MD” have spent so much time in their upper-class world with their expensive various therapists, posh workout facilities, $6 lattes, and Whole Foods organic whatever that they truly think that the people who run those places just exist to serve them, and as long as they throw money their way they are required to perform whatever menial task the upper class wants.

That’s not the way the world actually works. Money is a system set up to avoid force. One could argue that the concept has been bastardized by the greedy exploiters (Amazon, Google, etc.) but the basic idea of what our monetary system is supposed to be is described perfectly by Ayn Rand in Atlas Shrugged. [Emphasis mine.]

To trade by means of money is the code of the men of good will. Money rests on the axiom that every man is the owner of his mind and his effort. Money allows no power to prescribe the value of your effort except the voluntary choice of the man who is willing to trade you his effort in return. Money permits you to obtain for your goods and your labor that which they are worth to the men who buy them, but no more. Money permits no deals except those to mutual benefit by the unforced judgment of the traders. Money demands of you the recognition that men must work for their own benefit, not for their own injury, for their gain, not their loss–the recognition that they are not beasts of burden, born to carry the weight of your misery–that you must offer them values, not wounds–that the common bond among men is not the exchange of suffering, but the exchange of goods.

What “Doctor” Lake fails to understand is that his money is only valuable to a person willing to take it. By requiring the little people to cover their faces in his home, Lake has ensured that a certain percentage of the workers being asked to do this won’t comply and will refuse to offer their skills in exchange for their injury and loss. Blue-collar workers are not oxen to be forced and beaten into submission. If you want your toilets to work, you should treat them better. The cost required to meet Lake’s demand wasn’t worth it to the chimney sweep who came to his door and so he left, and rightly so.

The more the working class simply refuses to be used like “beasts of burden,” the better off we will all be. Just tell these people trying to micromanage your very existence “No deal,” and watch them struggle to find someone to fix the HVAC or snake a drain. Perhaps they should have paid attention in shop class.

It would behoove the wealthy whiners out there to know that skilled labor is in high demand and getting higher every day due to every suburban parent sending kids to college for useless liberal arts degrees instead of encouraging their kids into high-paying trades. That means that the skilled labor workers have the option to choose who they will help and who they won’t. I would suggest being nicer and not pushing your mask fetish on the guys who know how to stop a leaking pipe. The only thing that would have made this story better is if the chimney sweep had charged the doctor a missed appointment fee.

Let’s also not forget that the powers that be keep reminding the working class that they are literally the “mask class” while their betters can go maskless whenever they want. Case and point:

In the back you see all the “help” in masks while they strut around smiling with this on their butts. It’s quite the image. pic.twitter.com/0R3cOosntb

It was only a matter of time before some in the “mask class” stopped complying. Some of the comments on Lake’s tweet are worth reprinting and I would suggest clicking through to scroll around because it will brighten your day. 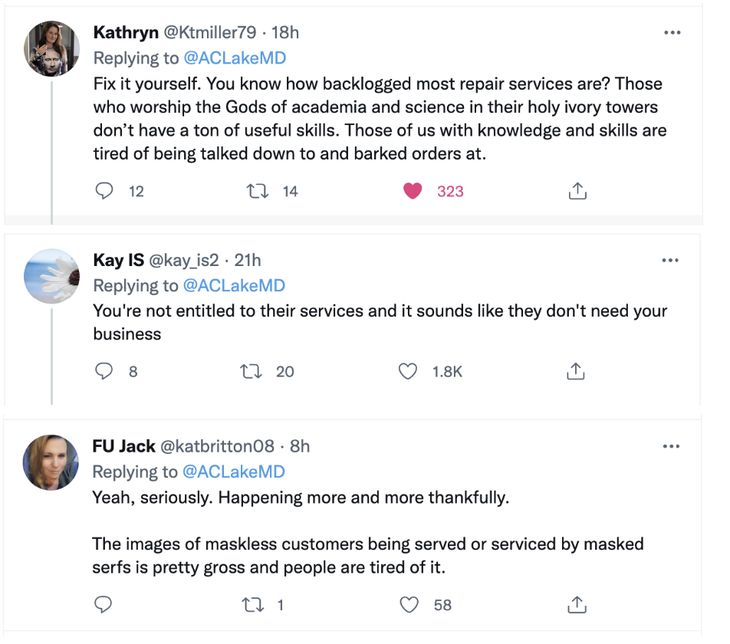 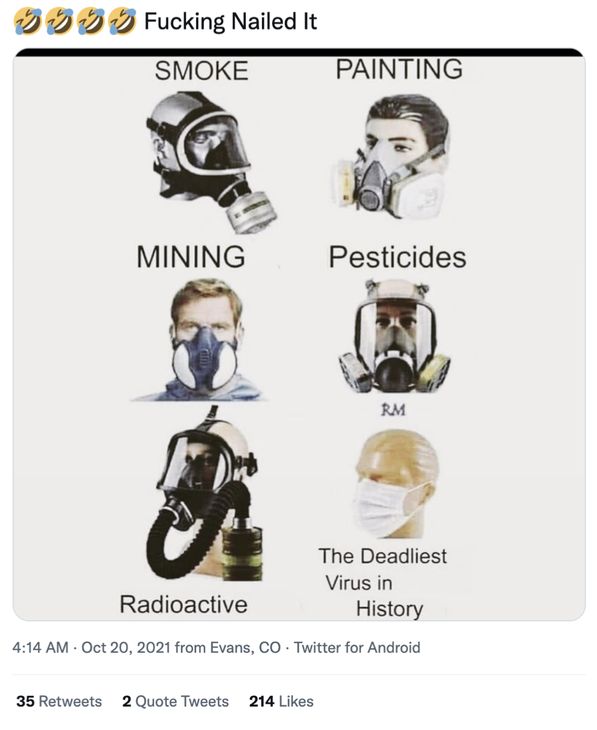