Gina Carano’s career is over at Disney. If you’re a pedophile you have a better chance of working for Disney than if you’ve ever indicated publicly that you might be conservative. That’s not an overstatement. Disney literally employs convicted pedophiles right now who are working on kids’ shows.

The film An Open Secret detailed many of these allegations years ago. The Open Secret Twitter feed continues to name names.

Served only 6 months in jail

Disney also has no problem with employees who joke about raping kids or killing Trump supporter’s children on Twitter.

James Gunn, director of Guardians of the Galaxy, was fired for making several “jokes” about raping kids — and then was quietly rehired.

Disney employs producer Jack Morrissey, who tweeted that MAGA kids should go into the wood chipper, and Disney did nothing.

That’s how much Disney cares about children pic.twitter.com/gIQ4z7ZEO2

But Gina Carano is out of a job as the iconic Cara Dune on The Mandalorian for posting her opinion that Cancel Culture mobs are doing to conservatives what Nazis did to the Jews before the Holocaust. Here’s her “reprehensible” post they are calling “anti-Semitic” that got her booted. 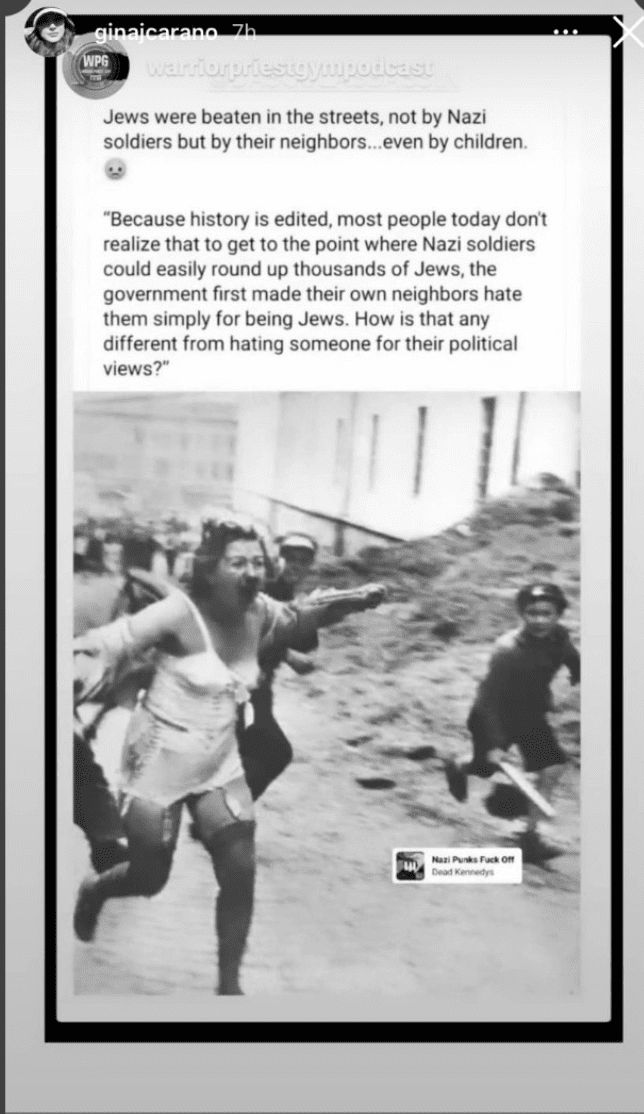 Fired for making a Hitler analogy? Wouldn’t that employment standard make all of us unemployed? https://t.co/89DSP7dzTh

There’s nothing anti-Semitic about that post. If anything it is a warning that it can happen again to another group of people if we aren’t paying attention. Libertarian and Jewish science-fiction author, Marina Fontaine, who escaped the Soviet Union with her family in 1987, spoke to PJ Media about Carano’s firing and imagery that she used that Disney and others are calling “anti-Semitic.”

Holocaust captures our imagination not only from the sheer number of the dead, but because it came from a highly civilized country. We say Never Again, and want to believe it can never happen here. So we focus on cattle cars and gas chambers, which are the iconic symbols, but forget that those came later.

It started slowly, the drip-drip-drip of propaganda combined with the steady separation of Jews from society. And people, good people would watch their neighbors banned from parks and stores or whatever, took it as proof that maybe they did do something to deserve it. And then propaganda turned to hysteria, the separation turned to dehumanizing, and the violence was the next logical step.

You could say “the Good Germans” didn’t see it coming. The rest of the civilized world was in denial because it never happened quite like that, with hate and mass murder coming strictly from propaganda, in such a civilized place, against people who posed no threat but were painted as monsters. We, here, now, have no excuse. We know how it starts, and how it ends, and silencing the people who point out the fundamental similarities will not take us off that course.

This sentiment was exactly Carano’s point. Accusing a person of being anti-Semitic for saying “Hey, the Nazi’s did this to Jews, let’s not do this again,” is crazy. But the left always takes conservatives out of context in order to harm them. Fontaine continued, “Any time a conservative mentions the Holocaust it’s somehow dishonoring the dead when it’s the opposite: It’s trying to make sure we don’t go that way again.”
We are living under a corporate tyranny run by Social Justice Warriors who are out for conservative blood. They don’t just want you unemployed, they want you to starve to death. They want you to never work again. The next step is purging you from existence. When the killing begins, don’t come to us complaining you didn’t see it coming.
A quick review of Nazi Germany leading up to the Holocaust shows us that they came for the actors and the culture first. Just because it was the Nazi government doing it and not the private companies like Disney doesn’t make it any less terrifying. Remember that this country has elected people who want to create “lists” of Trump supporters so they can blacklist them from public life. How is that different than what the Nazis did? (Spoiler: It isn’t.) Yadvashem.org has a very detailed history of what happened before the actual killing began in Germany under the Nazis.

Jewish actors were dismissed from theaters; Jewish authors’ works were rejected by publishers; and Jewish journalists were hard-pressed to find newspapers that would publish their writings.

If that doesn’t sound familiar, you’re not paying attention.

To the conservatives out there claiming that what Carano said was “inartful,” or “unwise,” you’re worse than the left. You’re on a losing team that wants to keep losing and it will be your fault when we and our children are rounded up and put in reeducation camps or whatever horrors the left has in mind for us—because you refused to fight this. I despise you. You’re dead to me. Your equivocation and cowardice will not save you from the fate that we’re all hurtling towards at 400 miles an hour.

Cancel Culture Claims Another Scalp at The New York Times