A Coronavirus Chart The Mainstream Media Doesn't Want You To See

“By any standard, no matter how you look at it, the U.S. is losing its war against the coronavirus,” claims Axios in a story published on Saturday.

It’s a bold claim, and according to Axios health care editor Sam Baker, the recent rise in cases is proof positive that America is losing the battle. “Seven times over the last two weeks, the U.S. has set a new record for the most cases in a single day,” he notes. “Cases are increasing in 33 states, and several of those states are seeing such staggering increases that they may soon overwhelm their hospitals.”

To illustrate his point, he included a graph with the article that points out that if all COVID-19 patients (confirmed cases) lived in one city, it would be the third-largest city in the United States.

Axios produced this laughable graph to demonstrate why we're "losing" the war on the coronavirus. pic.twitter.com/7jvaVU42ae

Wow, are you impressed? Well, you shouldn’t be. If Axios is basing its assessment on the war with the coronavirus on confirmed cases, then I wonder how Axios would respond to this chart: 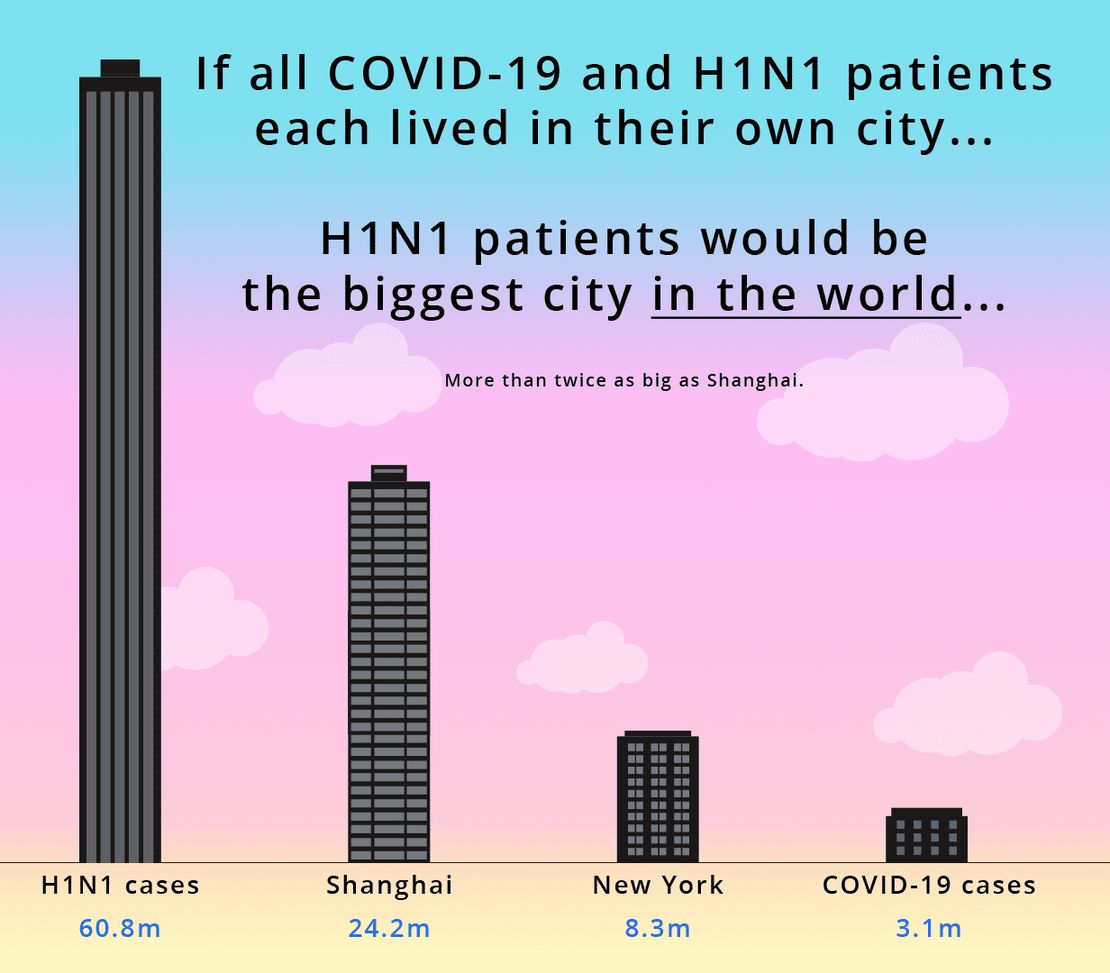 But, you know, we’re losing the war against the coronavirus.

Ron Klain, who was Biden’s chief of staff at the time of the H1N1 pandemic and is currently advising his campaign, says it was mere luck that H1N1 wasn’t more deadly. “It is purely a fortuity that this isn’t one of the great mass casualty events in American history,” Klain said of H1N1 in 2019. “It had nothing to do with us doing anything right. It just had to do with luck. If anyone thinks that this can’t happen again, they don’t have to go back to 1918, they just have to go back to 2009, 2010, and imagine a virus with a different lethality, and you can just do the math on that.”

Does Axios consider the United States to have lost the war on H1N1? I’m asking for a friend.

The war on H1N1 suffered significant setbacks because of the Obama-Biden administration’s failures, particularly when it came to vaccine shortages. The Obama-Biden administration had predicted in the summer of 2009 that they would have 160 million H1N1 vaccine doses by late October but ended up with fewer than 30 million. According to a study by Purdue University scholars, this failure cost lives because the H1N1 vaccine would arrive “too late to help most Americans who will be infected during this flu season.” The study determined that the CDC’s planned vaccination campaign would “likely not have a large effect on the total number of people ultimately infected by the pandemic H1N1 influenza virus.”

The coronavirus is more deadly and more infectious than H1N1, and containment and mitigation efforts have so far succeeded in preventing the widespread infection that we experienced with H1N1. One can only imagine how much worse the coronavirus pandemic would be had the Obama-Biden administration been handling it.

The coronavirus is not only magnitudes more deadly than H1N1, but also more infectious. According to a study from Emerging Infectious Diseases, COVID-19 has a median R0 value (a mathematical term for how contagious a disease is) of 5.7, while H1N1 had an R0 value between 1.4 and 1.6. So, COVID-19 is nearly 4 times more infectious and 13-20 times more deadly than H1N1. So, yes, Obama and Biden were, as Ron Klain put it, lucky.

Axios may not have existed during the 2009 H1N1 pandemic, but considering the media never held Obama accountable for botching the response to that pandemic, I think we can safely say that such a sentiment, that we were losing the war on the H1N1 pandemic, would have never been a narrative pursued by the media.

Barack Obama Lies About H1N1, Claims He Prevented It From Being a Pandemic

Did Obama Botch the Response to the H1N1 Outbreak? Here’s What the Media Isn’t Telling You

Matt Margolis is the author of Airborne: How The Liberal Media Weaponized The Coronavirus Against Donald Trump, and the bestselling book The Worst President in History: The Legacy of Barack Obama, and The Scandalous Presidency of Barack Obama. You can follow Matt on GETTR, Truth Social, Twitter, Facebook, MeWe, Gab, and Rumble. News tips, praise, hate mail, and media inquiries can be sent to [email protected].
Read more by Matt Margolis
Tags: PANDEMIC
SHOW COMMENTS