Last week we watched as half of the country screamed at Tim Scott for daring to say America isn’t a racist country. The libs seemed determined to prove Scott wrong, even if it meant being as racist as possible themselves. They called him “Uncle Tim,” among other less printable things. Jimmy Kimmel tried to whitesplain racism to him. Al Sharpton stood up at a funeral and insisted that America is indeed racist, which he wouldn’t be allowed to say if America actually was racist. Throwing out accusations of racism left and right is a very lucrative business, and the people who profit from it aren’t about to let Tim Scott take food off their tables. So, their longstanding rule against criticizing black politicians went out the window, and they hit Tim Scott with every racist epithet they had.

As disgusting as it is, apparently there is an acceptable limit to the Democrats’ racism, and one hapless Dem in Texas just hurtled right over it. Emma Colton, Washington Examiner:

“I am deeply and sincerely sorry for my inappropriate and hurtful use of racist term I used to describe Sen. Tim Scott on my personal Facebook page. It was insensitive, and I have embarrassed myself and my party by its use,” Lamar County Democratic Party Chairman Gary O’Connor told the Washington Examiner on Tuesday morning.

“As a result, I feel compelled to offer my resignation as chair of the Lamar County Democratic Party for consideration by the County Executive Committee,” he said.

Here’s what he said: 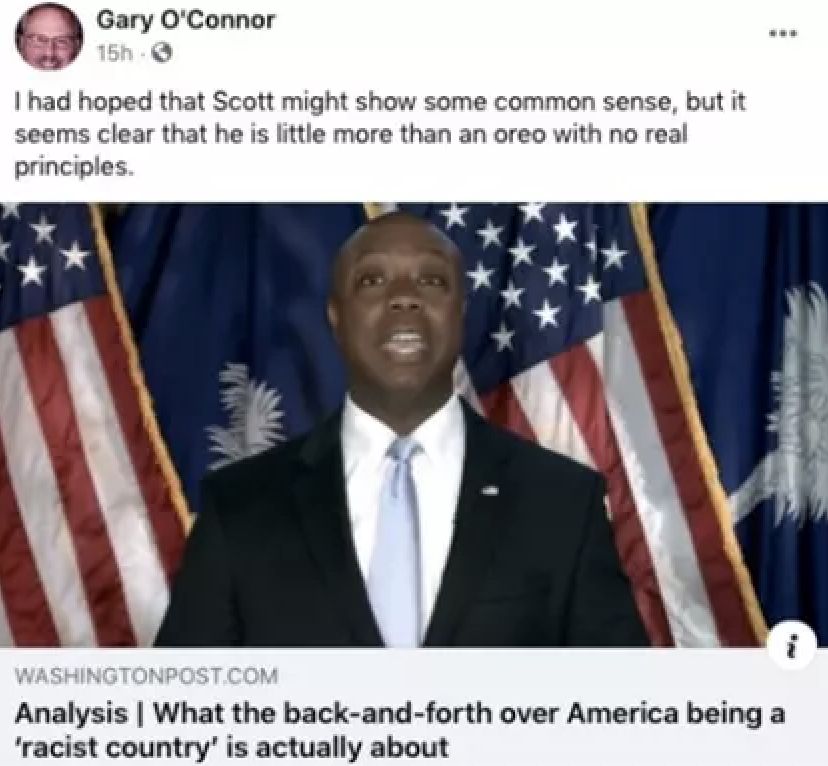 “I had hoped that Scott might show some common sense, but it seems clear that he is little more than an oreo with no real principles.”

In case you’re unfamiliar with the term, the slur “oreo” is used to insult someone for supposedly being black on the outside but white on the inside. (“Coconut” is used in a similar way.) Inherent in this insult is the idea that there’s only one way a black person can think and behave, and that all white people are alike, and other racist assumptions. It reduces a living, breathing person to a series of boxes to check off. It’s anti-human. It’s #bigotedAF.

And it’s even more baffling when a white guy like Gary O’Connor uses it. To him, an “oreo” is a black person who acts like a white person, which means the black person has no real principles. O’Connor is insulting himself as a white dude, and then projecting that insult onto a black dude who disagrees with him.

This is also known as “the Democratic Party base.”

Hey, I’ve got an idea. I know it’ll sound kinda crazy, but hear me out: Why don’t we judge a person by the content of his character, not the color of his skin? Why don’t we treat people like individuals, with individual thoughts and feelings, instead of making all sorts of assumptions about them based on the way they look? Why don’t we listen to what people say and try to judge it on the merits, rather than using gender or skin color or some other immutable personal characteristic to dismiss them outright? How about thinking, and then reacting?

Why don’t we stop prejudice by not prejudging people?

Tim Scott seems like a good man, for a politician. I don’t know that I trust him more than I trust anybody else in Washington, but when I disagree with him, it’s not because I don’t look like him.