Twitter Is Silencing Anybody Who Wants to Talk About Hunter Biden

As a libertarian, I respect Hunter Biden’s right to party. As a conservative (and occasionally a Republican sympathizer), I condemn the brazen corruption that pays for Hunter’s lavish, hedonistic lifestyle. So I took an interest in the New York Post‘s story on Wednesday about a laptop they claim to have obtained, allegedly once belonging to the younger Biden. The NYP claims the laptop contains evidence that Hunter profited from his father’s name, and may prove his father was part of it. I don’t know if any of that is true. It confirms my prejudices, but that doesn’t necessarily mean it’s accurate. What I do know is that the following part of the story, written by Emma-Jo Morris and Gabrielle Fonrouge, very much piqued my interest:

The computer was dropped off at a repair shop in Biden’s home state of Delaware in April 2019, according to the store’s owner.

Other material extracted from the computer includes a raunchy, 12-minute video that appears to show Hunter, who’s admitted struggling with addiction problems, smoking crack while engaged in a sex act with an unidentified woman, as well as numerous other sexually explicit images.

Please believe me when I tell you, Dear Reader, that I would definitely watch that video. I’m not saying I’m proud of it. I’m not saying it speaks well of me. I’m just saying I’m a simple man with a curious nature, and I can respect anyone who really knows how to party.

And… it’s funny! Come on, it is. There’s no shame in admitting it’s funny. Just picture it: Hunter Biden, the son of the guy who might be our next president, filmed himself smoking crack while having sex with some woman who has not been identified. He then put that video on his laptop. And then he… forgot it at the repair shop for a year and a half! I mean, what? I know crack is wack, but… what??

Now, I’m not saying that’s what really happened — if the NY Post is wrong, so be it — but just thinking about it is hilarious. You definitely shouldn’t smoke crack, but if you do, at least you should get a good story out of it. And this is a hell of a story.

You know who doesn’t think it’s funny, though? Twitter. That social-media website is so unamused by the NY Post‘s Hunter Biden story that users can’t even link to it. Here’s the error message you see when you click a link to the story on Twitter: 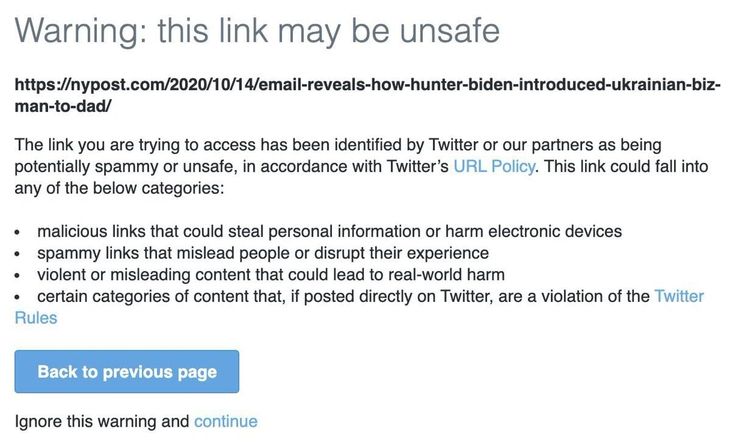 Unsafe! Oh my goodness. Well, we certainly don’t want anyone to be unsafe. Beware of the dangerous newspaper founded by Alexander Hamilton. (Y’know, the guy from the musical?)

And now Twitter is even locking down the accounts of anyone who shares any of the images, including the selfies of Hunter looking haggard and partied-out. In fact, when I tried to share one of those pictures, this is what happened: 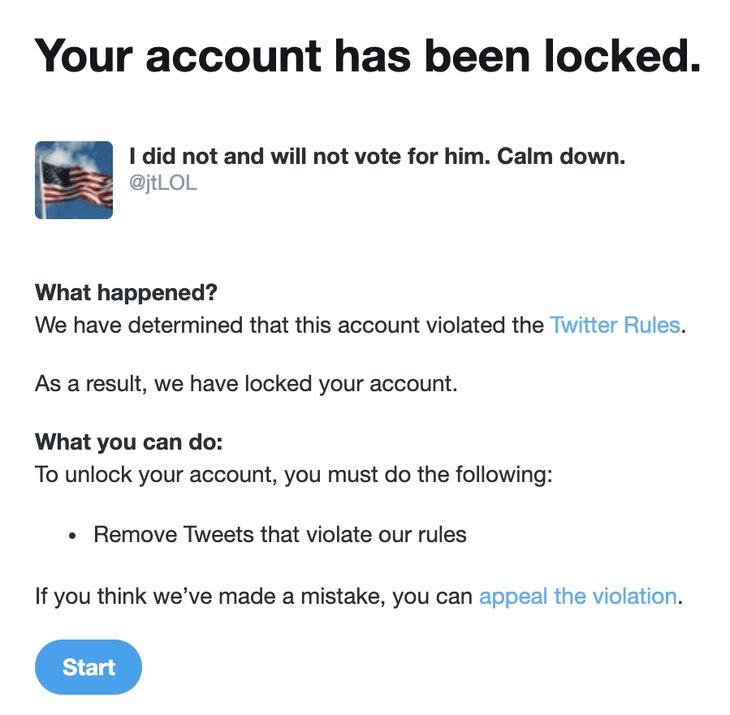 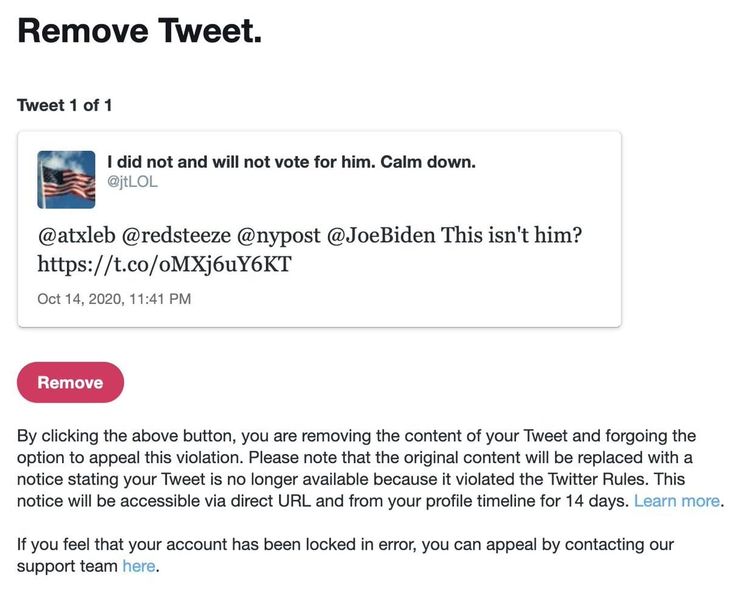 The instant I tweeted a funny picture of Hunter in the bathtub, looking like he’d smoked every leaf in Colombia the night before, my account was locked. Twitter does not want anybody sharing that photo.

As it turned out, I wasn’t alone. Lots of other Twitter users have been locked out for sharing that NY Post story, including several reporters and even the White House press secretary. Here’s what Twitter “Safety” has to say about it:

We want to provide much needed clarity around the actions we’ve taken with respect to two NY Post articles that were first Tweeted this morning.

The images contained in the articles include personal and private information — like email addresses and phone numbers — which violate our rules.https://t.co/plPa5SZ3we

As noted this morning, we also currently view materials included in the articles as violations of our Hacked Materials Policy.https://t.co/gCY4BnBHHa

Commentary on or discussion about hacked materials, such as articles that cover them but do not include or link to the materials themselves, aren’t a violation of this policy. Our policy only covers links to or images of hacked material themselves.

The policy, established in 2018, prohibits the use of our service to distribute content obtained without authorization. We don’t want to incentivize hacking by allowing Twitter to be used as distribution for possibly illegally obtained materials.https://t.co/qx9rlzWH4O

The NY Post says the laptop was abandoned at a repair shop for 18 months, and the owner of the shop tried and failed to get somebody to pick it up. That’s “hacking” now? You abandon a communications device at a repair shop, and suddenly the owner is a “hacker”?

Regardless, it’s Twitter’s platform and they can do whatever they want with it. If they suddenly decide that this particular news story is verboten, they have the right to do that. If they enforce their arbitrary, capricious rules on people who haven’t even broken them, all we can do is tell them it stinks. It’s their house and their rules.

But… why this story?

This isn’t the first time a newspaper has published a story about a relative of a politician doing something embarrassing. It certainly isn’t the first time in the Trump era that a newspaper has published something sensational that may or may not actually be true. But nobody at Twitter has ever done this before. They’ve never decided that nobody can link to or share anything about a particular news story. They’ve never just pulled the plug like this.

Now, a cynical mind might think that Jack Dorsey and his employees at Twitter are desperate to get Trump out of office, and they’ve given up pretending they care about anything else. But that can’t be it.

Anyway, I filed an appeal with Twitter and they said they’ll get back to me. Now we’ll see if I can get my account back without deleting a picture that doesn’t contain any personal information or anything that could be used to dox anybody. If I can’t, it just proves Twitter cares more about protecting politicians than facilitating the free exchange of information. It proves all their high-minded principles are just a hollow lie.

Twitter stands for freedom of expression. We stand for speaking truth to power. And we stand for empowering dialogue.

If they want to make it this obvious that they don’t mean it and never did, that’s up to them.

I still wanna see that 12-minute video, though. Call it: Biden’s Hidin’ the Sausage!