You're Not Imagining It: The Media Really Is Biased About Impeaching Donald Trump

Broadcast networks NBC, CBS, and ABC have donated 75 hours of free air time to Democrats’ impeachment hearings, despite notably poor (and consistently shrinking) ratings. Yet during President Clinton’s impeachment, these same networks could not be bothered to carry more than a few hours of independent counsel Ken Starr’s one-day presentation of the evidence against Clinton on November 19, 1998. 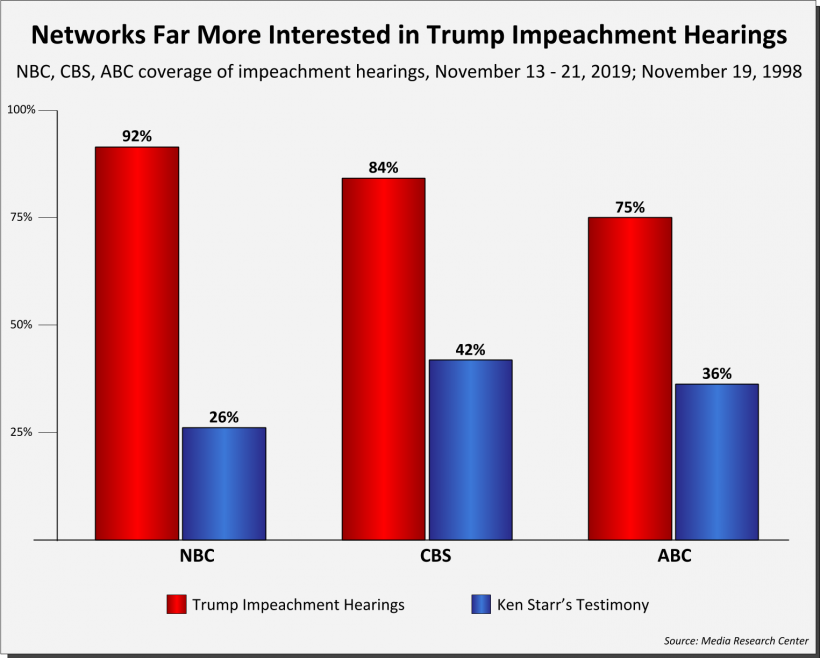 One wonders what motivates the alphabet networks, given the pathetic ratings achieved. Perhaps they’ve misread their consumers once again? In another report, NewsBusters dove into the ratings and showed that despite tremendous buildup and anticipation, the first few days of impeachment hearings achieved a fraction of the coverage of the Brett Kavanaugh confirmation hearings in 2018:

That’s down from a relatively tepid 13.1 million for Day 1 of testimony on Wednesday.

According to Axios, 20 million watched the Kavanaugh hearings in 2018, and nearly that many (19.5 million) watched fired FBI Director James Comey’s testimony in 2017.

As my colleague Kristine Marsh pointed out on Friday, broadcast networks are seeing lower numbers with the hearings than the usual fare. The 2.0 million ABC drew on Wednesday was one million fewer than watched Donald Trump, Jr. on The View the previous week.

NBC’s 1.7 million viewers on Day 1 was significantly less than the average audience for the soap opera Days of Our Lives (2.12 million for the 2018-19 season) which was put on “indefinite hiatus” last week.

When The View out-draws you … I mean … my goodness.

And yet the nets persisted with their wall-to-wall coverage. I can’t imagine the advertisers were terribly happy with that. It’s almost as if the coverage were motivated by something other than the profit motive.

Yes, impeachment coverage carries more weight than merely viewership and ratings. The serious subject matter surrounding high crimes and misdemeanors means far more than simply entertainment on major networks. Maybe, though, this represents a sort of focus-group in real-time. Most Americans don’t seem overly concerned that Congress might remove a sitting president from office—an otherwise momentous time in American history. Perhaps because they’ve concluded that the hearings won’t amount to much?

Clearly American viewers haven’t bought what the Dems and the networks have been selling. Could that be due to the fact that they never intended to give President Trump a chance in the first place?

Jeff Reynolds is the author of the book, Behind the Curtain: Inside the Network of Progressive Billionaires and Their Campaign to Undermine Democracy. You can follow Jeff on Twitter @ChargerJeff.