These charges are being aimed at the man Travis County, Texas, voters elected to prosecute criminals in November 2020. And the charges stem from one of José Garza’s highest-profile and most controversial cases.

On the night of July 25, 2020, a group of protesters illegally took over an intersection in downtown Austin. They approached a car as it was trying to make its way past the crowd through the intersection. One of the protesters, Garrett Foster, was carrying a loaded AK-47 rifle. As Foster approached the car in the darkness that night, apparently pointing the rifle at the driver, the driver, Army Sgt. Daniel Perry, fired his handgun in Foster’s direction from his car. Foster was killed. At least one other protester fired at Perry as he drove away. Perry was later stopped by Austin police and questioned about the shooting. He reportedly told the officers he fired in self-defense as Foster approached with his rifle pointed at him, as photos taken at the scene indicate. Texas castle law extends to one’s car and allows the use of deadly force in self-defense if the driver believes his or her life is in danger. Perry is a concealed handgun permit carrier, indicating a clean criminal record. He was driving for Uber on the night of the shooting and was released after questioning.

Austin Police Detective David Fugitt investigated the shooting and, according to the affidavit, found that Perry shot Foster self-defense and should not face charges.

According to new court documents filed in the case this week, Garza ordered Det. Fugitt to change his testimony before the grand jury, so that Perry would not be exonerated. This led to retaliation against the detective. 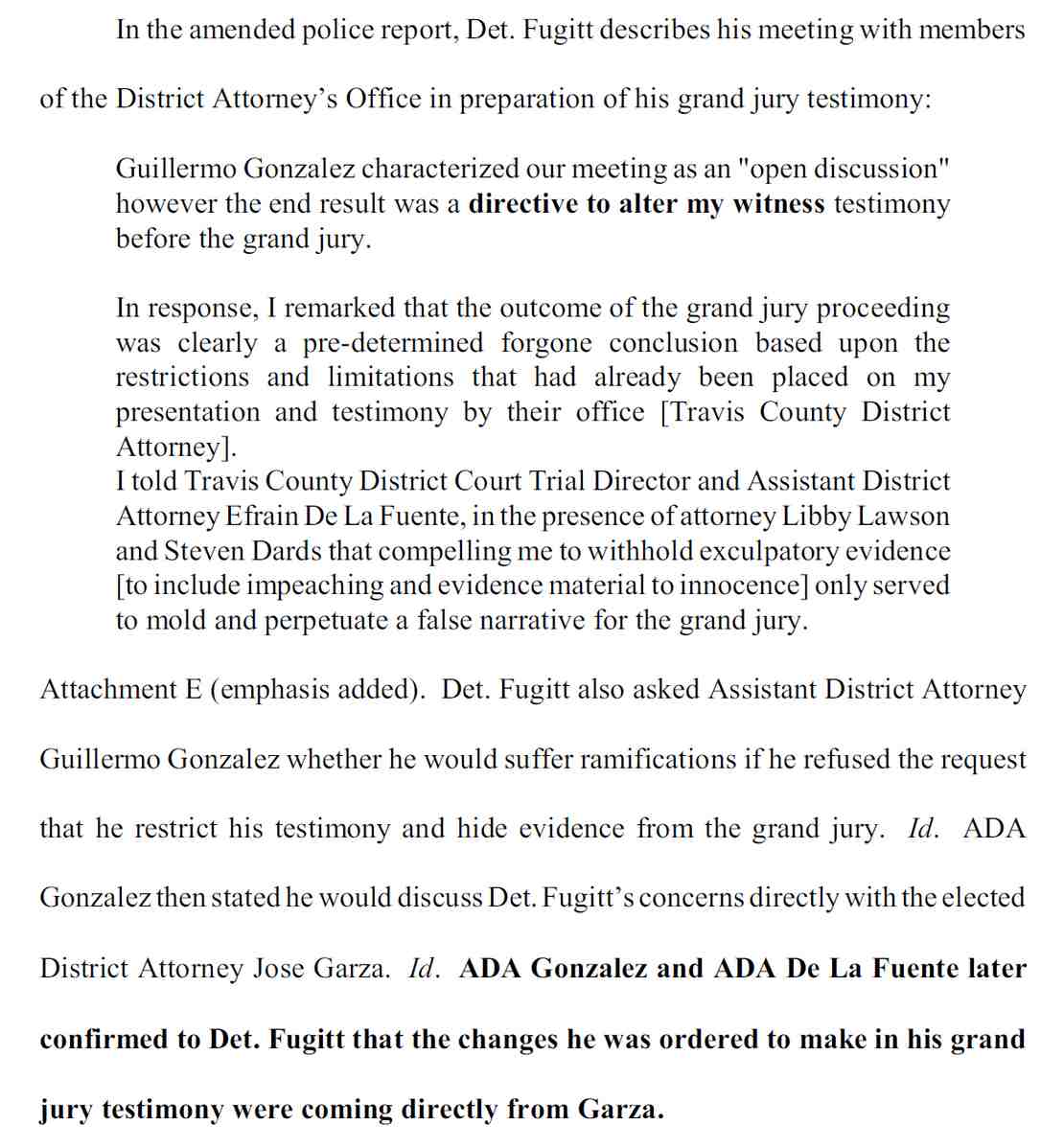 When Fugitt refused and stood by his finding of justified homicide, Garza retaliated. That retaliation implicates Austin PD acting Police Chief Joseph Chacon and Assistant Chief Ricardo Guajardo, according to the filing and several others in the case which PJ Media has obtained.

Det. Fugitt is a very experienced investigator with decades of service who has solved dozens of cases. He took copious notes of everything that transpired, according to the filing, including the specific details of the retaliation against him within APD, which came in the form of a threat to his career. 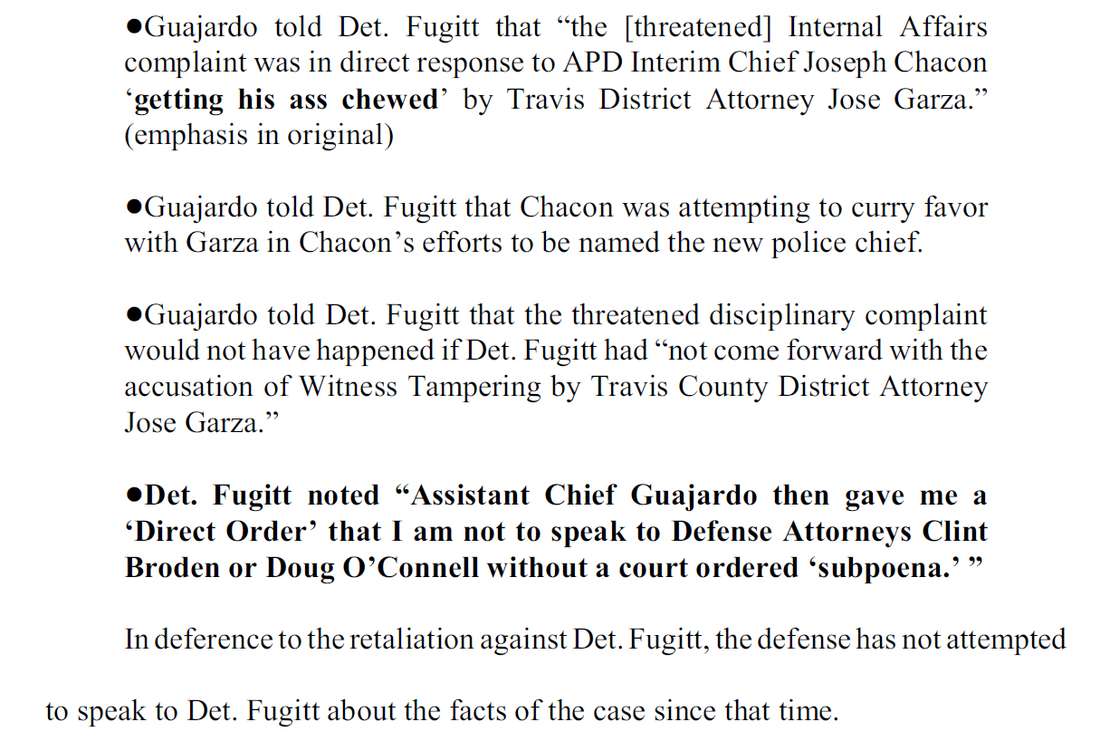 An Internal Affairs complaint can lead to disciplinary action against a police officer or detective up to and including termination.

The documents call for an evidentiary hearing to determine the facts surrounding Det. Fugitt’s direct accusations against Garza, which include new evidence and also implicate the two leaders of APD. The documents also note that Garza opposes such a hearing, which Sgt. Perry’s defense attorneys interpret as evidence of Garza’s guilt.

The document accuses District Attorney Garza of felony criminal conduct under the Texas Penal Code 36.06(a)(1)(A), unethical conduct, and violation of Sgt. Perry’s right to a fair trial under the law as a defendant.

Det. Fugitt’s notes, included in the filing, make clear what the lead detective in the case found based on the evidence. 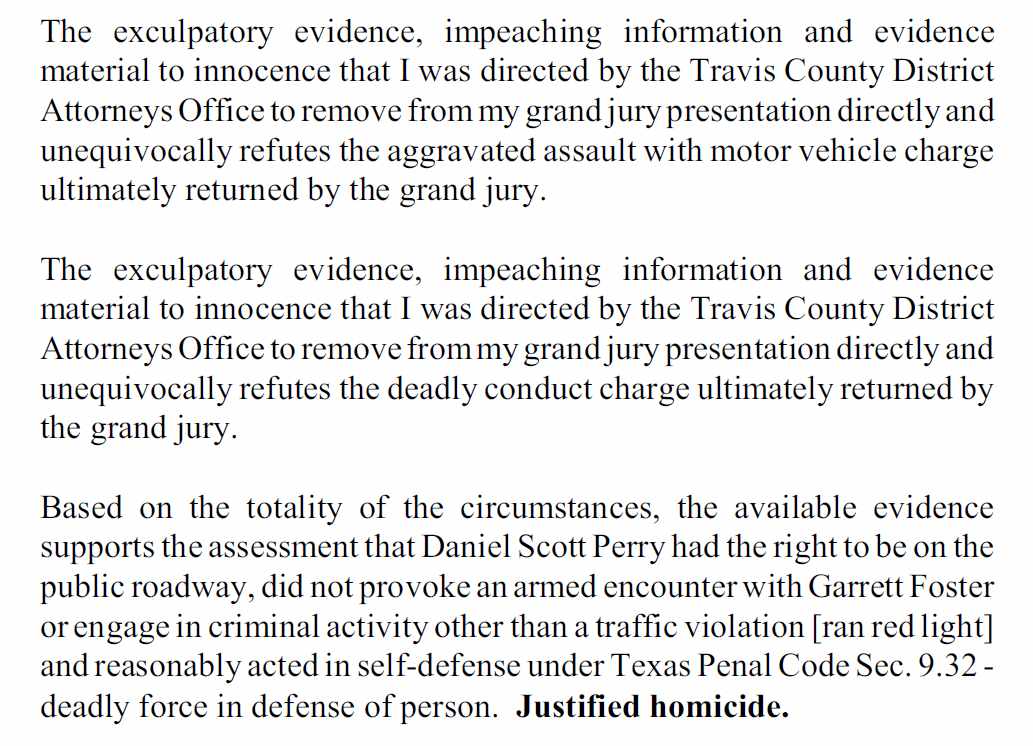 Other documents filed this week indicate that Perry intends to call Garza, the district attorney whose office is prosecuting him, to the witness stand due to the allegations of misconduct. The highly unusual move would likely disqualify Garza from participating in the prosecution of the case.

Chacon is one of three finalists vying to be named Austin PD’s next police chief.