LeBron James Incited Millions to Murder a Police Officer. Will It Cost Him Anything?

As America learned that a Columbus, Ohio, police officer shot and killed a teenage girl while she was in the act of wielding a knife at two other girls, NBA star LeBron James took to Twitter and incited his followers against the police officer. James has 49.6 million Twitter followers and is a hero to millions for winning basketball championships. He is very influential.

This is what he tweeted. 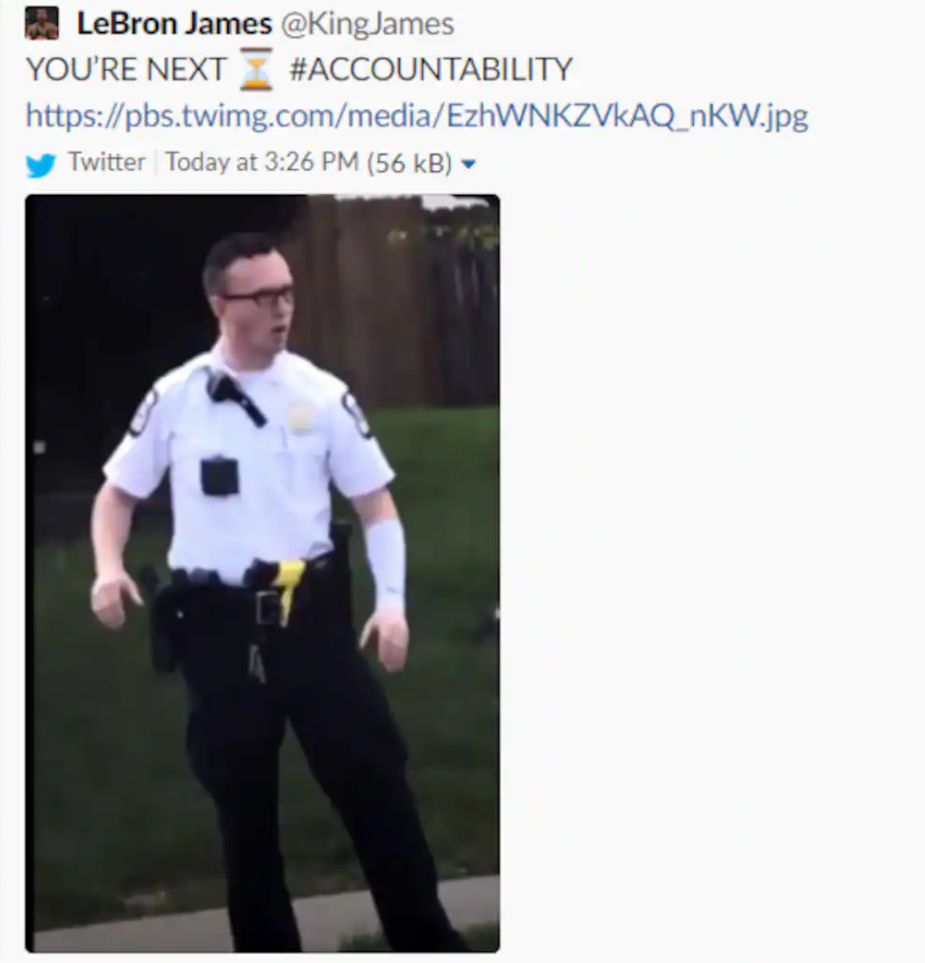 I’d have blurred out the officer’s face, but the fact is, James’ tweet put it out there and the officer’s name has also been released.

Columbus police made bodycam video of the shooting available very quickly after the incident. This is a still frame from it. It clearly shows that the deceased assailant was wielding a knife, a deadly weapon, with intent to use it against others. The responding officers had split seconds to decide what to do and could see the knife in the girl’s hand, as well as her behavior, which portrayed intent to kill by any reasonable definition.

The video of the shooting is here and countless other places by now. It’s very disturbing to watch.

Police were called to the scene — by whom, we don’t know yet but the caller says, “There’s grown girls over here trying to kill us, trying to stab us” — and found one girl fighting violently with two other girls. Police did not know who started the fight. Who started the fight may not matter much. The girl in black in the image above had a large knife in her right hand, large enough to penetrate a vital organ and kill. Such a knife could puncture the heart or a lung or slash a throat in an instant. Police officers see her brutally shove another girl to the ground and charge after another girl — the one in pink in the image above — and corner her against a car. Adults on the scene appear not to be intervening, other than one male, who is seen kicking a girl that the knife-wielding assailant had shoved to the ground. Police were on the scene all of 11 seconds before the officer in the image at the top of this post had to make a decision. He fired four times into the body mass of the girl with the knife. She fell to the ground. Police immediately administered aid but she died later at the hospital.

Some wonder why the officer didn’t fire to wound the girl. They’re not thinking logically.

Here is a clearer view of the knife. It appears to be a steak knife with a 4 to 6-inch blade.

Police officers are trained to aim at center mass, as that’s the most likely target to hit. “Firing to wound” isn’t part of anyone’s firearm training, police or otherwise. I have personally undergone live-fire situational training; “aiming to wound” is never taught. If you make the decision to pull the trigger and unleash lethal force, you are trained to aim for center mass to have the greatest likelihood of hitting your target. You’re also trained that pulling the trigger will change at least two lives forever: yours and the human being you are firing at.

Additionally in this situation, with so many other people around, even a shot to the arm or leg could very easily pass through the target and strike innocent people. Most police carry either 9 mm or .40 caliber firearms (I personally favor 9 mm for concealed carry). A 9 mm round does not simply stop if it misses its target. It can go through the skin of a car, through a window, even through thin walls in buildings nearby and strike innocent people inside. This incident occurred in a crowded neighborhood with many people around and others in their homes. Firing at the assailant’s arm or leg here could easily have missed or barely wounded her and killed the girl in pink. It could also have passed through the car and bounced off of the engine block or other hard metal parts within, striking others nearby. Aiming at center mass is actually the safest choice for all in the area except, of course, the person with the knife. The purpose of the police officer firing the weapon is to stop the assailant with the deadly weapon who is threatening others.

Going by the video, the officer’s Taser was not an ideal option. That too can miss, and Tasers can fail to stop someone whose adrenaline is amped up in the course of a fight. A Tased individual may still be capable of wielding a knife and stabbing another person. The girl in pink may still have been killed. Lethal force is usually most effectively stopped by lethal force. The knife represented lethal force by any reasonable definition in that situation.

Reports indicate the deceased knife-wielding girl, Ma’Khia Bryant, 16, was living in a foster home near where her mother lived. We don’t know why, but that’s surely not an ideal family situation. Reports indicate the girls had had previous issues. We don’t know the details of that yet. The death of a minor in any circumstance is tragic. The fact that her actions forced a trained police officer to make this fatal decision compounds the tragedy.

LeBron James is incredibly wealthy and influential thanks to his successful basketball career. He is easily one of the world’s most influential figures. He has nearly 50 million followers on Twitter. 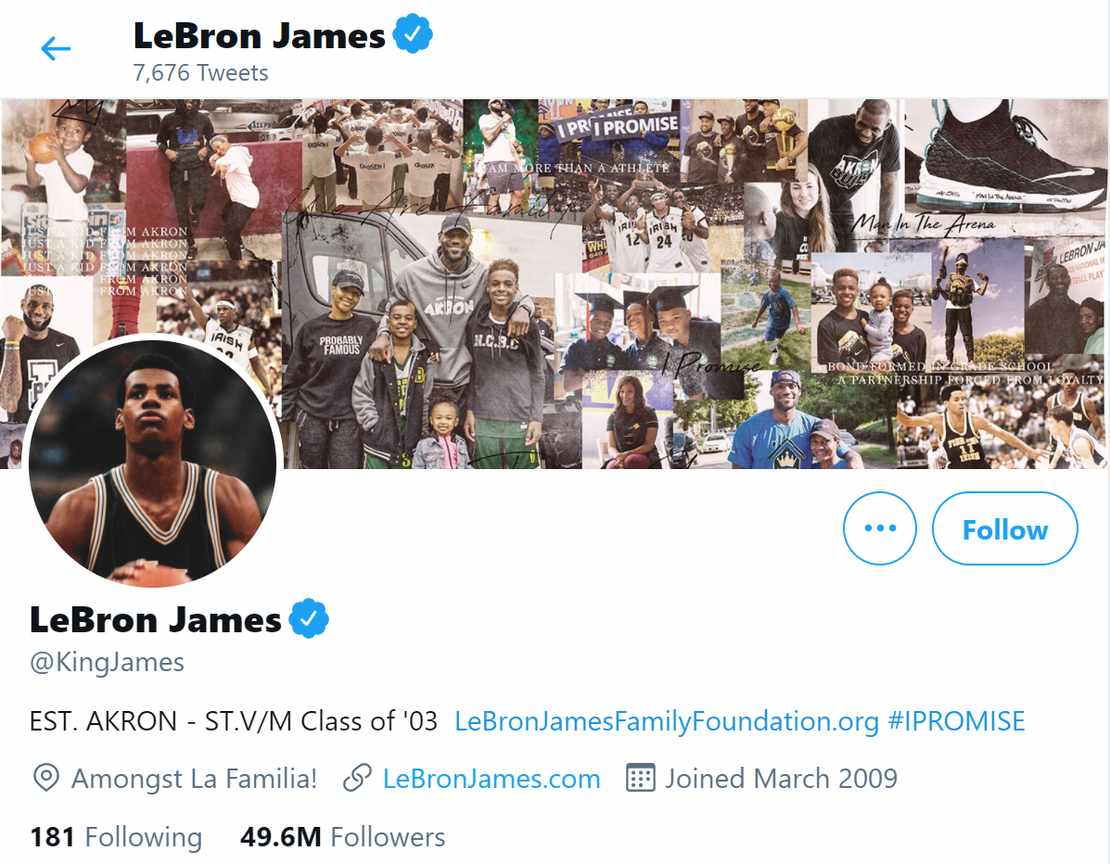 James responded to the tragedy despite the known facts at the time with a public call to murder the police officer. That’s the most reasonable way to interpret his tweet. The girl had just died. James tweeted in all-capital letters “YOU’RE NEXT” with a clear image of the officer. The incident occurred in Ohio, where James is a legend with a massive loyal following. The implications were clear. The girl had died, the officer should be next. LeBron was giving the signal to kill him.

James later removed the tweet, but the damage was done.

Twitter routinely censors people for far less but it failed to remove James’ clear call to violence. That’s likely because LeBron James is wealthy and powerful.

The NBA has not yet sanctioned him.

His corporate sponsors have not yet spoken up or taken action.

The NBA should consider banning James for several games or even expelling him from the league. His corporate sponsors, many of which have likely been agitating against Georgia’s election law, should sever ties.

James’ clear and obvious incitement to murder a police officer who probably saved at least two lives in the course of that tragic incident cannot go unanswered. But it probably will. We have two systems of justice and two systems of censorship and corporate activism now. James is fortunate that he’s on the politically correct side of all of that. He’s too big and powerful to have to answer for his actions.

As for police officers, their future course of action in volatile situations has been clarified: Don’t answer calls. Don’t go. If you’re on the scene, let it play out, even if innocent people are harmed or killed. The Ohio shooting makes it clear that millions will not react rationally and will blame you despite taking life-saving actions. Some powerful figure may even incite others to kill you from behind their social media feeds.

Not intervening may be the only way to ensure police officers won’t have to take drastic but justified action and then find themselves irresponsibly targeted by the world’s wealthiest and most powerful people, many of whom are immoral and irrational and weaponize social media for their own purposes. More people will die. That seems to be how some people want it to be now. They defunded and demoralized police, crime has risen accordingly and hurts the communities they claim to care about the most, and some now target police officers for direct harm after those officers have obviously saved lives.

LeBron James cares more about his brand than your life.