Texas Electric Board Members Live WHERE?

Many, probably most, Texans hadn’t heard of the Electric Reliability Council of Texas until this week. Then a historic winter storm froze up the place and “electric reliability” turned into an unfunny joke for far too many. Their electricity was reliably unavailable.

Well, except in certain well-lit urban downtowns. If you live outside of those, as most Texans do, you were forced to play a grim version of Russian Roulette with your power and water supply — if you could get either. Your water pipes may have frozen and burst, rendering your frigid home uninhabitable. I have friends who are dealing with this and will be dealing with it for a long time after the storm.

Power went out for millions of Texans several days ago and is only now being restored piecemeal. Freezing temperatures won’t even leave central Texas until Friday. Much of the state north of that may stay cold for days yet.

Texans are getting to know the 50-year-old council and are not liking what they’re learning. For one thing, about a third of its members don’t even live in Texas.

A third of the board of directors that operate the state’s electrical grid do not appear to live in Texas, and their performance in wake of widespread outages has led to a Dallas-area lawmaker’s call for change.

Records show the two top office holders of the 15-member board of the Electric Reliability Council of Texas (ERCOT), live out-of-state. Three other ERCOT board members also appear to live thousands of miles from Texas.

The thought of some Californian voting on our energy market doesn’t sit well.

For another, it turns out that the board members nominate each other to it.

How that hasn’t come up as a glaring conflict of interest before now is a head-scratcher. Pals nominating pals who nominate other pals to this board in Texas? And you don’t even have to live there?

Well, now that the glare has turned on ERCOT, it has removed the board members’ names from its website. They’re gone. They were all there earlier in the week.

ERCOT has had a difficult job dealing with this terrible storm, but its public communications have not helped. As the storm started in earnest Sunday, its social media released this. 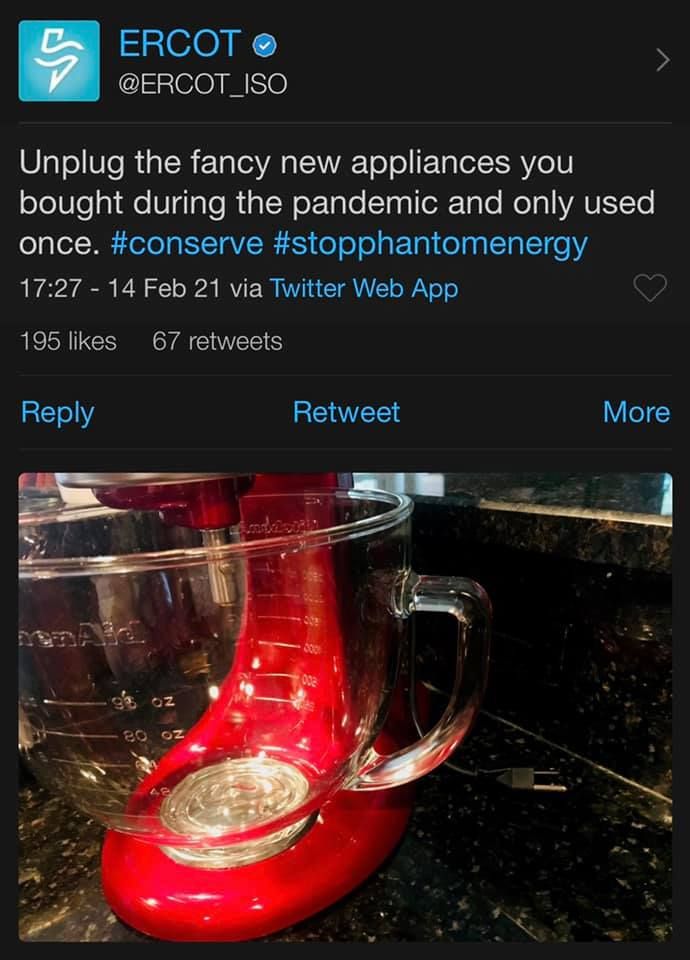 And now its board has disappeared itself precisely when Gov. Abbott and everyone else in the state is demanding transparency. We’re beyond “this is not a good look” territory, well beyond. The legislature is angry. Hearings will commence next week.

Among the conversations to be had are how much the state should depend on wind power, which did collapse as demand surged but has bounced back, and if we’re going to depend on wind then why don’t we winterize the windmills in West Texas? It gets cold out there, not usually this cold, but cold enough to consider winterizing. That will cost money, but should be discussed. Another will be, is it possible to keep a few coal plants in working order just in case another winter like this strikes? There will be loads of economic questions attached to that one. Coal plants were the casualties of the billion-dollar subsidies that developed wind and solar power in Texas. But coal is more reliable than just about anything else when you need it most. It’s also cheap and it’s available in parts of Texas. Another will be, should Texas fully embrace nuclear? Both it and coal have provided a steady power baseline throughout the storms, though one reactor did have to get taken offline when its water cooling system froze up. That was the one outside Houston, by the way, which is normally in the 60s to 70s this time of year. That part of the state gets hurricanes but it doesn’t usually get ice and snowstorms.

A quick and incomplete mental sketch of how all this happened might go something like this (investigations will find out a whole lot more). The wind turbines out west froze Friday. Demand statewide surged as every county got blasted, starting Friday to Saturday. As demand surged, wind — which usually provides between 25% to 42% of Texas power but can drop to roughly 10% in the winter — dropped all the way to about 2% of its normal output Monday night and Tuesday morning. Natural gas compensated, but then its pipelines froze, and even the oil wells froze up. Production in the Permian went off a cliff, causing havoc in the market energy prices. Ice was also snapping powerlines in untold numbers of places. Crews have been hampered even getting to them due to the widespread ice. The state had no respite, no region where demand for power was not surging so it could balance the grid, which it usually does have. For instance, in most circumstances, it could get very cold in the Panhandle but still be 70 from Waco south. That’s a huge area, larger than many whole states, over which most people won’t be using a lot of power, so power could be surged to the cold area, which is also larger than many whole states, and which is not as heavily populated. But this week, the entire state — which is the size of France and twice the size of Germany* — froze. And millions have already been hitting power harder than usual by working from home thanks to the pandemic. Then we all, 29 million of us thanks to population growth that none of our infrastructure has been able to keep up with (thanks, California!), needed a lot of heat just to make our homes liveable and keep pipes from bursting and destroying everything. Did I mention that most Texas homes are engineered for extreme summer heat, not arctic winters? And, that we have millions who’ve never dealt with cold and ice like this before, either because they’re new to the state or because this is a historic storm?

I’m not a fan of using the phrase “perfect storm,” but this was one and still is.

ERCOT will change. Count on that.

Rep. Jeff Leach, R-Plano, told WFAA that he was “totally shocked” to learn a third of the ERCOT Board of Directors lived outside Texas.

“People who are making literally life and death decisions on behalf of our families and our communities don’t even live in the state of Texas,” Leach said. ”… I’m frustrated and cannot believe that the board chair of our leading energy decision maker doesn’t even live in Texas, but lives in Michigan. It just cannot be that way here in the Lone Star State.”

Leach said he has begun drafting legislation to prohibit non-Texans from serving on the ERCOT Board. Now, board members are appointed by a nominating committee made up of current members.

That screams “conflict of interest” and “sweetheart deals.”

ERCOT will have to change, a lot. Its methods will change, its board will change, its transparency and communications will change. Anything less will not leave us ready for the next storm and for communicating what’s happening to Texans affected by it. Several agencies may have to consider some new measures and mandates.

Between the pandemic, the economy, a brewing border crisis, and now this massive winter disaster, the governor and the legislators have their work cut out for them. They’ll have to be proactive and smart. Millions of Texans are still freezing and are justifiably angry about it.

*I originally wrote that Texas is the “size of Germany.” Turns out it’s twice that. It’s not often I underestimate the size of Texas, but I did here.