Wednesday morning more than 1.3 million electric power customers across Texas remain without power during the coldest winter storm in decades. Gov. Greg Abbott put all of Texas’ 254 counties under a disaster declaration as the state has been hammered with a series of major and historic winter storms. The reasons for the collapse of the Electric Reliability Council of Texas (ERCOT) grid are still being debated, and it’s certain that there is more than one cause and more information will come out.

But one of the most contested issues is the role wind generation has played. Prior to the onset of the storm last week, Texas led the nation in wind power generation and depended on the wind turbines in West-Central and Western Texas, along with a smaller number of turbines along the Gulf Coast, for about 25% of its electricity. As wind power has increased, coal-powered generation plants have been taken offline around the state. Texas has abundant coal, oil, and natural gas, and also has nuclear plants near Dallas and near Houston.

Real-time data from the U.S. Energy Information Administration shows that wind power collapsed as the winter storm swept across the state.

To understand the graph, the very top line, beige, is natural gas power generation. Hydroelectric is the barely perceptible blue line at the bottom. Wind is the green line; coal is brown. Nuclear power is purple.

The graph clearly shows all forms of power generation dipped, with wind power collapsing from Monday to Tuesday before recovering somewhat. Meanwhile, natural gas, coal, and nuclear power generation also dipped but continued generating power. Gas pipelines and a cooling system at the STP nuclear plant outside Houston did suffer the effects of the extreme cold.

This graphic tells a similar story. Wind, again, is in green. 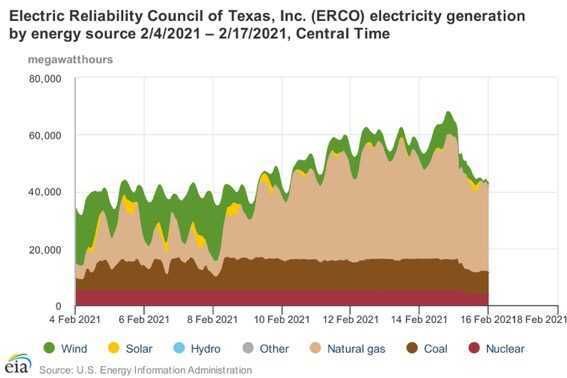 As the graph plainly shows, wind generation choked down but natural gas compensated. Coal and even nuclear power generation dipped. Solar generation has been negligible due to cloud cover and several inches of snow and ice.

The cold has created extreme demand across the state. During most winter storms, the Panhandle, West Texas, and even North Texas around Dallas and above toward Paris may get cold but Central and South Texas could remain well above freezing. This has not happened during the current series of storms. The entire state is in a deep freeze, with snow appearing even on Galveston Island’s beach. Galveston averages lows of about 50 degrees and highs in the mid-60s during a typical February. It’s 37 degrees in Galveston as I write this, well below average. Austin has seen single-digit temperatures at night.

To put all of this into some perspective, the storm that dumped more than six inches of ice and snow on Austin Sunday night would, by itself, have been a historic storm. It dropped more snow on the capital than any other storm since 1949. It was preceded by a major cold snap and has been followed by more extreme cold and then another ice and snow storm Tuesday night. Texas has not suffered a single historic winter storm over the past several days, but a series of them without any warming in between. It’s unlikely to get above freezing in the Austin area until Friday. Points north may stay below freezing for a couple of days after that. This is putting more demand on the grid.

Add to all of this, when Texas gets winter storms it usually doesn’t just get snow. Snow is fairly easy to deal with. Texas also gets ice, which can snap electric lines and break trees and tree branches, which also can fall on and break power lines. A tree in my yard is bent over by ice to the point that it looks like an invisible hand is holding it down. We can expect the ice to kill off millions of trees around the state. The ice layers also render most roads impassable. All of this is very unusual for Texas, but not unprecedented. The winter of 1836 was notably harsh; Santa Anna reportedly encountered deep snow as he marched his army toward San Antonio.

Most winters, Austin will have a few cold days but no snow. Central Texas is known to go entire winters without anyone having to so much as scrape any frost off their car windshield. Austin has had two significant snowstorms in 2021, with the current one being historic by any measure.

Piecing known information together, the wind turbines in Western Texas froze up starting Friday before the icy snowstorm hit, on Sunday night to Monday morning. This destabilized the Texas grid ahead of the worst of the storm. The storm produced the temperatures and precipitation the forecasts expected, but with weakened power generation and demand skyrocketing to heat millions of homes, homes which for the most part are not insulated against the current level of cold temperatures, the grid was set up to suffer mightily as it’s not hardened against extreme cold such as this once-in-a-century storm series is delivering.

Gov. Abbott has ordered a thorough investigation of ERCOT and the Texas Legislature will begin holding hearings next week. Texas’ dependence on wind power generation is likely to come under heavy scrutiny. The fact that many of the ERCOT board live outside Texas is already coming under heavy fire. Texas having its own power grid will likely come under scrutiny as well.

Addendum: I should add that we know production in the Permian decreased very significantly too, with demand surging and all significant power sources dipping — and wind and solar dipping more than the other sources. So Texas experienced a confluence of unusual events that pushed the grid statewide far beyond normal tolerances. Opportunists such as AOC and Beto O’Rourke are deliberately politicizing the storm. Neither actually understands energy. Both understand rank dishonesty.

The Great Texas Valentine’s Day Freeze and the Statewide Blackouts: What Happened?