The Great Texas Valentine's Day Freeze and the Statewide Blackouts: What Happened? [UPDATED]

Texas is suffering rolling blackouts and power outages just when its citizens need power the most — a brutal winter storm is hammering the entire state. Even Galveston Island has snow on the beaches, and all of Texas’ 254 counties are being hit hard.

Before diving into what happened in the current energy crisis striking Texas, it’s worth noting a few facts.

The Texas power grid — it uniquely has its own — is generally hardened against excessive heat. With heat, you tend not to get wind turbines, oil wells, gas lines, and water pipes freezing.

With extreme cold, you can get all of those and they all bring their own complications. Add in the likelihood of ice and snow snapping tree branches and taking out powerlines. The current storm dumped 6.4 inches of ice and snow on Austin Sunday night/Monday morning, the most since 1949 — 72 years. Temperatures dipped to historic lows and locked there. The storm brought layers of ice, then snow, then ice, in a frozen lasagna that makes even the simplest roads impassable for most vehicles. Highway 2222, which is a wide, scenic thoroughfare west of downtown Austin, turned into a snowboard track Monday.

College kids grabbed their kayaks and slid down every available hill. Texas’ systems do heat pretty well, but when Austin is colder than parts of Alaska, which happened this week, the system will be tested.

Tested it has been. Systems themselves in different places are different reflecting their circumstances. In Alaska, they have outlets to plug in heaters to keep your car engine block from freezing. It’s hardened against cold, but not much against heat for obvious reasons.

In Texas this week, the celebrated windmills out in western Texas reportedly froze up Friday, even before the snow and ice fell across the state. The Austin American-Statesman noted the freeze Sunday afternoon. 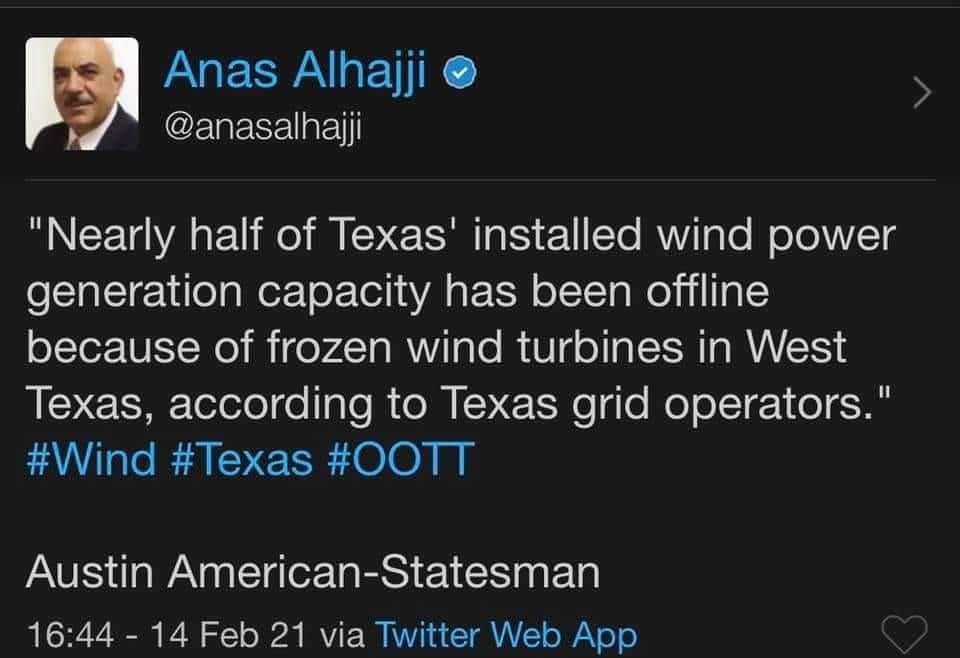 The snow and ice didn’t fall until Sunday night and Monday morning. The frozen turbines stopped producing early and put more pressure on the rest of the grid before the freeze set in, which wasn’t lost on Texans.

A helicopter running on fossil fuel spraying a chemical made from fossil fuels onto a wind turbine made with fossils fuels during an ice storm is awesome. pic.twitter.com/3HInc2qKb9

That particular image turns out to be from a previous freeze, but the point stands: Renewables rely on the old reliables.

Texas relies on a mix of natural gas and oil, coal, wind and solar, and nuclear. For various reasons, mostly having to do with the physics of things freezing when they get too cold, and the difficulty of getting around when ice and snow are on the ground, all power sources underperformed as demand surged. Rolling and just plain old blackouts ensued. Millions of Texans have been without power for some or all of Monday and Tuesday, with another winter storm with ice and snow on the way. And it’s very, very cold.

Here’s something we’ve learned this week about the Texas grid: In extreme circumstances, the answer, my friend, is not blowin’ in the wind, no matter what Austin’s addled Mayor Adler says. The wind can gust hard all year across the plain, but if the turbines are frozen, they’re not generating any power.

The answer is also not in the sun despite its ongoing nuclear superpower. Solar panels simply don’t work well once the ice and snowfall, and they don’t work at all at night. Wind and solar rely on storage technology that’s not up to snuff yet, and brings its own mining and recycling issues. For one, the batteries demand minerals not in abundance in the United States, creating dependence that the development of domestic oil and natural gas evade. On this, Alex Epstein has a point in this thread.

There is a lot of conflicting "information" about the TX blackouts. Here's the bottom line: the root cause of the TX blackouts is a national and state policy that has prioritized the adoption of unreliable wind/solar energy over reliable energy.

The Electric Reliability Council of Texas, or ERCOT, manages the state’s power grid. It’s important to note that while ERCOT has been around since 1970, the storm Texas is suffering is probably the worst across a much longer timeframe with ice, snow, and temperatures all taking the entire state well outside its usual boundaries.

Austin averages about 60 to 70 degrees in February. Its high temperature lately has been around 20 degrees, with lows in single digits and wind chills below zero. This — and the frozen precipitation — simply isn’t within the state’s normal parameters.

Adding to all the issues noted above, actual oil and natural gas production including in the Permian has fallen off hard as of Tuesday, about 20% of total U.S. output.

EXCLUSIVE: As early Tuesday, U.S. crude production has plummeted by **over 2m b/d** due to the blizzard, with the Permian the most hit region (that's close to 20% of total U.S. crude oil output) | #OOTT #texaspoweroutage #TexasFreeze with @vtobben https://t.co/WtlL9PhWGS

Why? Wells are frozen, pipelines are frozen (yes, that happens), and crews can’t get them unfrozen and operational fast enough to get production back online. This is driving energy prices much higher. Those who have never lost power will see sharply higher energy bills once this is all over.

But this storm has tested the whole grid. It’s not the first time Texas has faced a severe test, and it’s important to note that while this week presents a struggle for most of the state, in past times, a less severe storm had more severe effects.

Texas suffered a massive winter storm in 1983. Then as now, ice and wind took power lines out unpredictably, and then as now workers struggled to get them back online. Just getting to the downed lines to repair them is difficult. But at that time, power in the Dallas area where I lived went down and stayed down hard for more than a full week. Roads were impassable for days — Texas cities and counties usually have no need for the snowplows that are common farther north. We survived then thanks to having a wood-burning stove and ample firewood, and a convenience store a walking mile away.

There are fewer wood burners around now, and we’re more reliant on less reliable wind and solar now. But we’ll still probably get through this with fewer down days than in storms past, despite this storm being worse than previous ones. Today’s system is more resilient than in the past, though wind and solar do render it less stable than it could be. Am I saying we need more nuclear power, as in Comanche Peak? Yep, that’s exactly what I’m saying. Demand is much higher now than it was in 1983 thanks to the multitude of devices we all have now, and the growth of electric cars on the grid.

Speaking of which, can you imagine how much worse this would all be if we were all forced to use electric cars? People would be charging them every chance they got, and using them to charge their cell phones and laptops.

Elon Musk has recently warned that even in good times, any push to electric cars would double electric demand. No grid anywhere is ready for that. California’s can’t even really handle its current load well but it’s pushing to ban gas vehicles. That’s idiotic.

It’s perhaps just as idiotic to have left empty downtown office buildings in Austin, Houston, and other major Texas cities lit up Monday night while millions shivered in their homes in the dark. That happened too. Texans are right to ask questions about that. They’re also right to ask why the head of ERCOT lives in Michigan, not Texas, and whether Texas has become over-reliant on unreliable wind and solar power. It’s true that other power sources have suffered, but wind appears to have struggled days earlier, making the Texas grid unstable going into the winter storm of the century.

Update: Gov. Greg Abbott has added ERCOT reform as an emergency item for the legislature’s agenda, with a hearing scheduled for next week.

This storm will be over by then, with temperatures getting around 70 in central Texas by Sunday or Monday. But this week’s storm left millions cold and in the dark, and even HEBs and Whataburgers were forced to close. So it will live long in the memory.

We are ordering an investigation into ERCOT and immediate transparency by ERCOT. pic.twitter.com/Mt2GPlaFuE

Update: I’ve done agency social media. This is not a good look.

Unplug the fancy new appliances you bought during the pandemic and only used once. #conserve #stopphantomenergy pic.twitter.com/pq33K9sF5O