Thursday we posted some details about some of the people who entered the Capitol during the riot on Wednesday. One of those individuals is John Sullivan.

According to the video Sullivan captured of the events, he encouraged protesters to enter the Capitol.

Sullivan said he also intended to “support the Black community” with his attendance, but also feels it was “important to understand” those who were protesting in support of President Donald Trump.

But some of the 40-minute video he posted to his social media sites contradicts his assertion that he and another woman were “only filming” the actions and not participating as he can be heard in the video encouraging people to join them as they push their way through police barricades.

Just after people broke into the building, Sullivan — wearing a gas mask and wielding an iPhone on a stabilizing stick — and a woman who said Wednesday that she was making a documentary on Sullivan, are on the first porch area outside the entrance looking back over the throngs of people around the Capitol. They can be heard encouraging people to climb the wall, saying, “Come on. Let’s go!”

Sullivan claims he was just “blending in.”

Many, probably most, of the people who entered and damaged the Capitol are Trump supporters. Several have lost jobs as a result, and many will face charges. One, Ashli Babbitt, was shot and killed by Capitol Police, right next to Sullivan.

There has been some question of who instigated the crowd to enter. Sullivan, by the evidence of his own video, did. He is anti-Trump and aligns with BLM.

The name of his group, Insurgence USA, suggests his intentions. An insurgence is “an act of rising in active revolt.” Another word for insurgency is insurrection. A pop-up on the group’s website says “WE ARE THE REVOLUTION.”

None of this excuses those who invaded the Capitol. It does shed some light on how it happened.

Sullivan has a history of organizing a previous protest that turned violent, from which he faces criminal charges.

Charging documents say Sullivan recorded several hours of the protest and is seen in the recordings “kicking vehicles and threatening drivers” and directing protesters to block intersections.

During that protest, a Provo man, 60, was shot in the elbow after protesters blocked his vehicle. Sullivan later admitted to police that he knew who the gunman was but failed to report it to authorities, according to the charges.

The Provo protest shocked those who heard about it, as protesters surrounded the man in his vehicle, refused to let him pass, and shot him.

During a protest in August in Washington, D.C., Sullivan openly called for “revolution.”

In August 2020 remarks to a small crowd at a Washington, D.C., intersection, Sullivan pointed to the nearby White House and unleashed a torrent of violent rhetoric. “We … about to burn this s— down,” he said. “We gotta … rip Trump right out of that office right there,” he continued, adding, “We ain’t about … waiting until the next election.” He then led the crowd in a chant of, “It’s time for revolution.”

His Insurgence USA group’s website advertised an event called “Kick These Fascists out of DC” on Wednesday around the same time as a pro-Trump rally near the National Mall.

In this Insurgence USA tweet, Sullivan can be seen on video preparing to go to Washington two days prior to January 6. The tweet uses the hashtags #BLM #Riot #BlackLivesMatter #DonaldTrump #Protest #Fuck12 #Police. 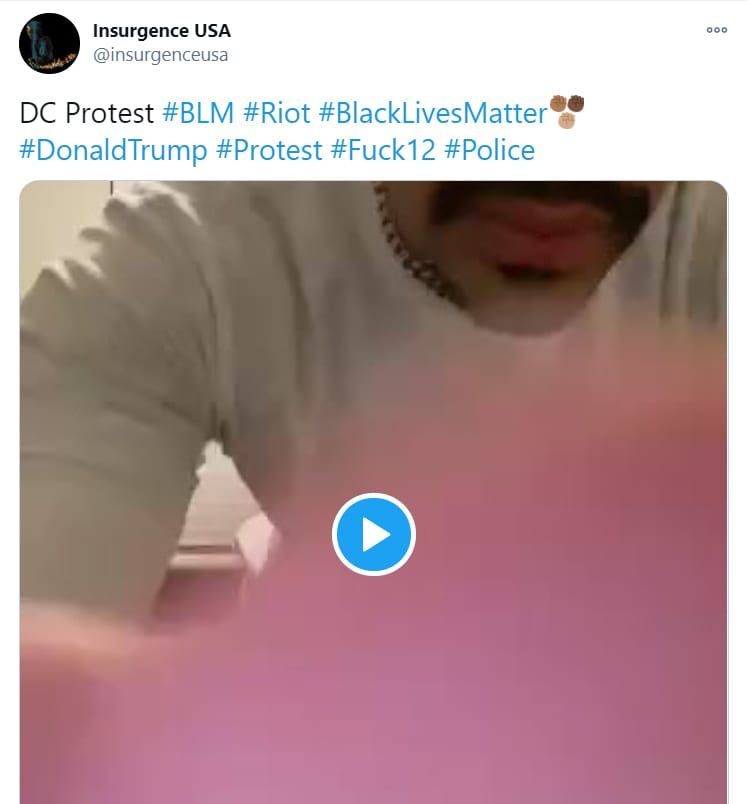