Can We Talk About Horn Hat Guy?

At the height of the events at the Capitol on Wednesday, this photo emerged. It prominently depicts a trio of the people who breeched the building, with others behind them. Who are they?

Let’s focus on horn hat guy. He should be easily identified, given the tattoos and the distinctive headgear. If he has turned up at other protests or events in that gear, it shouldn’t be difficult to find him.

Right after this photo emerged, it circulated on social media as “proof” that antifa was behind or at least involved in Wednesday’s incursion. That still might be the case. More on that later. But what about the guy in the horn hat?

It turns out that he has turned up at protests. He gave an interview to a reporter in Arizona several months ago.

Here’s part of my interview with Jake Angeli, the 32-year old man I previously posted about, who thanked the president @realDonaldTrump and Q.

He applauded the work of the president and criticized that of the press. @azcentral pic.twitter.com/PbQFGhNCq6

There’s no question the horn hat guy in the photo and the man in the video interviews are the same. Unless he’s a deep double agent activist, he’s a real Trump supporter.

He’s also apparently affiliated with QAnon, and is known as the “QAnon shaman.” That movement is not part of the Republican Party. It has attached itself to Trump during his presidency. Jake Angeli is also a small-time actor and singer according to WSAV. This doesn’t mean he’s being paid to act at the protests. He’s been spotted at them for months and aligned himself with QAnon at all of them that I’m aware of. There’s no evidence at this point that he’s anything other than a QAnon Trump supporter.

Another rumor circulated regarding the man to horn hat guy’s left in the photo, the one with the hand tattoos. Many have speculated that the most prominent tattoo is a communist hammer and sickle symbol, which would align him with communism and antifa, but certainly not Trump, the GOP, or MAGA. The resolution in the original image is weak, but here’s a close-up. 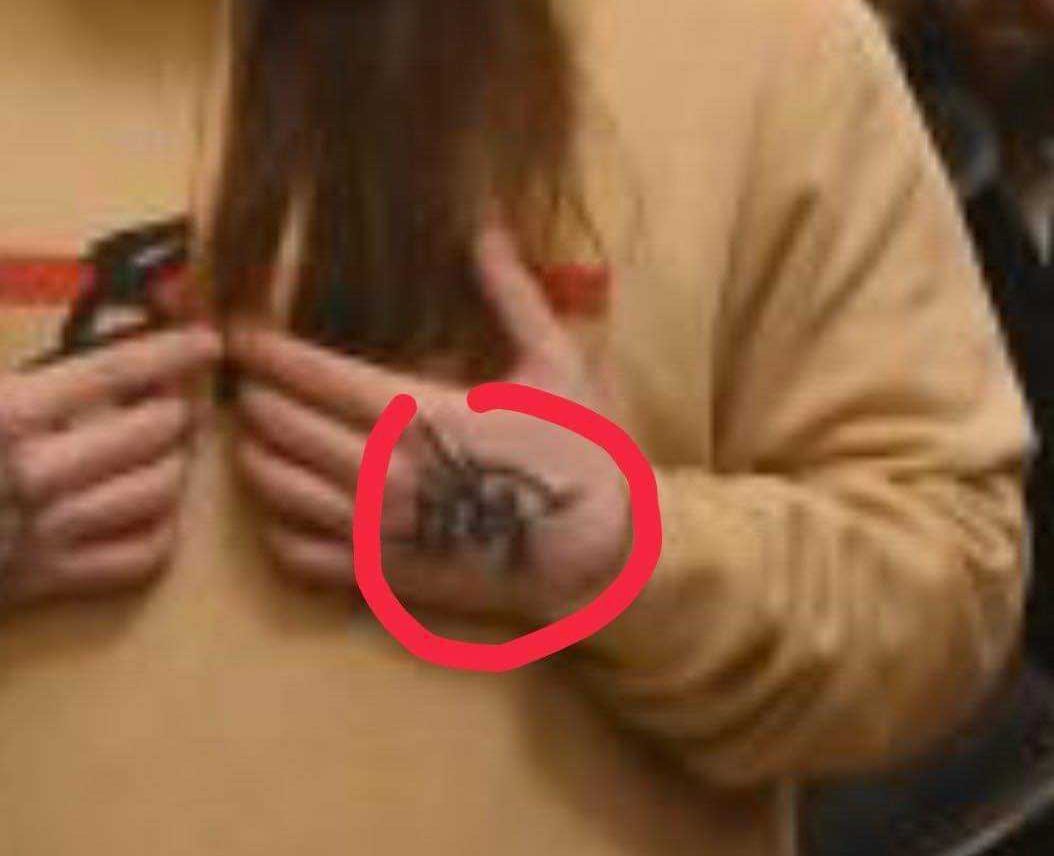 That’s not a hammer and sickle. It’s most likely a symbol from the video game, Dishonored.

According to the Dishonored fan wiki, it’s the “Outsider’s Mark.”

The Outsider’s Mark is a special brand granted by the Outsider to individuals of his choosing, which gives them access and resistance to an array of supernatural abilities.

The Mark is given without regard for merit to individuals who have piqued the Outsider’s interest. Bearers of the Mark can use runes to strengthen their powers and gain new abilities. The Outsider places no conditions on marked individuals, allowing them to use their powers as they see fit.

You can Google “Dishonored symbol tattoo” and see that it’s a fairly popular mark among gamers, and they get it tattooed on their hands as the man in the photo has. Some have identified him as a man in a phillyantifa photo, but that doesn’t appear to be the case. In any case, the tattoo isn’t a hammer and sickle. It’s not political.

As for who actually broke windows to get into the Capitol, this video suggests at least some of that was carried out by antifa and was stopped by Trump supporters.

Here’s another one making the rounds: a man from Utah identified as John Sullivan.

He’s been identified with anti-Trump politics during 2020 and was spotted inside the Capitol Wednesday. He says he was there but did not break in, he was there to document it. He was near the scene where Ashli Babbitt was shot and killed after she climbed through a window. Babbitt is a confirmed Trump supporter. Sullivan isn’t.

John Sullivan is the founder of the civil rights group Insurgence USA and does not align politically with President Donald Trump, but has been in D.C. this week for several planned protests including Wednesday’s rally at the Capitol.

This is Insurgence USA’s website. It’s not a pro-Trump group. It’s also not BLM or antifa, apparently, though it does use “revolutionary” rhetoric.

A witness to Wednesday’s event told me, as it was going on, that some in the crowd were urging others to go forward into the building, but most Trump supporters did not do so. They stayed out and went back to their transportation to leave the city. It’s unknown who was urging people forward.

It’s going to take time to sort out who did what at the Capitol on January 6, 2021. It appears people from multiple factions were involved. After a year of mass hysteria moments, we have the mother of all of them on our hands.