Why Aren't the Media Polling and Reporting in-Depth on the Riots?

Up until a few weeks ago, late June or early July, media constantly polled Americans’ attitudes toward the ongoing street protests over the death of George Floyd.

Those polls consistently found that Americans generally supported the protests. But if you Google “poll Americans reactions to city violence” you’ll see something interesting.

The media appears to have stopped polling about the protests/riots. Here’s a snapshot. Look at the dates — nothing recent. 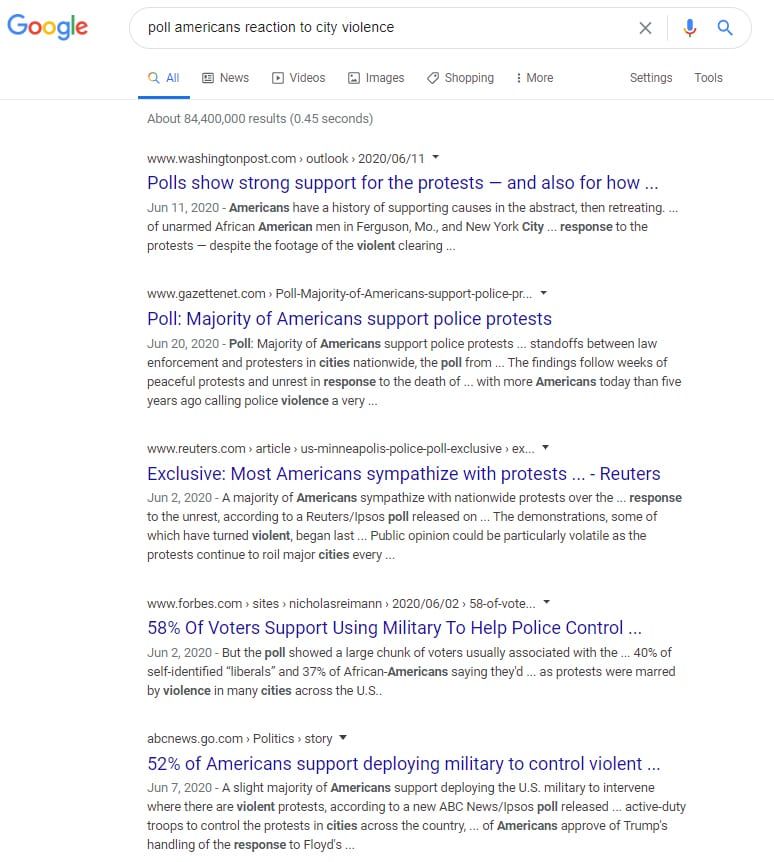 Google search for stories on ongoing riots and polls about them. July 24, 2020.

Note those last two stories. The media was polling what Americans thought should be done about the riots, and while comparing the results of one poll versus another can be dicey — different sample sizes, methodologies, and so forth — a majority of Americans wanted the violence stopped. They favored deploying the military to do it, in keeping with the Constitution’s call to “insure domestic tranquility,” and the number who wanted that to happen was likely increasing.

The NYT even published Sen. Tom Cotton’s op-ed suggesting the military option, which had majority support at the time, only to face a revolt in its newsroom that led to a bloodbath on its editorial staff. That op-ed ran on June 3. The NYT lost touch with reality on this issue soon thereafter.

Sometime in late June or early July the polling on the riots and what to do about them appears to have stopped. Or, at least, the reporting on the polling stopped. Insert the thinking emoji here. Why would media stop polling on an ongoing issue that is affecting the entire national mood and discourse, the function of some of our largest cities, how we see and depict our history, and, by the way, the upcoming presidential election?

What if the media didn’t stop polling about this? They just stopped reporting on their polls.

Now, why would they do that? Insert that thinking emoji again.

I did find one recent poll reported in The Hill, and it has bad news for those who want to defund the police. Most Americans oppose that, as they consistently have from the start of all this. That poll hasn’t exactly been trumpeted by anyone. It doesn’t ask the broad question of what Americans think about the violence, or what should be done about it.

In the beginning of all this recent unpleasantness, Americans were horrified at the video of George Floyd’s death and broadly supported reforms so that no one else would suffer a similar fate at the hands of police. Several helpful suggestions came forth, from banning chokeholds to curbing or doing away with unions that protect bad police officers.

So do those things, fix the problem, and move on. Right?

As we all know, the peaceful protests gave way quickly to violence as antifa and others opportunistically hijacked the issue. Since then, Seattle, Portland, Chicago, and other cities have suffered ongoing violence. Just look at the Seattle PD blotter from Wednesday night. This is not by any definition a protest. It’s a crime spree. (h/t Hot Air)

At about 9:00 p.m. a group of about 150 people gathered at Cal Anderson park.  The group roamed about the Capital Hill neighborhood, doing massive amounts of property damage, looting, shooting fireworks, and committing arson.

Individuals from the group broke the windows of a business in the 1400 block of East Olive Way and then started a fire inside.  Seattle Fire was called to extinguish the fire.

The group then went to the 1500 Block of 11 Avenue, breaking more businesses’ windows along the way.  Individuals then broke into a business, took merchandise, and put it in middle of the street where they lit it on fire.

The group went to Broadway and Madison, where individuals used baseball bats and pipes to break windows at a store.  They threw fireworks into the store and then began looting.

The group headed to the area of Summit and Madison where they damaged property at two banks.

After leaving the banks, the group returned to Cal Anderson Park and then dispersed.

No arrests were made.  No officers were injured.

Take a good, hard look at that. It’s coming to a city near you if it’s not addressed soon.

That’s what defunding and demoralizing the police looks like. Seattle Mayor Jenny Durkan (D) has made it clear she does not have the Seattle PD’s back. She allowed part of her city, including a police precinct, to be taken over and occupied for weeks. Shootings and murder ensued, but Durkan didn’t care. It was the “summer of love” until the rioters came for her.

Last time SPD officers directly engaged these criminals, several were injured. The city is more likely to prosecute the officers than the criminals (that’s true in several Democrat-run cities now, and police officers know it). So the officers become stenographers and record crime without fighting it.

Maybe police can identify some of the criminals involved in Wednesday’s violence for later arrest. But…probably not. The cities have repeatedly released rioters. So what’s the point?

If you’re a business owner in one of these downtown areas, what do you think about this? Has anyone polled you on the subject?

We’re going to see a lot more police officers in a lot more cities become less proactive and only respond when they are specifically called to respond. Why face emboldened criminals on the streets, backed by criminal sympathizers at city hall and in the prosecutors’ office, when you don’t have to? Why put your life on the line when every mayor is somewhere between Joker and Bane?

You’re more likely to go home to your family at night, and you’re less likely to have some ambitious lawyer ruin your career for their own profit, if you stop being proactive and become reactive — and then, only when you’re actually called. By the time you’re called and arrive, the crime is usually over so it’s safe anyway.

I’m telling you, this is running through the mind of every big-city cop in America. Every. Single. One. They saw what the prosecutor did in Atlanta. They know what prosecutors in most big cities are saying and doing. They’re announcing they will not prosecute “low-level” crimes, and they will hang police officers out to dry whenever they can.

How are criminals processing all this? Well, look at Portland, Seattle, and Chicago.

Why aren’t media polling Americans’ reactions to any of this? I strongly suspect they are. They’re just not sharing the results of those polls, because the polls tell them something they don’t want to hear and certainly don’t want to report: Americans of all backgrounds increasingly detest this violence and they want it stopped.

The Democrats are certainly running interference for all this, calling duly trained and sworn federal law enforcement officers “secret police” and the like. Baltimore State’s Attorney Carolyn Mosby announced that federal officers sent to quell riots will be criminally prosecuted — which is something that the city fails to do to drug traffickers and murderers all the time. Baltimore is a crime-ridden abscess when it could be a gem if it had competent leadership. Democrats have run Baltimore into the ground for decades. Surprise — a few of its recent mayors are convicted criminals themselves.

Who is Mosby’s intended audience? What does her announcement say to criminals in Baltimore — both inside city hall and in its other crime-infested neighborhoods?

Is the Democrats’ communications strategy working? The media will be the last to tell you.

The other reporting we could see from the media, but aren’t, is reporting on the rioters themselves. Who are they? What do they want? What purpose do they want the violence to serve?

When they set a federal courthouse on fire, as they did in Portland, what’s the message? Are they saying we should dispense with the whole system of due process that has developed over hundreds of years? Or are they just being anarchists who want to smash the state and replace it with medieval violence?

Are they Marxists who want to overthrow the government and empower themselves? Will they behave as every Marxist revolution has in the past, and imprison and shoot everyone who gets in their way? What’s their endgame?

These would be useful things for Americans to know.

Media could go ask them. Why aren’t they?

Over at The Federalist, David Marcus asks this question at length.

We are coming to know who these people are, so why aren’t we hearing directly from them? Over at The Post Millennial they have a breakdown of four people, all white, two attorneys, who were recently arrested and charged in the clashes in Portland. Why aren’t CNN or the New York Times reaching out to these people to explain why they think arson, shooting fireworks, throwing bricks, or Molotov cocktails is justified?

Is it because hearing directly from these people would continue to turn Americans of all backgrounds against them, further expose the incompetence and decadence of so many Democrat mayors, further expose the anti-American aims and funding sources behind the violence, and expose the dishonesty and moral bankruptcy of Joe Biden and the entire Democrat Party?

Whip out that thinking emoji one more time.

Minneapolis Is About to Replace Police With…What? We Have Serious Questions.